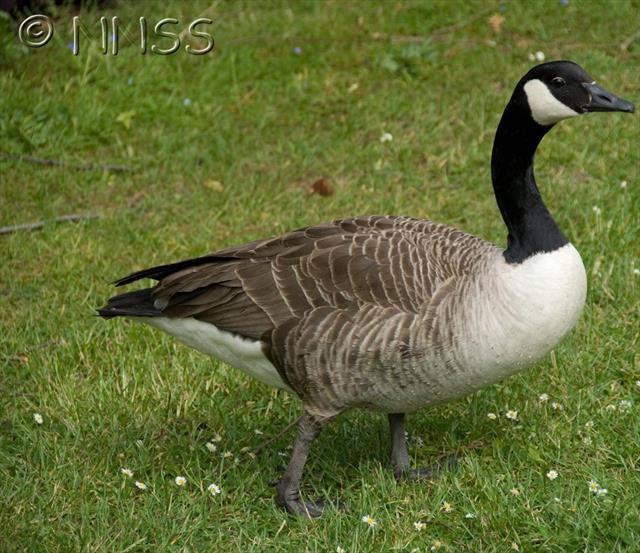 Large wild waterfowl, larger than a mallard with a greyish body, black head and neck with a distinctive white patch on the face behind the eyes. Potentially confused with the Barnacle goose (Branta leucopsis), which have an all white face and the two species of brent goose the dark-bellied (Branta bernicla bernicla) light-bellied (Branta bernicla hrota), which have a less conspicuous white mark on the neck.

Considered a significant pest on agricultural land, damaging crops such as cereals, oilseed rape and sugar beet, contribute to eutrophication of the waters (enrichment with nutrients that can upset ecosystems) where they occur and compete with native waterfowl for food and nesting sites (Watola et al., 1996).

Begin breeding at year 2 but most success increases significantly after year 4, with average brood sizes of 3.7 young for 4+ age individuals in their native range (Raveling, 1981).

Initially introduced into the UK in captivity before 1665, there is no exact record of the first introduction into Ireland but it is thought to be at the beginning of the 19th century (Lever, 2009). Introduced as ornamental birds in the grounds of estates they subsequently spread to the wider countryside. Additionally secondary introductions from the United Kingdom are likely, where there is a population of ~90,000 Canadian geese (Austin et al., 2007).

Found in lawns and gardens, agricultural land and inland water way. Particularly common in urban and sub-urban parks in the United Kingdom, may expand to these areas in the future in Ireland (Austin et al., 2007).

Established - Widespread. Scattered population thought to consist of approximately 1000 individuals, with the majority of the population occurring at 8 breeding sites in Co Cavan and Co Fermanagh (Lever, 2009).

Native to North America where a number of different sub species exist, it has been domesticated and introduced into Europe, including Ireland, Britain, Scandinavia, Germany, France and Austria, and New Zealand (Birdlife International, 2012).

Report any sightings to the National Biodiversity Data Centre. Avoid feeding Canadian geese where they occur as this can exacerbate eutrophication of lakes and rivers.

The Delivering Alien Invasive Species In Europe (DAISIE) project list the Canadian goose as one of the 100 Worst Invaders in Europe.