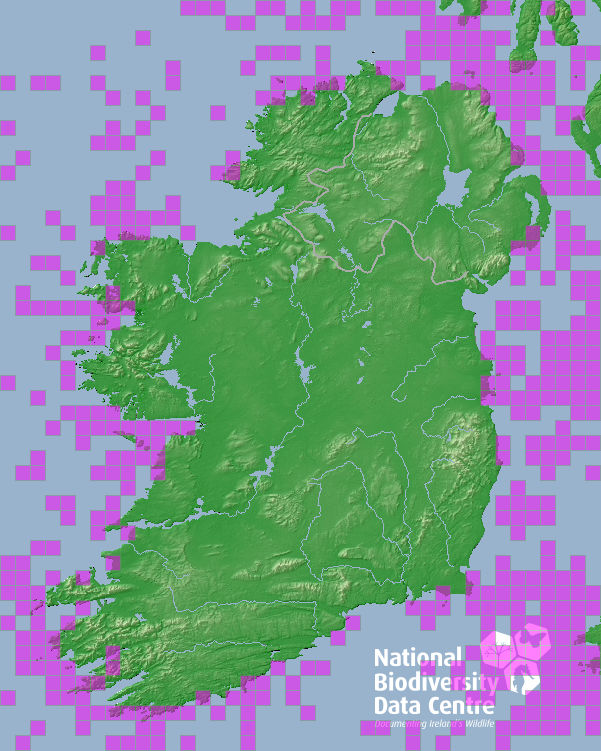 The IUCN Red List classifies the Puffin as ‘Vulnerable’ on a global scale in their most recent assessment (2018) and population trends are noted as decreasing.

The Puffin is a highly recognisable bird that is readily identified by its black back and head with white cheeks, white underparts, bright orange legs and vibrant bill.

An individual with its first winter plumage can be distinguished from a Guillemot by its smaller size, thicker body and larger head.

Being a marine species, the Puffins diet consists of various marine life such as fish and crustaceans.

A favoured food item among the Puffins are sandeels. Countless images can be seen online whereby Puffins are holding large numbers of sandeels in their brightly coloured beaks.

This species is highly associated with marine habitats and will be found on suitable coasts and islands.

Suitable nesting habitat includes burrows or cracks in steep cliffs that are safe from mammalian predators. Offshore islands are particularly suitable as they are much safer.

During the breeding season, a single egg is laid and both parents will take turns incubating the egg for a period of 36-45 days. This egg will weigh approximately 64 grams.

The fledging period can take anywhere from 34 to 60 days.

An average wild Puffin can live for 18-20 years and will reach breeding age at five years.

The Puffin winters in the North Atlantic Ocean and is therefore only found along the Irish coast from March to September (breeding season).

There are a few Puffin hotspots around the Irish coast during the summer months. Traditional breeding colonies occur at The Skelligs off County Kerry, The Cliffs of Moher in county Clare and the Saltee Islands off County Wexford.

The Royal Society for the Protection of Birds: https://www.rspb.org.uk/birds-and-wildlife/wildlife-guides/bird-a-z/puffin/