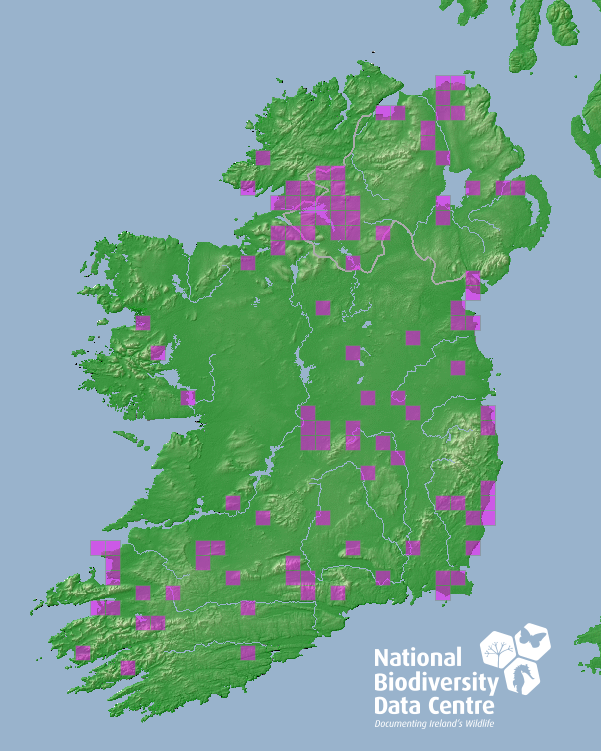 According to the last IUCN Red List assessment in 2016, the Nightjar is a species of ‘Least Concern’ on a global scale. A decreasing population trend has been noted however.

The Nightjar is an elusive, nocturnal species that will most commonly be found hunting for prey at dawn and dusk, rarely seen during daytime.

In addition to its nocturnal nature, this species possesses a highly detailed, cryptic pattern of greys, browns and whites, giving it an incredibly effective natural camouflage to help stay hidden. It is almost always heard rather than seen.

The Nightjar possesses a long tail and sharply pointed wings.

Standing at approximately 27 cm in length and with a wingspan of around 60 cm, the Nightjar is a relatively small bird, weighing 60-100 grams.

The Nightjar is strictly insectivorous, feeding on moths and beetles.

Nightjar will hunt on the wing, catching prey out of the air.

Nightjars are most commonly associated with upland habitats in Ireland such as heathlands, moorland, open woodland and recently planted or clear-felled conifer plantations.

Female Nightjar lays a clutch of 2 eggs, weighing 8.4 grams each in late-May to late-July. An incubation period of 18 days will commence with both the male and female incubating the eggs.

A typical wild Nightjar lives for four years, breeding after the first year.

Nightjar is a very rare summer visitor that visits from tropical Africa, with small numbers breeding each year.

The Royal Society for the Protection of Birds: https://www.rspb.org.uk/birds-and-wildlife/wildlife-guides/bird-a-z/nightjar/