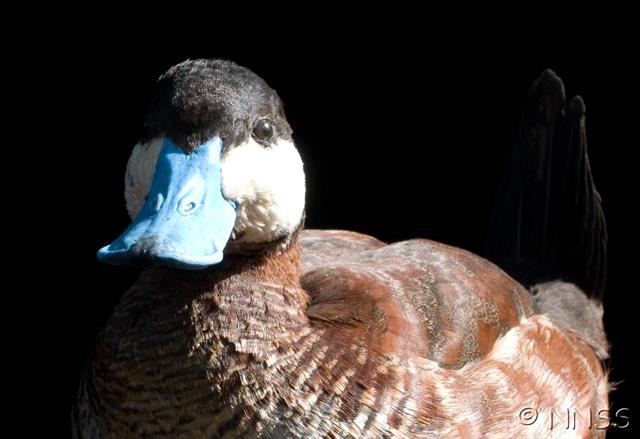 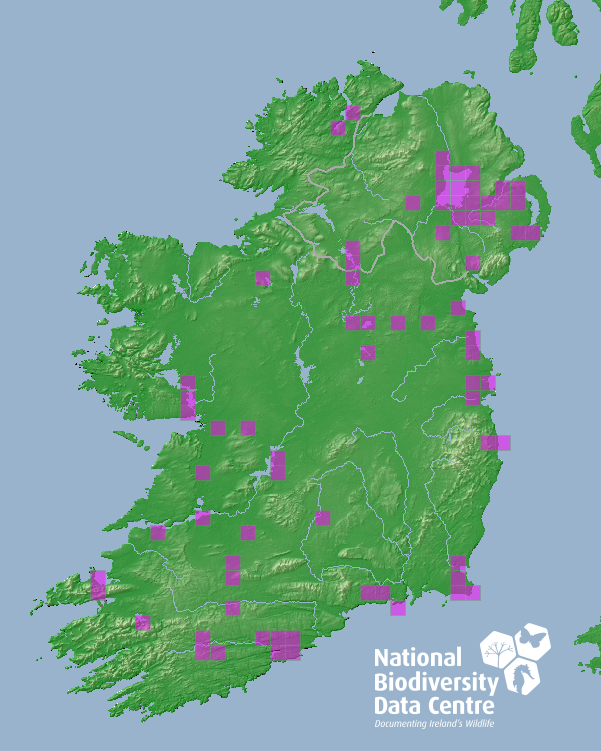 In the Republic of Ireland the Ruddy Duck is protected during its breeding season (breeding birds, nests and eggs). There is however an open season in which you can hunt Ruddy from 1st September to the 31st of January.

"Oxyura jamaicensis (ruddy duck) is a small diving duck with a long tail, often held erect. On an average the females weigh 550g and males around 600g. During the breeding season males can be distinguished from other ducks by a white cheek patch, chestnut red body plumage, and blue bill. Females are distinguished by their body structure and off-white cheek split by a horizontal brown stripe. Both sexes can be distinguished from the white-headed duck by their smaller size, shorter tail, thinner cheek stripe and concave bill profile." (Hughes, 2005).

Ruddy ducks feed on benthic invertebrates, especially chironomid larvae (Hughes, 2005) and may compete with tufted ducks for food (Lever, 2009). May compete with grebes for nesting space and engage in aggressive interactions during the breeding season (Lever, 2009). The main threat and impact of Ruddy ducks in Europe is the hybridised with the endangered white headed duck (Oxyura leucocephala), in Spain (Munoz-Fuentes, 2006).

Breeding strategy is a mixture of monogamy, polygyny and promiscuity, ruddy ducks can relay up to 4 times per season if eggs are lost but there is usually only one brood per year (2-3 young per female per year) (Hughes, 2005).

All ruddy ducks in Europe descend from a founder population of approximately 7 individuals brought to the UK in 1948 (Munoz-Fuentes et al., 2006). From there they have dispersed naturally across Europe, as far north as Iceland (Hughes, 2005).

The main method used in the UK eradication programme was shooting, which was by far the most effective. Nest trapping and egg oiling, while much less efficient were appropriate at some sites (Cosgrove et al., 2008).

Found in freshwater habitats, outside of the breeding season prefer habitats with emergent vegetation (Lever, 2009).

Established - Localised. Population for Ireland is almost certainly less than 150, though exact numbers and distribution are unknown (Lever, 2009).

Native to North America and the Caribbean and having been introduced to Britain, now occurs in Europe, from Scandanavia as far south as Algeria in North Africa (Hughes, 2005).. Population in Europe in 2013 is thought to be less than 7% of the 2000 level due to an international plan to eradicate the species from Europe (Robertson et al., 2015).

Delivering Alien Invasive Species In Europe (DAISIE) project list this as one of the 100 Worst Invaders in Europe. The British population of ruddy ducks was formerly the main source of the European population and a control programs have been in place in the UK since 2006 (Henderson, 2006) and it is now thought to contain less than 30% of the total European population (Robertson et al., 2015).

During the breeding season, ruddy ducks can be extremely aggressive towards other animals, including rabbits, blackbirds and lapwings that could not be considered competitors, (Lever, 2009)