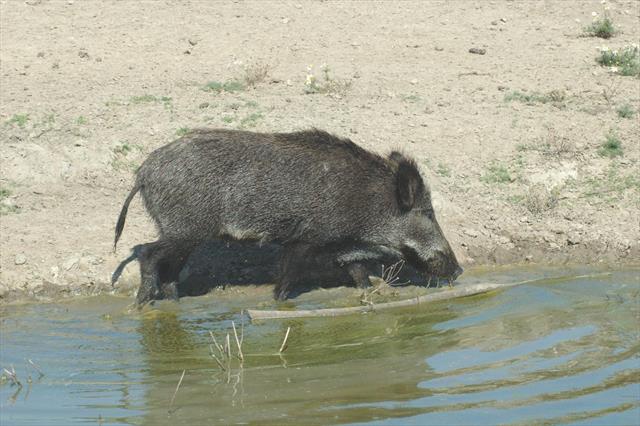 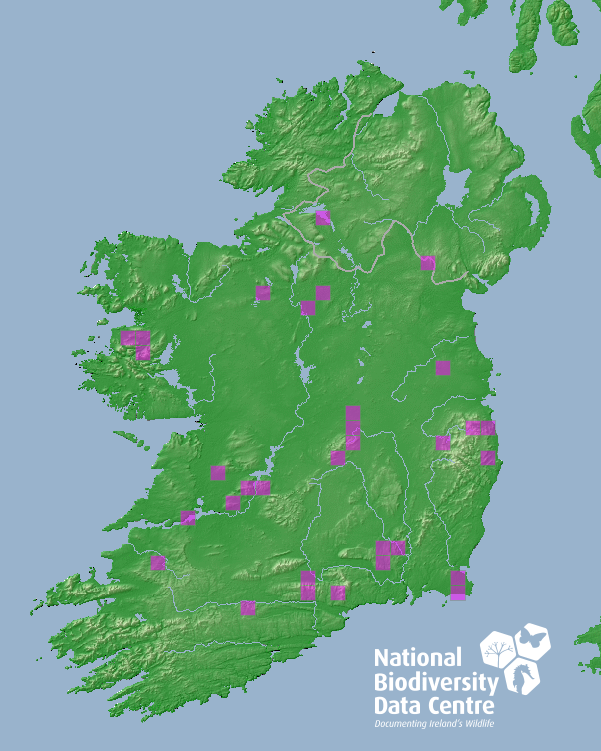 Currently there is no evidence of Wild boar/pig in the fossil records from before humans arrived to Ireland about 9,600 years ago so it is unclear if they are native or not to Ireland (Carden, 2012). However, Wild boar are a direct ancestor to the domestic pig which it can hybridise and from genetic analysis of 15 feral pigs shot in Ireland between 2009 and 2012, the majority belong to the domestic pig category with just three individuals classified as hybrids with Wild boar (McDevitt et al., 2013).

Overall risk of this species to Ireland is categorised as:  MAJOR with a MEDIUM level of confidence.

Excerpt from overall conclusion summary:  The species is likely to be introduced to and/or encounter suitable habitat within the Irish landscape. Its favoured habitat of forest and scrubland, which constitutes about 10% of the Irish land cover, is most endangered to invasion. Sus scrofa at high densities may cause damage to agriculture and natural habitats, threaten native species. Of most concern is the potential for the species to carry diseases which can affect domestic (and wild) animals or humans (Barrios-Garcia and Ballari, 2012).

This description relates to the Feral pig/Wild boar hybrids recorded in Ireland since 2009.

Most animals recorded have a typical Wild boar appearance of a medium-large body (shoulder height about 700mm) with relatively short legs, a large head with a long snout, small erect ears and a straight tail tassled at the tip.  They have a coarse coat, dark brown to black underneath with lighter ends to the hairs and a mane of bristles extending from the neck to the middle of the back.  Some animals have a more reddish appearance indicating they may be Tamworth/Iron-age pig hybrids.  Piglets have pale longitudinal stripes on their body until they are about 6 weeks of age.  Adults can weigh up to 300kg but more typical weights are around 100kg for males and 75kg for females.

Generally, Feral pig are nocturnal animals resting during the day in dense vegetation.  They are fast runners but usually trot from one foraging area to another and then slow to a walk. The extent of its foraging range home range is highly variable and is dependent on food availability. Smell is by far the most advanced of the pig's senses and although they are omnivorous eating both plant and animals, their diet is largely herbivorous (90%).

Both sexes normally reach sexual maturity in the first year of life but female feral pigs usually do not breed before 18 months of age and males tend not to achieve reproductive success until they are fully grown. While Feral pig are a sociable animals forming herds comprising of one or more females and their litter, adult males lead solitary lives outside the breeding season, which is generally Spring in Ireland but dependant to food availability and climatic factors. Females leave the group to nest and give birth. Litters usually consist of between 3 and 12 young and females generally produce one or two litters each season throughout their reproductive lives. Young are weaned in 3-4 months and often leave their mother before the next litter if the mother produces multiple litters in a breeding season. Feral pig are expected to live up to 10-14 years in the wild where they are not hunted. There are no natural predators of feral pigs in Ireland except for humans.

If this species were to become widely established, it could be an invasive species by causing damage to agricultural crops and domestic gardens and by introducing and transmitting various diseases to domestic livestock. Ground nesting birds and small mammals could also be affected by their predation.  Their foraging, primarily rooting disturbance, can reduce plant cover and regeneration (Barrios-Garcia & Ballari, 2012).  While their rooting may also have a negative impact on some woodland plants such as bluebells and on species rich grasslands, low levels of population density are unlikely to cause any significant impact on the flora and may increase plant diversity  (Genov & Massei, 2004).

In Iberia, wild boar are one of the principle reservoirs of bovine TB (Beck et al., 2012) and as the 'wild boar' illegally introduced to the wild in Ireland may not have undergone veterinary screening they may carry additional diseases. The damage to the agricultural economy of Europe by wild boar estimated to be in excess of €80 million per year (Reimoser & Putman 2011).

Polyoestrous females (fertile more than once a year), give birth to litters of 6-10 piglets, with approximately at 50% mortality rate (ISGD, 2005). On Santa Catalina Island in California, females produce 5 young every 0.86 of a year but piglets had a mortality rate of 58% (Baber and Coblentz 1986, in Wolf and Conover 2003).

Due to the widespread range of records in Ireland there has clearly been a number of releases of wild boar hybrids/feral pig in Ireland. The reason for the introduction is unknown, it may be to establish a population for hunting or as part of an attempt to reintroduce the species to Ireland.

Woodland species but they will emerge to feed on adjacent agricultural land, rooting crops such as sugar beet, potatoes and maize (Goulding et al., 2008).

Present in the Wild - Rare.

Verified sightings of Feral pig in Ireland have a scattered distribution with no verified sightings in Northern Ireland.  Most sightings are in upland areas and are thought to be escaped or released animals.  A group of 7 animals recorded on Foynes Island (Co. Limerick) in 2014 is believed to have been a deliberate release.

Native to most of Europe and Asia. Possibly native to Ireland, however this has not been established due to the difficulties in distinguishing wild boar from domestic pigs in fossil remains (Carden, 2012).

There has been some debate over whether the 'Wild boar' populations in Ireland are the reintroduction of a native species rather than an alien invasive species. However genetic analysis has revealed that the 'wild boar' in Ireland are of ‘domestic pig’ genetic cluster (McDevitt et al., 2012).