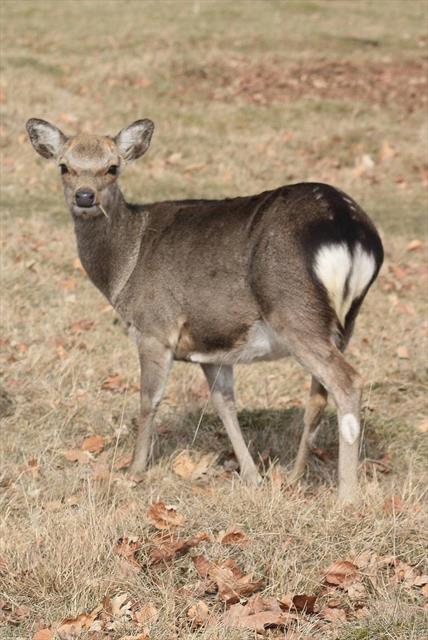 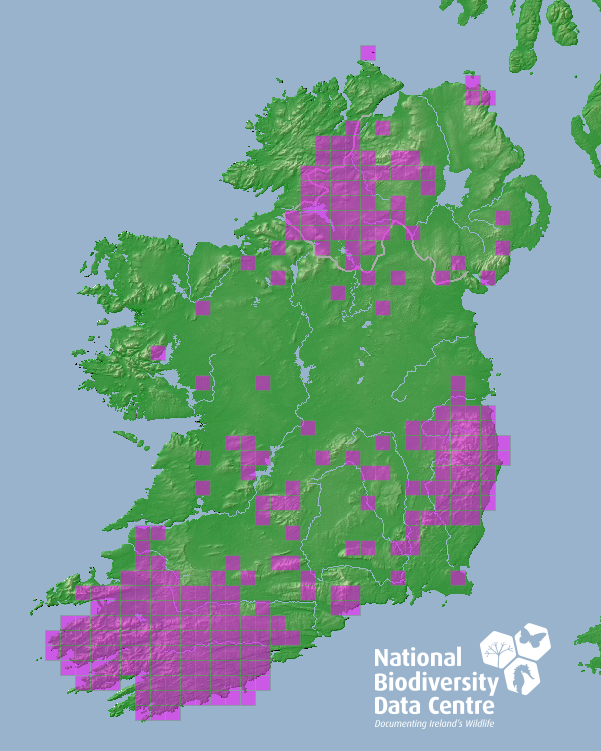 Specified provisions of Regulations 49 & 50 in the European Communities (Birds and Natural Habitats) Regulations 2011 in Republic of Ireland apply to this species (NB Regulation 50 not yet commenced).

Medium sized deer, generally slightly smaller than fallow deer (Dama dama), significantly smaller than red deer (Cervus elephus) though larger than muntjac deer (Muntiacus reevesi) & roe deer (Capreolus capreolus) (Putman, 2009). Summer coat chestnut brown, grey to black in winter with a white patch under the tail characteristic of this species (though hinds can be confused with fallow does), but the black tail is shorter in sika deer, extending only half way over the patch (Putman, 2009). Significant sexual dimorphism with stags (adult males) up to 40% larger than hinds (females), mature stags 70-80cm in height (though some 100-120cm) weighing 40-60kg, mature hinds 50cm in height and weighing 30-40kg (Putman, 2009).

Herbivores, Sika deer tend to feed predominately on grasses and heather throughout their range (Harris, 2015; Putman, 2009), with relatively small home ranges of 60-70ha in young stags, 45-55ha in adult stags and 18-22ha in hinds (Putman, 2009). In woodlands sika deer have been shown to negatively impact on ground flora cover and abundance but the effects of long term exclusion were both positive and negative (Perrin et al., 2011) and can also cause economic impacts due to damaging forestry plantations. However the main impact of Sika deer in Ireland is through their hybridisation with the red deer. Red deer/Sika hybrids have been found in Galway, Mayo, Wicklow (McDevitt, et al., 2009), the Lake district in the United Kingdom and Scotland (Lever, 2009). Indeed the population in Wicklow, the Sika-like deer have been shown to exhibit red deer haplotypes (a set of genetic variations that tend to be inherited together), while in Galway and Mayo the reverse is true (McDevitt, et al., 2009).

Rutting begins in September to early October and may continue as late as February, with a single calf born May-late June, though breeding is rarely synchronised and calves may be born as late as August or September (Putman, 2009). Hinds begin breeding as yearlings, but relatively high reproductive output in sika is offset by juvenile mortality of 30-40% in the first year (Putman, 2009).

Introduced onto the Powerscourt Estate in Wicklow in 1860 by Lord Powerscourt, with several individuals subsequently release in Kerry in 1864 (Lever, 2009). Has since expanded to its present distribution. (Lever, 2009)

Predominately occupying the same habitat as native red deer in Ireland, dense woodlands, but are more adaptable in their habitat requirements so are also found in conifer plantations which is their main habitat in the UK, occasionally found in estuarine reed beds in the UK (Lever, 2009; Putman, 2009). Still kept in parks and woodlands as an ornamental.

Established - Widespread. Species has established in Ireland and its population is concentrated in 3 main patches, Fermanagh/Tyrone, Wicklow and Cork/Kerry. Rare elsewhere but may be under recorded in some areas. Absence of records from the midlands. Underwent a range expansion of 353% between 1978 and 2008 (Carden et al., 2010). Review of the distribution of deer in Ireland in (Carden et al., 2010).

Formerly covered a much larger range from southern Siberia to North Vietnam, now largely confined to Taiwan, Japan and Manchuria (Lever, 2009), thought to be extinct in Vietnam and North Korea (Harris,2015). Widely introduced elsewhere as an ornamental, it has been introduced to the United States, Britain, New Zealand, France and a number of countries in Eastern & Central Europe (Harris, 2015).

Deer are legally protected in Ireland and can only be hunted during certain periods and under licence. The exception to this is the invasive Muntjac deer (Muntiacus reevesi) which has a year round open hunting to allow for control of the species. Contact National Parks and Wildlife Service for more information. Delivering Alien Invasive Species In Europe (DAISIE) project list this as one of the 100 Worst Invaders in Europe.

There is some confusion over the taxonomy of Cervus nippon, with the number of sub species recognised ranging from 2-13. In addition to hybridising with red deer, they have also been reported to hybridise with Chinese Waipati leading to some confusion over morphology (Harris, 2015; Lever, 2009). One of the subspecies Cervus nippon nippon, from Japan and its islands, is thought to be the source of the Sika deer in Ireland (Lever, 2009). In contrast to the Irish situation in Asia the escape of farmed red deer and their hybridisation with the native sika deer is considered a serious threat to the conservation of some populations (Harris, 2015).