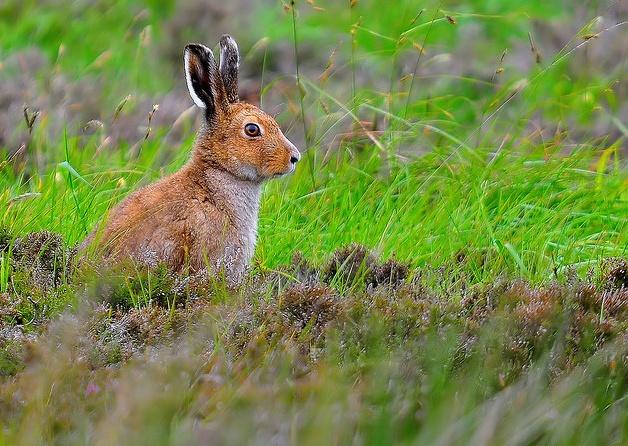 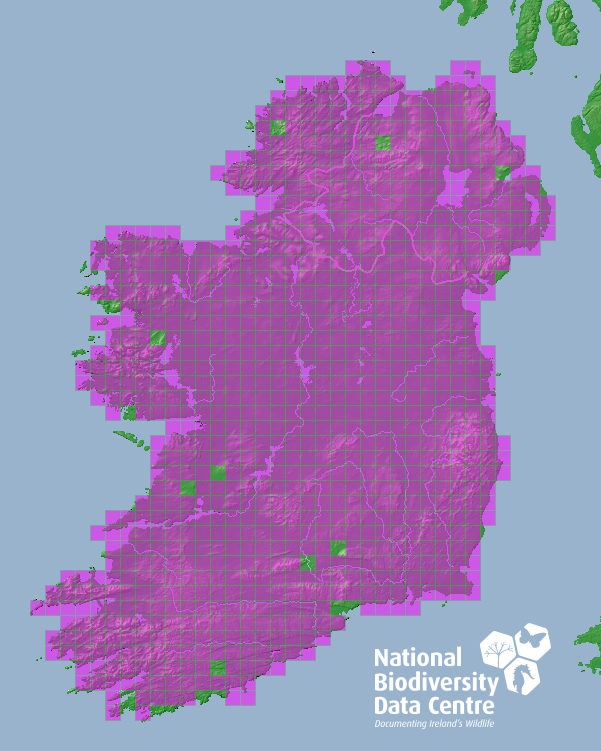 The Irish Hare (Lepus timidus ssp hibernicus) may be hunted in Ireland by the following methods;

Hunting with packs of beagles and harriers,

from September 26th each year to February 28th of the year immediately following, following throughout the state exclusive of the townlands of North East Slob, North West Slob, Big Island, Beggerin Island and The Raven, in the county of Wexford.

The summer coat of Lepus timidus ssp. hibernicus, the Irish Hare, is a reddish-brown, but paler ventrally.

There may be some variation in pelage colouration through the year for some individuals. In other subspecies of Lepus timidus there is generally a moulting to a white winter coat. In subspecies hibernicus this is rarely the case, often there is either no change in colour or very little or the white will be augmented by various patches of reddish brown.

In Lepus timidus the ears, if pulled forward, will only just reach the tip of the nose, in the European Hare (Lepus europaeus) they will stretch beyond it. In the past, the European Hare has been introduced to Ireland  as a quarry species, but the only population that appears to have been self sustaining is one near Strabane in Co. Tyrone, Northern Ireland.

Mainly nocturnal, but can be active in daylight hours especially dawn and dusk.

Inevitably, in most parts of Ireland, the hare seen will Lepus timidus ssp. hibernicus, the Irish Hare.

The length of the Irish Hare is between 52cm and 60cm.

Average weight for females is 3.6kg, average for males is 3.2kg.

One of the common names for the overall species Lepus timidus is the Mountain Hare (another being the Arctic Hare). In the U.K., possibly due to the presence of the Brown Hare (Lepus europaeus) as a native species, Lepus timidus is primarily a moorland and upland species. The Irish Hare however, due to lack of competition with another hare species occupies upland and lowland areas. It has been recorded in bogs, agricultural grassland, arable land and coastal grasslands.

A recent study in Ireland indicated that abundance of the Irish Hare is related to pastoral grassland interpsersed with 'rougher' habitats such as heath, bog and marsh.

These threats include threats also identified in the IUCN Red List at European (2007) and Global (2008) levels wherein two additional  threats that could become relevant in Ireland are identified;

In the Article 17 reporting and all three levels of IUCN Red List assessment the threat to the Irish Hare (Lepus timidus ssp. hibernicus) from the Brown Hare (Lepus europaeus) whether through hybridisation, competition, or as a vector for disease is referred to.

The 2009 Irish Red List of Terrestrial Mammals suggests the following Conservation Action for the species;

The Irish Hare (Lepus timidus ssp. hibernicus) is a subspecies endemic to Ireland.

The species is widespread and likely abundant throughout the island, apart from some western islands.

The National Biodiversity Data Centre is trying to improve our knowledge of the distribution of the Irish Hare in Ireland. Should you observe this species, please submit sightings to add to the database. Detailed observations will assist us gaining a better insight into where the species is most abundant in Ireland and we might also be able to detect regional variations. Please submit any sightings and photographs at: