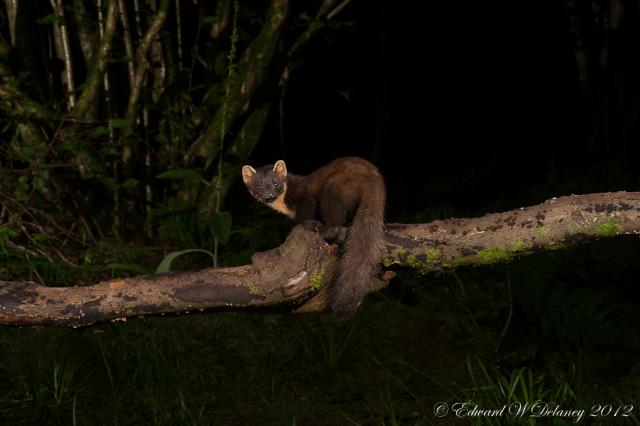 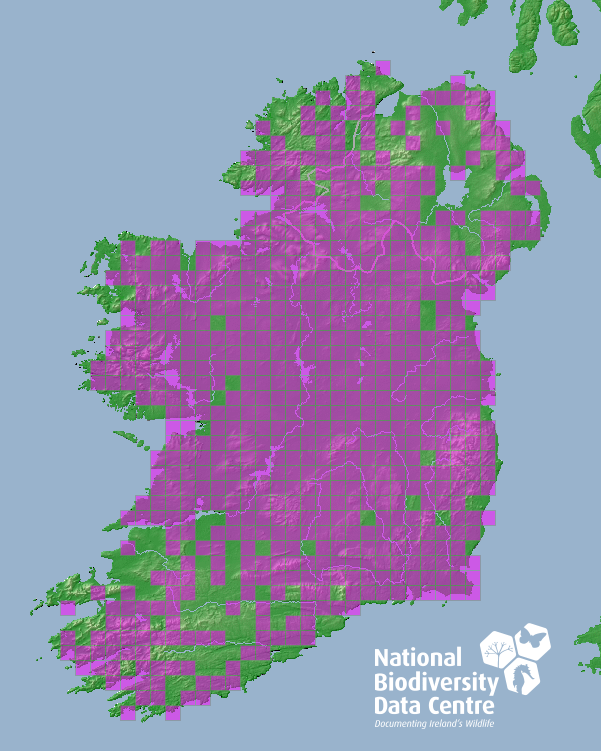 The 2007 IUCN European Red List for this species lists Ireland as one of the countries where it is native.

It is suggested that Martes martes was introduced to Ireland for its fur, but in pre-historic times.

The Pine Marten is a medium sized carnivore, which belongs to the Mustelid group of animals.

Adult Pine Martens are approximately the size a domestic cat, hence Cat crainn [in Irish], with a body length of up to 60cm.

They also have a long bushy tail that can be up to 28cm in length.

Pine Martens have a rich fur coat that is typically dark brown in colour with a distinguishing cream / yellow throat patch or bib and similarly coloured ear tips.

Adults can weigh up to 2.2 kg with males being larger than females.

Pine Martens are relative habitat specialists and require forest or scrub cover to exist in a landscape. In the west of Ireland they may have adapted to relatively open habitats due to historical clearance of woodland habitat.

Pine Martens are largely solitary animals that inhabit a territory that can range in size from 50 to 400 hectares, depending on habitat. On average, males will have larger territories (<300ha) than females (<150ha) and there may be some overlap between individuals.

Mating occurs between adults that are least 2 years old, normally during the summer months.

The species has delayed implantation and gives birth to an average litter size of 2-3 young / kits in spring that weigh less than 30 grams.

A variety of den sites are used to raise kits including cavities in trees, rocky escarpments and buildings.

The kits will typically stay with their mother for up to 6 months and then disperse to locate a new territory.

The average lifespan of individual of this species in Ireland is probably between 3 and 5 years.

The 2009 Irish Red List of Terrestrial Mammals includes the following as a potential threat;

The global and European level IUCN Red Lists include the following as a threat;

Current Pine Marten distribution is largely concentrated in western counties and the midlands of Ireland. The species now occurs in approximately 50% of its historical range. Pine marten remain scarce throughout the majority of Munster and are very rare in Ulster.

The National Biodiversity Data Centre is trying to improve our knowledge on the distribution of the Pine Marten  in Ireland. Should you observe this species, please submit sightings to add to the database. Detailed observations will assist us gaining a better insight into where the species is most abundant in Ireland and we might also be able to detect regional variations. Please submit any sightings and photographs at

All records submitted on line can be viewed on Google Maps – once checked and validated these will be added to the Mammals of Ireland Database and made available for conservation and research.