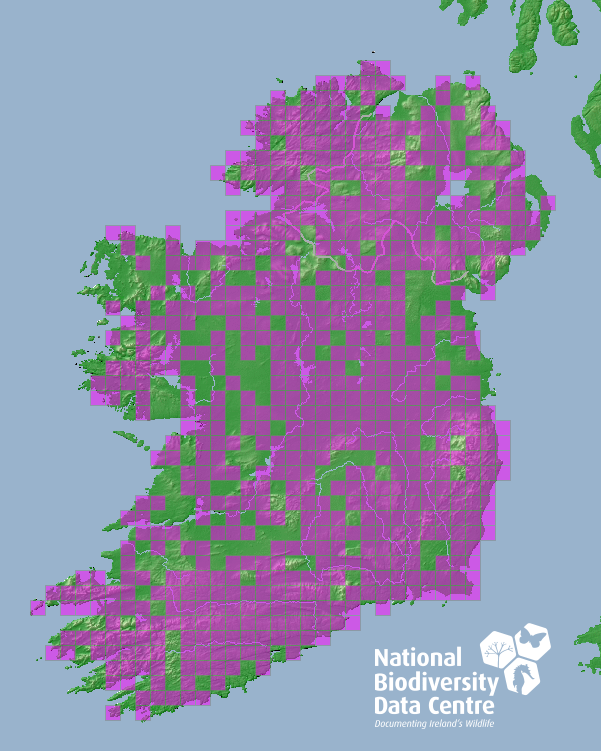 Semi aquatic, medium sized mustelid (family of mammalian carnivores including badgers, otters, pine marten, stoat and the invasive feral ferret), generally dark brown appearing almost black, much smaller than an otter but larger than a stoat or pine marten (Dunstone & Macdonald, 2008). Slightly bushy tail, approximately half the length of the body, generally has a white chin patch (not to be confused with the pale throat patch of a pine marten) (Dunstone & MacDonald, 2008). Sexually dimorphic (males larger than females) which may be linked to niche partitioning, (males and females feeding on different prey items) (Thom et al., 2004)

Polygynous, females maintain territories for the breeding season with males tending to disperse in search of receptive females, breeding season March - April, with 1 litter of 4-6 kits born in May (Dunstone & MacDonald, 2008; Yamaguchi & Macdonald, 2003).

Fur farming of mink in Ireland began in the early 1950s and by 1969 there were an estimated 125,000 mink in captivity in Ireland (Deane & O'Gorman, 1969). In 1961 and again in 1965 approximately 15 mink escaped from a fur farm near Omagh and by 1969 there was a breeding population on the River Stule, Co Tyrone (Deane & O'Gorman, 1969). Subsequent escapes likely followed the same pattern as these early colonists and mink are now widespread in Ireland.

Generally associated with aquatic habitats, favouring riparian habitats with abundant bankside cover but may occur away from rivers where suitably prey is abundant (Dunstone & MacDonald, 2008, Halliwell & MacDonald, 1996). In Ireland, mink appear to be more plastic in their habitat requirements and were found to occur in agricultural landscapes, bog, moor, heath and mire, broad leaved woodland and scrub (Roy et al., 2009). Studies of mink in Scotland suggest that they are more likely to use marine habitats during control programs (Bodey et al., 2010).

Native to North America range extends from Alaska and northern Canada down to mid-west of America (does not occur in dry parts of the USA e.g. southern California, Texas or Arizona, or into Mexico) (Dunstone & MacDonald, 2008).

Delivering Alien Invasive Species In Europe (DAISIE) project list the American mink as one of the 100 Worst Invaders in Europe.