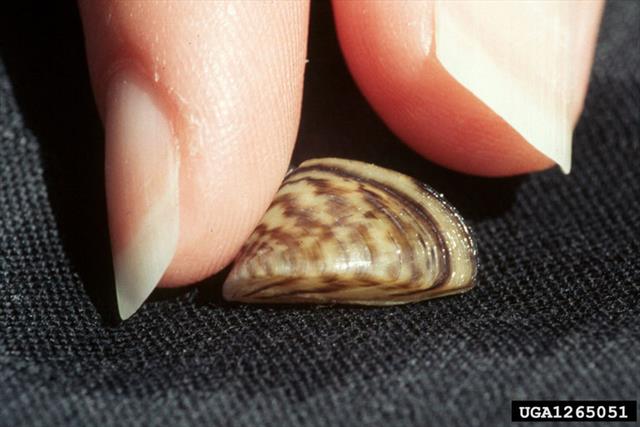 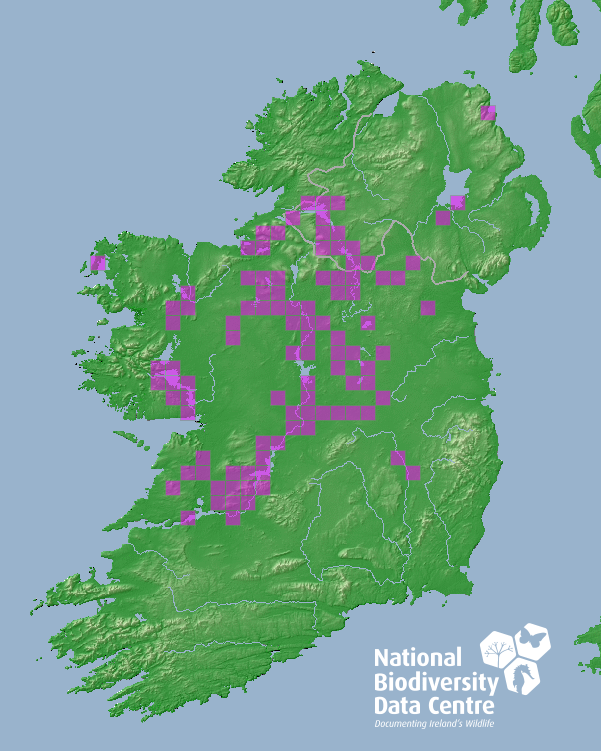 Triangular mussel, much smaller than the edible mussel (Mytilus edulis) seen on sea shores. Dark and light banding on the shell, hence the 'zebra', while the shell itself is extremely thin. May be confused with the Quagga mussel (Dreissena rostriformis), though it is not thought to occur in Ireland at present.

Filter feeders, they can consume large quantities of material from the water column. Have caused decreases in populations of Unionid mussels infected water systems and have expatriated them in Loughs Ree, Derg and Key (Minchin et al., 2005). The high filtration rate of the zebra mussel removes plankton from the water column and deposits it as pseudo faeces on the substrate (Minchin et al., 2005), potentially changing the food webs in the lake. The increased water clarity is also likely to impact on fish behaviour in infected lakes, though no effects have been documented in Ireland to date. It may also facilitate the invasion of other species such as Chelicorophium curvispinum, which was found in association with it (Lucy et al., 2004), in a process known as 'invasional meltdown'.

Dioecious, with a free swimming larval stage, with sexual maturity size dependent, estimates of 30-40,000 eggs/female/year (Stanczykowska,1977). Across its invaded range spawning has been observed to begin at temperatures of 12°C and peak at 17°C (McMahon, 1996), with larva appearing in Ireland at 12.5°C (Lucy, 2006), with peak rates occurring at 15°C (Minchin, et al. 2005). However larvae have been observed at temperatures as low as 7.2°C though these are likely overwintering larvae (Lucy, 2006). Settlement rates of 0.6 x 106 per metre square individuals on horizontal collector plates was measured in Lough Ree (Minchin et al., 2005), though post settlement mortality can range from 20-100% (Lucy, 2006).

Though first recorded in 1997 (McCarthy et al., 1997), subsequent genetic fingerprinting indicated the species was introduced in 1994 (Pollux et al., 2003). The genetic similarity to populations in Britain, field surveys of live mussels on boats transported from Britain and the observation of mussels on boats transported from Britain having undergone a period of exposure to air would indicate that overland transport of infected boats from the UK was the source of the introduction (Pollux et al., 2003). Subsequent spread in Ireland has likely been on leisure boats, by natural dispersal from infected sites, as veligers on damp angling equipment, or even in the guts of migratory fish (Gatlin et al., 2013).

Competition, Predation, Bio-fouling, Interaction with other invasive species, Other

Lakes, rivers, canals & estuaries, attach to most hard surfaces, including boats, quays, rocks and other mussel species, to aquatic plants on soft sediments and can be found at depths of up to 17m (Minchin et al., 2005).

Established - Common. Found through out the Shannon and Corrib river systems, and ability to rapidly spread will allow it to colonise any remaining areas of those river systems. To date no records from Cork, Kerry or the south East, though empty shells were found in the River Barrow near Athy in 2009.

Ponto-Caspian species, native to the drainage basin of the Caspian, Aral and Black Seas.

Report any sightings to the National Biodiversity Data Centre. Obey good biosecurity practices: Check and clean leisure craft when moving from areas containing zebra mussels to uninfected river systems; disinfect, and when possible allow to dry, fishing/angling equipment; disinfect boats when moving from one river catchment to another or upstream within river systems.

The Invasive Species Specialist Group (ISSG) of the SSC- Species Survival Commission of the IUCN -International Union for Conservation of Nature lists the Zebra mussel as 1 of its 100 Worst Invaders. Delivering Alien Invasive Species In Europe (DAISIE) project list this as one of the 100 Worst Invaders in Europe. Two endosymbionts of Dreissena polymorpha were also introduced to Ireland with it, Ophryoglena hemophaga & Conchophthirus acuminatus. (Minchin, 2007). Ponto-Caspian species introduced into Europe via the Suez Canal are often referred to as 'Lessepsian migrants', after Ferdinand de Lessep, the French diplomat in charge of the construction of the canal.