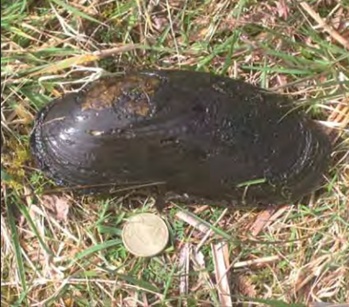 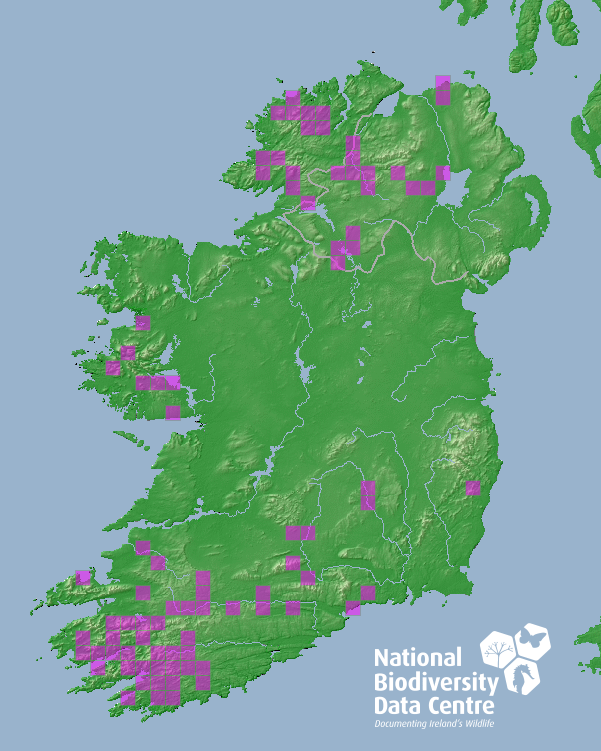 *This assessment is acknowledged as needing to be updated.

One of three Irish freshwater bivalves over 50mm. The Freshwater Pearl Mussel (Margaritifera margaritifera) is the ony one with a heavy, black shell (as an adult) with the umbone (apex) often eroded.  Shell length can reach 9-14cms.

Watercourses with high water quality (Q value) are strongly associated with Freshwater Pearl Mussel populations and especially those populations where there is juvenile recruitment. In Ireland rivers with high Q values are generally at higher elevations with lower stream order.

Populations comprised solely of adults, where juveniles cannot be recruited due to siltation of stream-bed interstitial spaces, still exist in lowland rivers due to the great age achievable by the species.These populations would have been extant before the threats currently faced by the species became prevalent.

Male releases sperm through exhalant siphon which are received  by the female through inhalant siphon.

After fertilization the eggs develop into a larval stage known as 'glochidia'. These are brooded by the female in her gills until being released at about .08mm in length.

In Ireland once released into the the water column the glochidia, if inhaled by Atlantic Salmon (Salmo salar) or native Brown Trout (Salmo trutta), will attempt to attach to the gills of the fish.

The release of glochidia by female Freshwater Pearl Mussel in Ireland is timed between August and September and c. 9 million can be released per female.

The glochidia will remain attached to the fish host until of a size to survive independently. Within a year from attatchment to the fish host the glochidia will drop off and bury themselves completely in the substrate where they will remain for about 5 years. Buried in interstitial spaces and filter feeding renders this young stage of the Freshwater Pearl Mussel highly vulnerable to stress or death in the event of silt build-up.

Sexually mature between 7 and 15 years and can live to over 100 years of age.

These threats accord well with the threats outlined in the 2011 European level IUCN Red List for the species which also included as threats;

The 2009 Irish Red list of non-marine molluscs identified the following as major threats to the species;

The finding that 90% of populations in Ireland are unlikely to breed again as a result of the impact of these threats was re-itereated in the account for Margaritifera margaritifera.

In the Article 17 Habitats Directive reporting for the period 2007-2012 Conservation Measures implemented or being implemented during the period were;

Found throughout the north temperate zone, ranging from the east and west coast of North America to the British Isles and Scandinavia, with populations scattered throughout mainland Europe.

The National BiodiversityData Centre is trying to improve our knowledge on the distribution of the Freshwater Pearl Mussel in Ireland. Should you observe this species, please submit sightings to add to the database. Detailed observations will assist us gaining a better insight into where the Freshwater Pearl Mussel is most abundant in Ireland and we might also be able to detect regional variations. Please submit any sightings and photographs at:

Moorkens, E. A. (1999) Conservation Management of the Freshwater Pearl Mussel Margaritifera margaritifera. Part 1: Biology of the species and its present situation in Ireland.Irish Wildlife Manuals, No. 8.