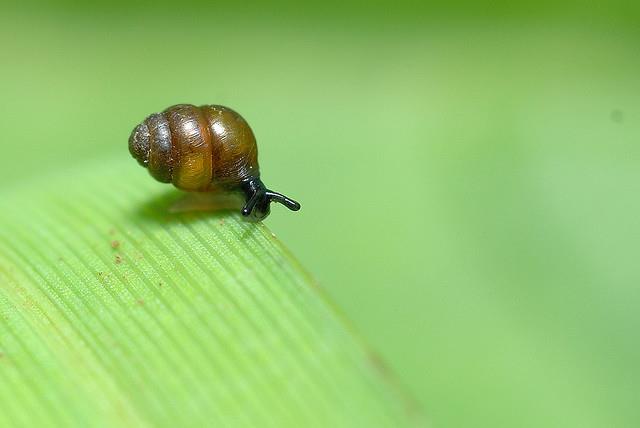 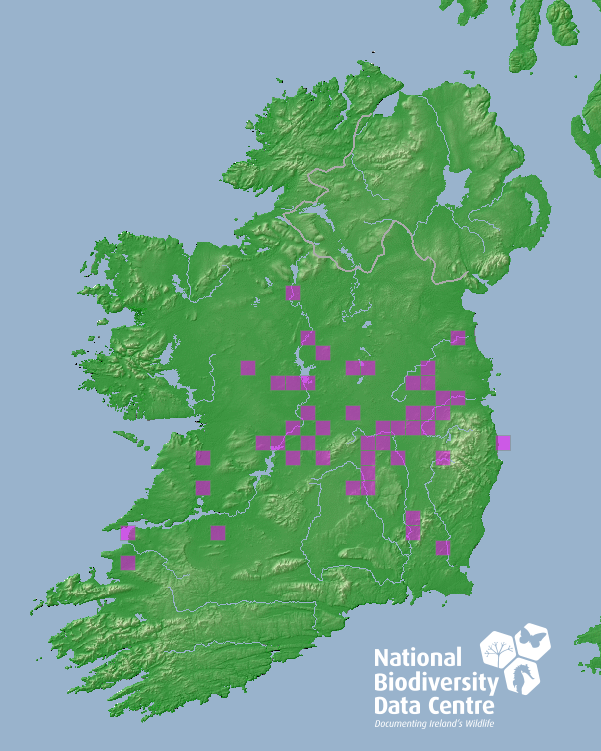 Desmoulin’s Whorl-snail (Vertigo moulinsiana) has a black head and tentacles and a pale grey body. The shell is translucent and varies from a pale yellow to a reddish-brown occasionally with dark banding. Old shells are a greyish-brown.Very fine striations on the shell are not immediatley obvious but may be seen with a hand lens.

Shell size is to 2.7mm only, but it is still the largest native Whorl-snail in Ireland. Shell mouth opening is to the right of the shell (dextral), with 4 teeth obvious at the shell mouth. The lip of the shell is relatively large and flares out, and is connected to teeth by pale opaque 'callosities' (thickenings of the shell).

The whorl nearest the mouth is the largest making up almost 66% of the shell. This description is for a fully developed adult, younger individuals will vary in shell shape being more conical and the teeth at the shell mouth being less well developed.

Optimal habitat is where water level is at or slightly above ground level for much of the year, with a good cover of tall sedges and grasses. Most often found in calcareous conditions.

The species is hermaphrodite and is capable of outcrossing and also capable of self-fertilization. There is little available research on the life cycle of Vertigo moulinsiana.
Studies of British populations suggest high juvenile mortality rates in winter resulting in low densities and numbers with majority adult populations by mid-June. Numbers of juveniles increase through summer forming majority juvenile populations by mid-October.

Life span to 1-3 years, but majority dying in the year after hatching.

*In the species notes for the Article 17 Reporting 2007-2012 period it its specified that this relates to 'management and possible re-opening of disused canals'.

In the IUCN European Red List for this species Version 2014.2 some additional threats are identified at a European level which include;

In the Article 17 Habitats Directive reporting for the period 2007-2012 no Conservation Measures were outlined other than;

Desmoulin’s Whorl Snail occurs in Europe from Ireland to Russia, and is also found in north Africa however its distribution is mainly concentrated in western and Central Europe.

The National BiodiversityData Centre is trying to improve our knowledge on the distribution of Desmoulin's Whorl Snail in Ireland. Should you observe this species, please submit sightings to add to the database. Detailed observations will assist us gaining a better insight into where Desmoulin's Whorl Snail is most abundant in Ireland and we might also be able to detect regional variations. Please submit any sightings and photographs at:

All records submitted online can be viewed on Google Maps – once checked and validated these will beadded to the database and made available for conservation and research.