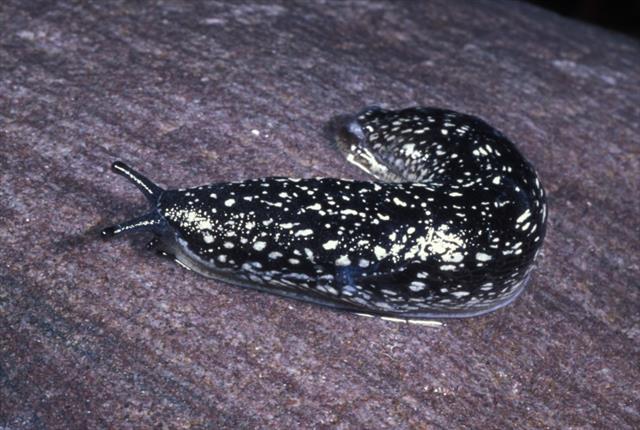 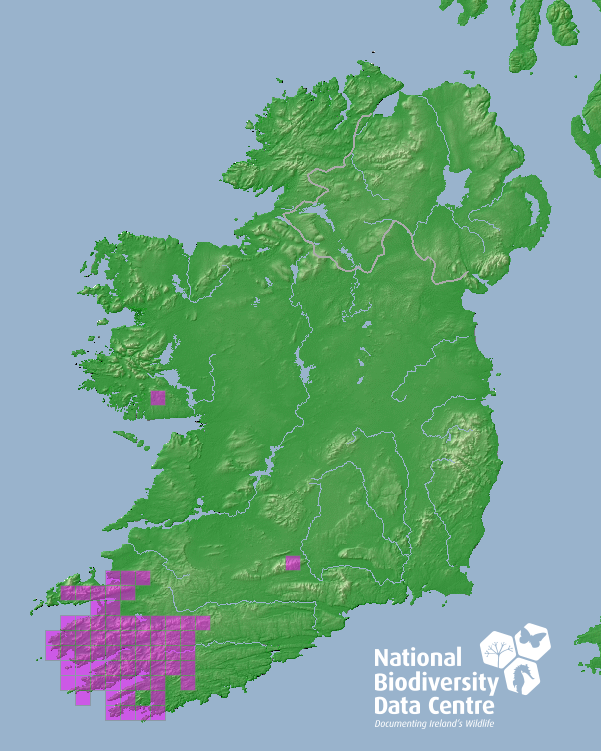 
* This species is only recorded in the wild from Spain, Portugal and Ireland so the global assessmnet may be interpreted as the European assessment.

**This assessment is acknowledged to be in need of updating.

- brown with cream or off-white flecks

-black / grey with white or off white-flecks.

In Ireland the Kerry Slug (Geomalacus maculosus) is very much associated with Devonian Old Red Sandstone geology in south west Ireland. In that area the species occurs in woodland, open heath and blanket bog. A population has been recorded in rocks around a lake on limestone, although the lake is of relatively low pH and there is peat deposition. A population has recently (2010) been recorded in conifer plantation on granitein Co. Galway.

At least in open areas, the species appears to require the presence of rocks, possibly for shelter in hot and / or dry periods.

The presence of lichens for feeding and bryophytes for feeding but more likely shelter, also seems important.

Eggs laid July - October and take 6 to 8 weeks to hatch. Sexually mature in second year. Life-span to 6 years or so.

I* From notes in the Article 17 reporting for the 2007-2012 it would appear that the reference to 'invasive non-native species' is specifically to incursion of Rhododenron spp into semi-natural habitats, particularly woodlands, used by the Kerry Slug (Geomalacus maculosus).

In the Article 17 Habitats Directive reporting for the period 2007-2012 Conservation Measures implemented or being implemented during the period were;

The Kerry slug (Geomalacus maculosus) has a restricted distribution, limited to the south west of Ireland and the north west of Iberia (Spain and Portugal).

Current known main populations are located in the south west (Cork and Kerry) with a recently (2010) discovered population in Co. Galway.

The National BiodiversityData Centre is trying to improve our knowledge on the distribution of the Kerry Slug in Ireland. Should you observe this species, please submit sightings to add to the database. Detailed observations will assist us gaining a betterinsight into where the Kerry Slug is most abundant in Ireland and we might also be able to detect regional variations. Please submit any sightings and photographs at:

Reich, I., O’Meara, K., Mc Donnell, R.J. and Gormally, M.J. (2012) An assessment of the use of conifer plantations by the Kerry Slug (Geomalacus maculosus) with reference to the impact of forestry operations.Irish Wildlife Manuals, No. 64. National Parks and Wildlife Service, Department of Arts, Heritage and the Gaeltacht, Ireland.