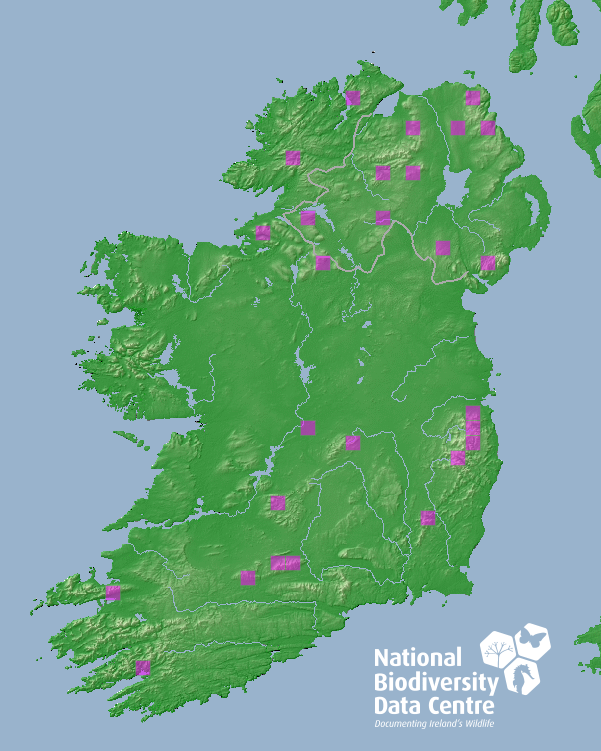 *Although not published separately, an evaluation of 'Least Concern' at a European level is indicated in the Ireland Red List No.8: Bryophytes. This evaluation was carried out under the auspices of the European Committee for Conservation of Bryophytes.

Sphagnum russowiiis one of a group of twelve Irish Sphagnum taxa (including 4 subspecies) that are often referred to collectively as section Acutifolia. In this group the defining characteristics are primarily microscopic e.g. that branch leaves have up to 3 large pores (between 8µm and 30µm) on the underside, and that chlorocyst shape is approximately triangular, the base of the triangle most visible from the upperside of branch leaves.

Within this section Sphagnum russowii usually has some red or pink colour, or may be all over deep red or, rarely, all green.

Many records are from upland areas but the species is recorded also from lower altitudes. Literature suggests a preference for north or east facing slopes, where the species occurs at altitude. Sphagnum russowii is recorded from intermittenlty flushed upland sites in a variety of upland habitats and also unflushed sites. There are rare records of occurence in basic springs.

In the Article 17 Habitats Directive reporting for the period 2007-2012 no threats were listed for this species. In that reporting period the named Sphagnum species of the Habitats Directive occurring in Ireland were given an 'Overall Assessment of Conservation Status' of 'Inadequate' due to;

Mainly recorded from upland areas away from the centre and mid-west.

The National Biodiversity Data Centre is trying to improve our knowledge of the distribution of Sphagnum russowii  in Ireland. Should you observe this species, please submit sightings to add to the database. Detailed observations will assist us gaining a better insight into where the species is most abundant in Ireland and we might also be able to detect regional variations. Please submit any sightings and photographs at: