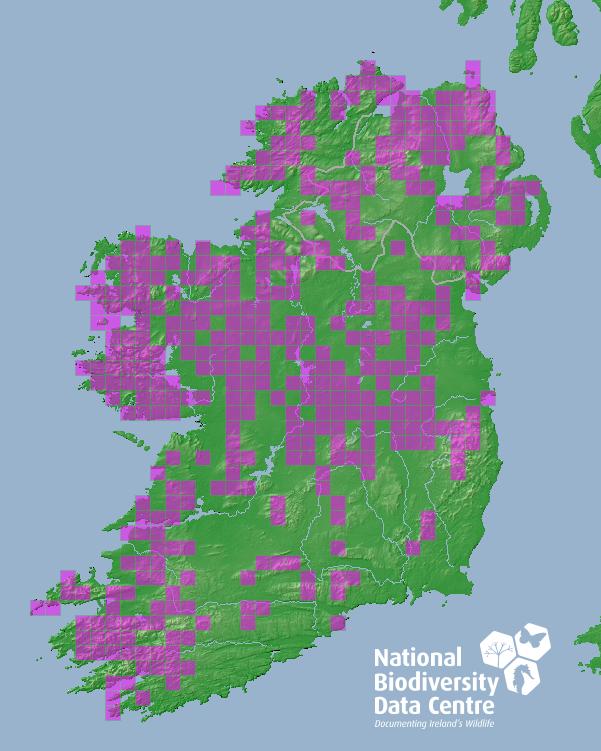 Sphagnum cuspidatum is one of a group of 6 Irish Sphagnum species that are often referred to collectively as section Cuspidata.

A species very much associated with wetter and more acidic habitats. In bogs it is more likley to be found in pools, runnels and depressions and / or at the edges of these.

Northern and Southern hemisphere, and mainly in areas adjacent to oceans. Most European records from Ireland and Britain, Sweden, Norway, Denmark, the Netherlands. Records also from mountainous areas of central Europe and northern Iberia as well as southern Greenland.

Records from eastern and western seaboards of North America as well as from central America and South America. Records also from Japan, Madagascar, Australia and South-east Asia.

S. cuspidatum is widepread in Ireland, but perhaps less common in the south and east. It is common in suitable habitat.

The National Biodiversity Data Centre is trying to improve our knowledge of the distribution of Sphagnum cuspidatum in Ireland. Should you observe this species, please submit sightings to add to the database. Detailed observations will assist us gaining a better insight into where the species is most abundant in Ireland and we might also be able to detect regional variations. Please submit any sightings and photographs at:

Sphagnum cuspidatum may be found fully submerged, emergent or fully terrestrial and looks very different depending on conditions. S. cuspidatum is dioicous and there are differences between male and female plants- the male often has darker tips to capitulum branches. When fully submerged the 'drowned kitten' appearance can be quite distinctive. In Ireland, terrestrial or emergent forms could be mistaken for S. fallax.