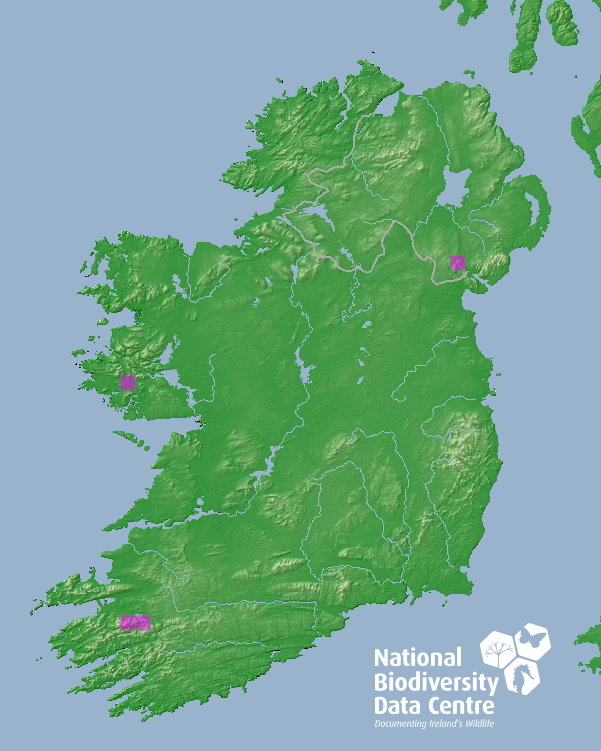 Sphangnum affine is one of a group of Sphagnum species (Section Sphagnum) in which the stem has a wide outer cortex to inner pith ratio (outer cortex occupies about 1/3 or more of the diameter).

Within this group Sphagnum affine never has red or pink colouration in leaves. It's colour can vary from yellowish-green to ochre or dull brown.

In the field, and depending on growing conditions and time of year, Sphagnum affine could be confused with other species (particularly Sphagnum papillosum and Sphagnum palustre) and microscopic examination will be necessary. Examination should focus on such characteristics as the presence of comb-fibrils on the inner wall of both branch leaf cells and stem leaf cells and the triangular shape of chlorocysts in the branch leaves.

There are only three post 1950 records for this species in th Republic of Ireland and one 19th century record in Northern Ireland. It is only relatively recently regared as a species rather than a subspecies. It may be under-recorded, however it is likely quite rare in Ireland.

The species account for Sphagnum affine in 'Rare and Threatened Bryophytes of Ireland' indicates that the following two activities would be considered as major threats to this species, particularly with regard to its current known locations;

The species account for Sphagnum affine in 'Rare and Threatened Bryophytes of Ireland' suggests the following Conservation Actions;

In Europe records are concentrated in Norway, Sweden and Britain with records also from Ireland, Iceland, Denmark, and the Netherlands.It is also recorded in eastern North America.

It has also been recorded in the Azores, the Czech Republic, Finland, Switzerland and Asian Russia (Lockhart, N. et al, 2012a).

Records post 1950 are from three 10km squares. Two of these are contiguous and located in Killarney National Park in Kerry, the third in Co. Galway in the Twelve Bens / Garraun Complex S.A.C.

The National Biodiversity Data Centre is trying to improve our knowledge of the distribution of Sphagnum affine in Ireland. Should you observe this species, please submit sightings to add to the database. Detailed observations will assist us gaining a better insight into where the species is most abundant in Ireland and we might also be able to detect regional variations. Please submit any sightings and photographs at: