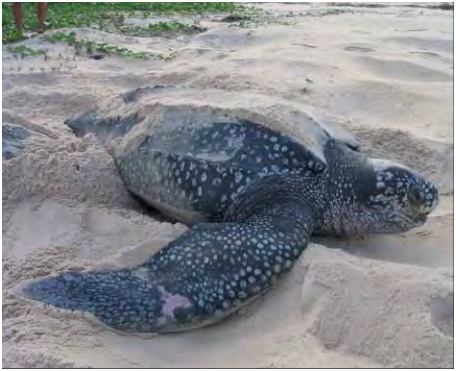 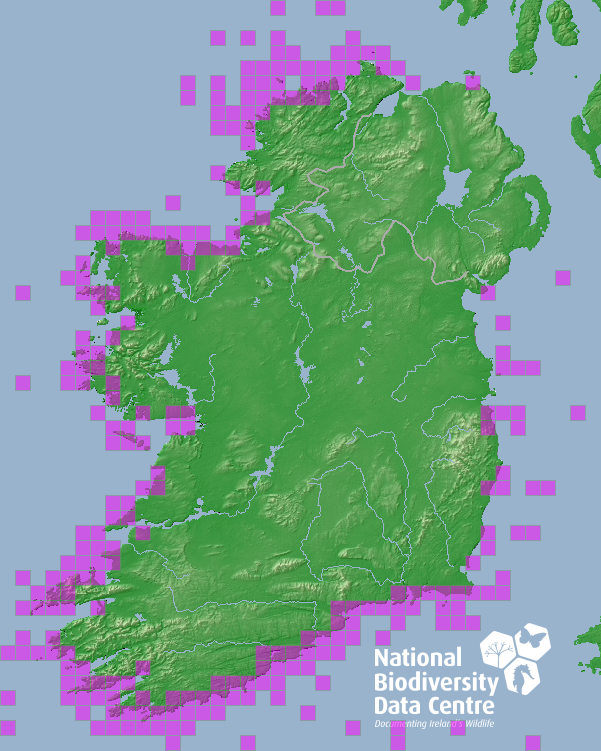 * There is currently great uncertainty as to the population ecology, range and habitat usage of Dermochelys coriacea in the east North Atlantic,  hence the use of 'unknown' for all parameters.

*This population is considered most likely to occur in European waters.

** It is less likely that significant numbers of this population may occur in European populations.

The 2013 IUCN Global Red List for this species lists Ireland as one of the countries where it is native.

Dermochelys coriacea has what has been described as an 'atypical migration pattern'. The species must return to warm tropical waters to breed however females do not breed every year. Instead they spend time between productive temperate waters and warm tropical over-wintering grounds between breeding forays to natal nesting grounds.

It is thought that males may return to breeding grounds more regularly than females.

Very little is currently known about the greater part of the life cycle of the Leatherback Sea Turtle (Dermochelys coriacea)- that part spent at sea.

Main nesting sites for Atlantic populations are the northeast coast of South America and the southern Caribbean as well as Gabon on the west coast of Africa. Hatching takes place over a variety of periods  between March and August for the South American / Carribean sites and between November and April for the African sites.

Females excavate a nest and lay 80-100 eggs during the night, before covering the nest and returning to sea. Eggs hatch after between 6 and 13 weeks and hatchlings head to the sea on hatching.

It would appear that smaller, and hence more likely younger, individuals spend most of their time in tropical and sub-tropical waters, but over a certain size, animals can venture into colder, and more northerly, waters in pursuit of what is thought to be the species main food- jellyfish, returning to nesting sites to mate.

Females may lay up to 6 clutches of eggs in a nesting season.

Much work needs to be done on the study of the movements and migration of Leatherback turtle hatchlings, juveniles and adult males to give a clearer picture of the overall life cycle of the species.

The sub-population that visits Irish coastal waters may well be what is termed the Northwest Atlantic sub-population in the IUCN Red List Version 2014.2 i.e. those nesting in the north east coast of South America and in the Carribean. That population is listed as least concern, however the following threats are identified in the IUCN listing for that population (only those threats that may be appropriate within Irish waters are listed);

The Irish Red List of Reptiles, Amphibians and Freswater Fish (King et al 2011) lists the following threats that may be applicable within Irish waters;

In 'Leatherbacks in Irish Waters' Irish Wildlife Manual No. 32. Doyle, T.K. (2007)  the primary threats to individuals of the species in Irish waters are suggested as being from;

These are now largely illegal in Ireland, but may be used illegally and drift nets are used for other species.

In particular plastic bags which, it is thought, can be mistaken as prey by the turtle. When swallowed the digestive system             disrupted.

In the Article 17 Habitats Directive reporting for the period 2007-2012 no Conservation Measures  in place or in the process of being implemented during the period were listed for this species, however it is acknowledged that this is due primarily to the fact that there is currently insufficient information available on the ecology, distribution and numbers of the species in Irish waters to make an assessment in line with the requirements of the Habitats Directive reporting categories.

The IUCN Red List suggested Conservation Actions for the Northwest Atlantic population of this species in Version 2014.2 include;

Suggested Conservation Actions for the Southeast Atlantic population are the same. For both populations 'Harvest Management' is included and could be interpreted as managing the collection of the eggs of the species by humans for food or other uses, which would not be an action applicable to Ireland.

East and west coasts of America and throughout area of the North Atlantic. Populations have also been recorded in coastal areas of Australia (especially south coast). Generally fewer records from southern hemisphere.

The National Biodiversity Data Centre is trying to improve our knowledge on the distribution of the Leatherback Sea Turtle in Irish waters. Should you observe the species, please submit sightings to add to the database. Detailed observations will assist us gaining a better insight into where the species is most abundant in Ireland and we might also be able to detect regional variations. Please submit any sightings and photographs at: