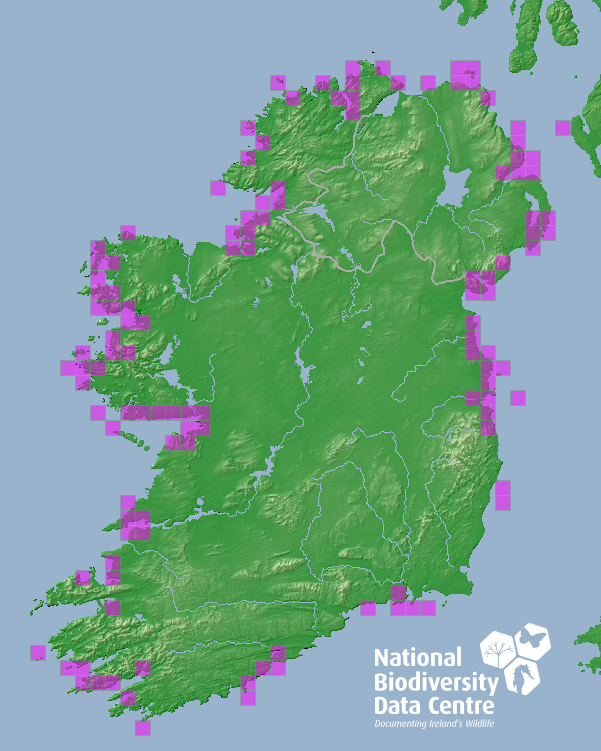 Cyanea capillata is not afforded legal protection in Ireland.

Key identification features include:
•    Large saucer-shaped umbrella divided into 8 lobes with deep clefts in-between
•    Umbrella can be 30 to 80 cm in diameter (sometimes larger)
•    Colour usually yellowish brown or reddish
•    The tentacles are located on the subumbrella surface bell (underneath), some distance away from the umbrella (bell) margin
•    Tentacles are arranged into 8 groups of 70 to 150 tentacles in each group
•    Oral arms are the same length as the diameter of the umbrella and are very membranous and curtain-like
•    The gonads hang freely beneath the umbrella

C. capillata is a coastal northern boreal species. It is a pelagic animal found in surface waters right and throughout the water column. The benthic polyps are found on hard substratum such as rocks but also man-made structures such as pontoons in shallow, sheltered bays.

C. capillata reach sexual maturity in the summer. Eggs are fertilized in-situ in female medusae before they are released as free-swimming planulae. These attach to suitable substratum to form polyps called “scyphistoma”. The polyps strobilate and release free-swimming ephyrae which grow into medusae, completing the cycle.

This species has a circumpolar distribution. It occurs in North Atlantic and Pacific waters. It is common in southern parts of the North Sea and regularly occurs in the western half of the Baltic Sea.

C. capillata is a cold-water species with a marked latitudinal distribution. It is common in the northern half of the Irish Sea, off the north coast of Ireland and down the west coast of Ireland as far as Mayo. In most years it is rarely occurs south of the 53°N latitude parallel. It can be very abundant locally, for example, in Dublin Bay C. capillata is regularly spotted near the Forty Foot bathing spot, around Ireland’s Eye and washes up frequently on the beaches of Counties Meath and Louth. In the Irish Sea highest densities were recorded at 20 to 30 km from the Irish coast. Mostly encountered from June to until late September.