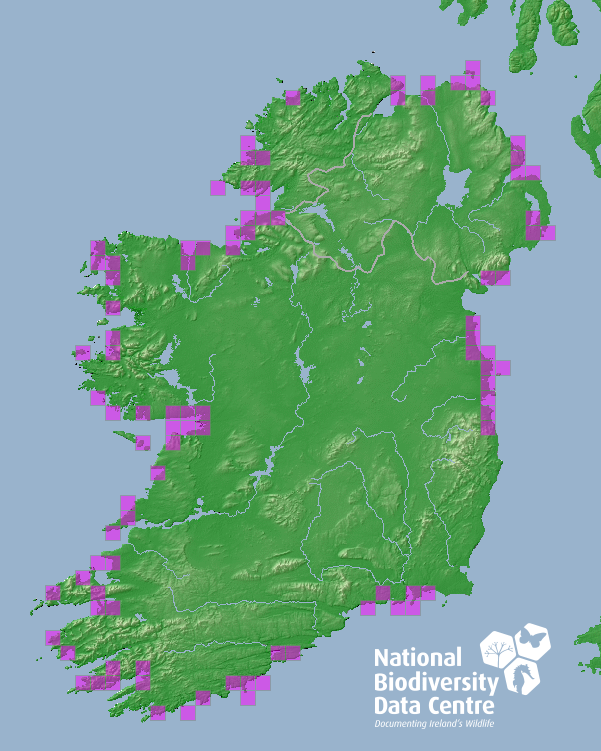 Cyanea lamarckii is not afforded legal protection in Ireland.

Key identification features include:
•    Saucer-shaped umbrella (bell) with 8 lobes divided by 8 clefts
•    Umbrella can be up to 40 cm in diameter
•    Colour usually pale yellow to blue
•    Marginal tentacles arise from the subumbrella
•    Tentacles are arranged into groups of 8 with 40 to 60 tentacles in each group
•    Oral arms are slightly shorter than the diameter of the umbrella and are membranous and curtain-like
•    Four gonads hang freely beneath the umbrella

C. lamarckii medusae are pelagic and are found throughout the water column. The benthic polyps are found on hard substratum such as rocks but also man-made structures such as pontoons in shallow, sheltered bays.

C. lamarckii reach sexual maturity in the summer. C. lamarckii is a more southern species than C. capillata and so tends to appear in the plankton earlier in the season. Eggs are fertilized in-situ in female medusae before they are released as free-swimming planulae. These attach to suitable substratum to form polyps called “scyphistoma”. The polyps strobilate and release free-swimming ephyrae which grow into medusae, completing the cycle.

This species occurs right around Ireland and the UK. It is also common in the German Bight and the Elbe Estuary of the North Sea but has not been recorded in the Baltic Sea. Reports of its occurrence in Iceland and the Faeroes suggest that these are the extreme northern limits of distribution while its southerly limits of distribution remain unclear.

C. lamarckii can be found in all Irish coastal waters. Visual observations from ships of opportunity in the Irish and Celtic Sea found that C. lamarckii occurred in low densities (ca. 0.03 indiv. 1,000m-2) in the north Celtic Sea, were largely absent in the southern Irish Sea and were observed again in the central Irish Sea near the Irish coast.