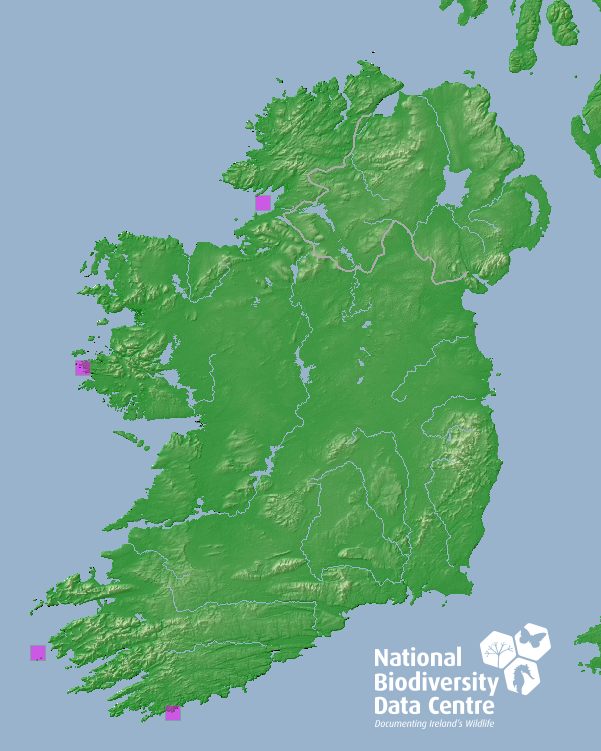 Pelagia noctiluca is not afforded legal protection in Ireland.

Key features:
•    Hemispherical umbrella (bell), with thick jelly and small warts on the bell surface
•    Umbrella diameter up to 10 cm in length
•    4 oral arms with frilly crenulated margins under the bell
•    8 hollow tentacles on umbrella margin that can be 2 – 3 times longer than umbrella diameter
•    Colour varies with maturity, from golden brown (immature) to purple/rose (mature)

P. noctiluca is an oceanic species, found mainly offshore, but can occasionally be found in coastal waters in large aggregations if the oceanographic conditions are right. P. noctiluca is holoplanktonic (spend their entire life in the pelagic zone) and is most abundant in Irish waters during autumn.

P. noctiluca reproduces sexually via direct development, with no fixed polyp stage. Breeding occurs mainly in autumn and winter, and is extended in the warmer Mediterranean Sea. From a fertilised zygote, a ciliated planula develops, which forms a small (1 mm) ephyra after a week. Over the course of 2 – 3 more months, the ephyra develops further into a small golden brown medusa, mature at ca. 6 cm. The entire life cycle takes ca. 1 year.

As an oceanic species, mauve stingers are widely distributed in the Atlantic Ocean, found offshore from the warm Gulf of Mexico and Mediterranean waters to the temperate waters of Ireland and the UK.

The mauve stinger is mostly found along the entire West coast of Ireland, from Donegal to the Celtic Sea, only rarely being swept into the Irish Sea.