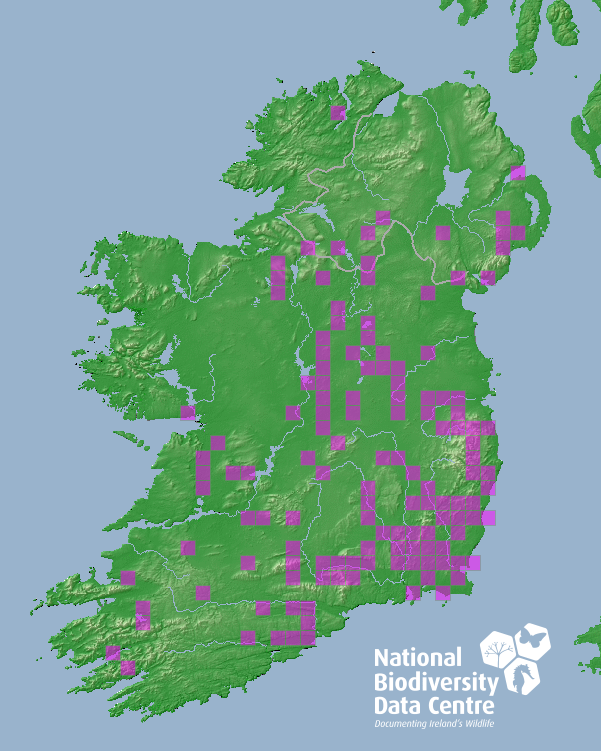 Tall evergreen tree, one of the tallest species in Ireland, up to 65m (Stace, 1997). Similar in appearance to a fir, though not a true fir.

Conifer monocultures significantly increase the transfer of atmospheric pollutants into terrestrial surfaces than hardwoods or short vegetation, leading to acidification of the soil and ground water (Cannell, 1999). Presence of Douglas fir in European woodlands has been shown to reduce fungal diversity, though the number of species of ground vegetation are similar (Schmid et al., 2014), it is difficult to apply these results to an Irish context due to the paucity of native conifers. Possibly due to the lack of congeners (species of the same genus) P. menziesii, has an extremely low number of arthropod species (87 species) feeding on it in Europe despite 130 years plus of forestry plantation than in its native range (257 spp.) (Roques et al., 2006). Schmid et al (2014) note that invasive arthropods that use Douglas fir as a host may present more of a threat to European biodiversity than the trees themselves (e.g. Dendroctonus pseudotsugae - douglas pine beetle).

Woodland, forest and other wooded land; Constructed, industrial or other artificial habitats

Like most conifers produces male and female cones but it is unknown if the species is seeding widely in Ireland (Preston et al., 2004; Reynolds, 2002). There is a lag between planting and invasion, of 15 years in Catalonia, (Broncano et al., 2005). Seedling density is positively correlated with low tree density, small plantation area and grazing pressure (Broncano et al., 2005) suggesting that trees allowed to establish outside of plantations, in semi natural and natural woodlands, may contribute more to the spread of the species into the wild than areas of plantations.

Cultivated since the 19th century, no reliable information exists on the extent of plantations in Ireland, possibly due to commercial sensitivity.

Established - Widespread, widely sown as a forestry plantation and difficult to distinguish deliberate distribution of plantations from self sown trees in the wild. Possibly under recorded, distribution map as shown likely an artefact of recording effort.