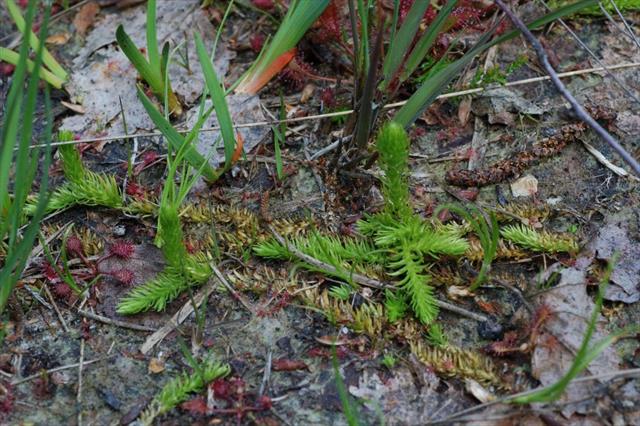 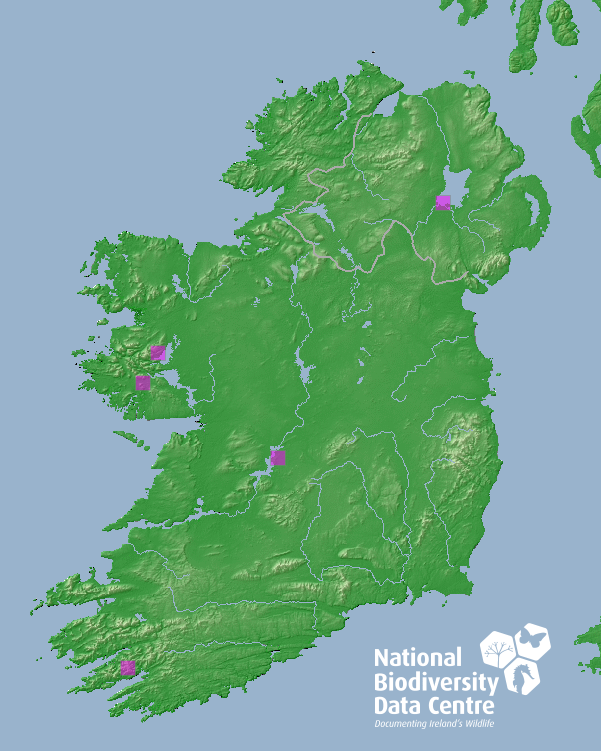 * This Red List is acknowledged as needing to be updated. The Red List category shown is updated from that appearing in the original 1988 document, due to changes to the IUCN Red List categories since then.

The Clubmosses (Lycopodiaceae), and related Spikemosses -also commonly known as Lesser Clubmosses- (Selaginellaceae), look superficially like mosses, however there are some very important distinctions.Lycopodiaceae and Selaginaellaceae  have an organised vascular system including roots for the transport of water,a thick leaf cuticle and, often, a leaf covered rhizome, or main stem; mosses do not.

The creeping main stem can reach between 5 and 20cms.

Creeping stem is only slightly branched and dies back to terminal buds in winter.

The upright branches are un-branched.These may reach 10cms but are usually less.

Leaves are a bright green colour and arranged in spirals.

Leaves are to 6mm in length.

Leaves are lanceolate and do not have fine, white, apical, hair point.

Sporophylls similar to stem leaves but broader at the base.

Sporangia bearing sporophylls are in cones that are terminal on upright branches, however due to similarity between stem leaves and sporophylls cones are not as distinct as in some other Lycopodiaceae.

Cones are borne singly on erect stalks. These stalks bear leaves that are arranged equally along their entire length. In Lycopodium clavatum the leaves on cone stalks are much more widely separated than on the rest of that plant.

Lycopodiella inundata has been most often recorded from bare peat that may be flooded.

The Marsh Clubmoss (Lycopodiella inundata), in common with other Lycopodiaceae, displays classic alternation of generations, with a diploid sporophyte generation and a haploid gametophyte generation. In the case of Clubmosses the sporophyte is the obvious 'plant' identified in the field.

In the Article 17 Habitats Directive reporting for the period 2007-2012 no threats were listed for this species. In that reporting period the named Lycopodiaceae species of the Habitats Directive occurring in Ireland were given an 'Overall Assessment of Conservation Status' of 'Inadequate' due to;

The 2014 IUCN Global assessment has Lycopodiella inundata classified as Least Concern overall, however in some European countries it is assessed as either 'Critically Endangered' (Croatia), Endangered (U.K.), 'Vulnerable' (Estonia, Switzerland), or 'Near Threatened' (Sweden).

The account identifies the main threats to the species as;

As well as listing jurisdictions where the species is protected the 2014 IUCN Global assessment for this species suggests the following conservation action;

Boreo-temperate, northern hemisphere. European records concentrated in Finland, Sweden Norway, Denmark, Germany, Britain and Ireland with scattered records from other central, western and eastern European countries. Records also from Japan. A concentration of records also from both the north-east and north-west coasts of North America.

In Ireland, as in Britain, this is a scarce / rare plant overall.

Recent (2011) findings by the National Botanic Gardens as part of their 'Conservation and monitoring of legally protected fern allies in Ireland'  suggest that for Lycopodiella inundatum some historic populations are no longer extant.

Lycopodiella inundata has historic records concentrated in the west of Connacht and south west of Munster, records elsewhere on the island few and scattered.

The National Biodiversity Data Centre is trying to improve our knowledge of the distribution of Lycopodiella inundata in Ireland. Should you observe this species, please submit sightings to add to the database. Detailed observations will assist us gaining a better insight into where the species is most abundant in Ireland and we might also be able to detect regional variations. Please submit any sightings and photographs at: