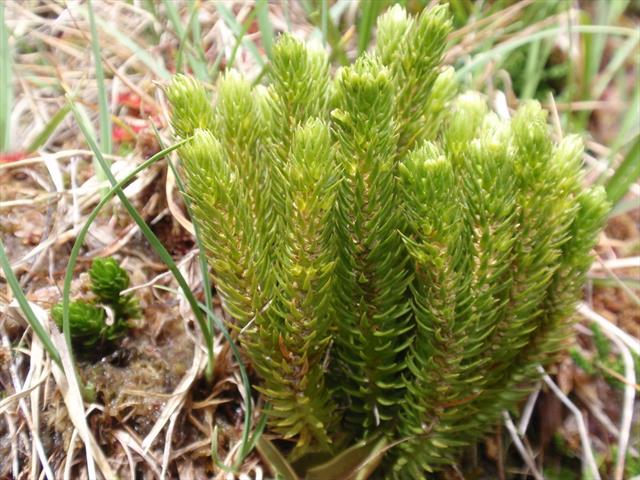 The Clubmosses (Lycopodiaceae), and related Spikemosses -also commonly known as Lesser Clubmosses (Selaginellaceae), look superficially like mosses, however there are some very important distinctions.Lycopodiaceae and Selaginaellaceae  have an organised vascular system including roots for the transport of water, a thick leaf cuticle and, often, a leaf covered rhizome; mosses do not.

Huperzia selago is the native Irish Lycopod that has sporangia arranged in the manner common in Selaginellaceae i.e. not differentiated into a distinct 'cone'.

H. selago has all branches erect and branch lengths are almost equal.

The leaves, including sporophylls, are arranged spirally and are a dark glossy green, narrow laceolate and untoothed, looking almost like the leaves of a conifer, hence the common name Fir Clubmoss.

Sporophylls are grouped into lengths (1-2cms) amongst the non-fertile leaves.

The Fir Clubmoss (Huperzia selago), in common with other Lycopodiaceae, displays classic alternation of generations, with a diploid sporophyte generation and a haploid gametophyte generation. In the case of Clubmosses the sporophyte is the obvious 'plant' identified in the field.

In the Article 17 Habitats Directive reporting for the period 2007-2012 no Threats were listed for this species. In that reporting period the named Lycopodiaceae species of the Habitats Directive occurring in Ireland were given an 'Overall Assessment of Conservation Status' of 'Inadequate' due to;

Historic declines of range and site numbers for named Lycopod species, including Huperzia selago were attributed to ' a variety of pressures' including;

The 2012 IUCN European regional assessment classified Huperzia selago as 'Least Concern' for that region overall, however in some European countries it is assessed as either 'Critically Endangered' (Luxembourg, the Netherlands,Hungary and Belgium) or 'Vulnerable' (Czech Republic). The assessment account does not identify current threats and states that the reasons for current declines are unclear. The account does identify reasons for past declines and these include;

The 2012 IUCN European regional assessment for this species does not list any Conservation Actions.

Irish records come primarily from mountainous areas and particularly from the south- west, north-west and north of the country although mountainous areas of Wicklow and Waterford are well represented. Scattered records from the central lowlands although a number of these latter records are pre-1986.

The National Biodiversity Data Centre is trying to improve our knowledge of the distribution of Huperzia selago in Ireland. Should you observe this species, please submit sightings to add to the database. Detailed observations will assist us gaining a better insight into where the species is most abundant in Ireland and we might also be able to detect regional variations. Please submit any sightings and photographs at: