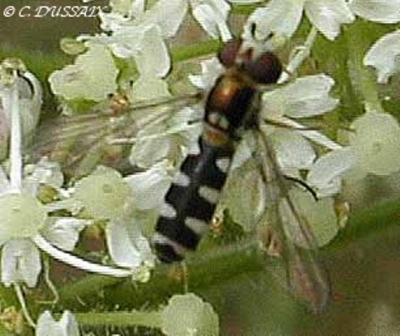 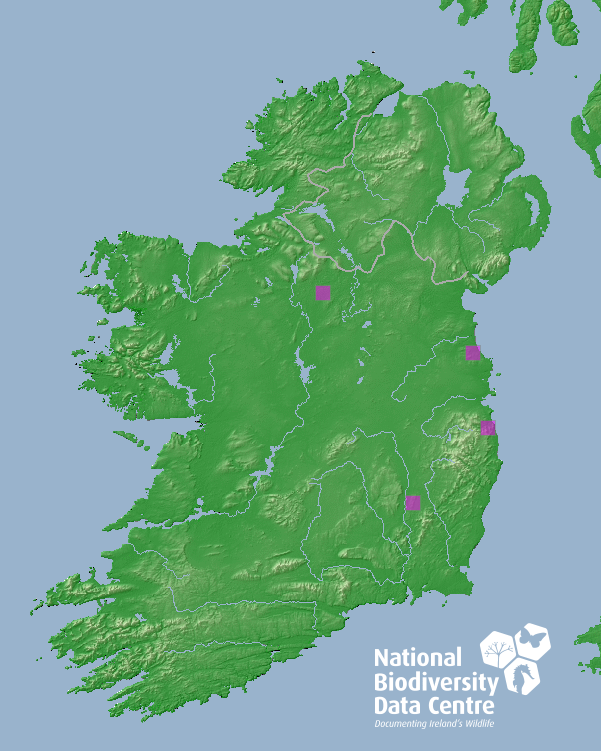 Humid deciduous forest, particularly along rivers; field hedges with mature Fraxinus; mature Salix/Alnus carr; alluvial hardwood forest. Riparian gallery forest of Fraxinus and hedges in farmland with mature Fraxinus seem to be the focus of this enigmatic species in Ireland. Seeing that elsewhere the larvae have been collected from aphid colonies on Acer pseudoplatanus it might be expected that M. guttata would exhibit some association with sycamore here, but this is not the case. This is another syrphid with arboreal aphidophagous larvae on deciduous trees and it shows no capacity to colonise conifer plantations.

Mid June/mid August. Larva: described and figured by Dixon (1960), from larvae collected on Acer pseudoplatanus. Separated from larvae of some other Meligramma species in the keys of Rotheray (1994). Vockeroth (1980) provides a key for distinguishing the puparia of M. guttata and M. triangulifera.

See key in StN keys volume. In recent literature, this syrphid is often treated as a species of Melangyna. The male terminalia are figured by Hippa (1968b). The adult insect is illustrated in colour by Stubbs and Falk (1983), Torp (1984, 1994), van der Goot (1986) and Bartsch et al (2009a). In the field, the male of this species appears almost identical to males of the common and widespread Platycheirus species, P. albimanus (Fab.) and P.scutatus (Mg.), and is probably frequently overlooked for this reason.

Fennoscandia south to the Pyrenees; from Ireland eastwards through much of northern and central Europe into Russia and on through Siberia to the Pacific coast (Sakhalin); in N America from Alaska to Arizona. M. guttata is a Holarctic syrphid, with an extensive range in both Eurasia and N America, but although it is widely distributed in Europe, it is generally infrequent and in some parts regarded as threatened. In southern Europe it is confined to mountainous country and is not known in the Mediterranean zone.

Added to the Irish list by Speight et al (1975). The few Irish records of this species are from the east of the island and not from protected sites. It would realistically be categorised as vulnerable in Ireland and as a candidate for inclusion on any listing of species requiring protection at national level.