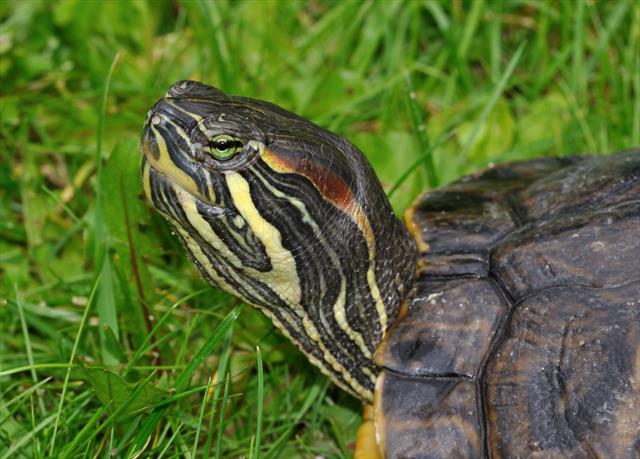 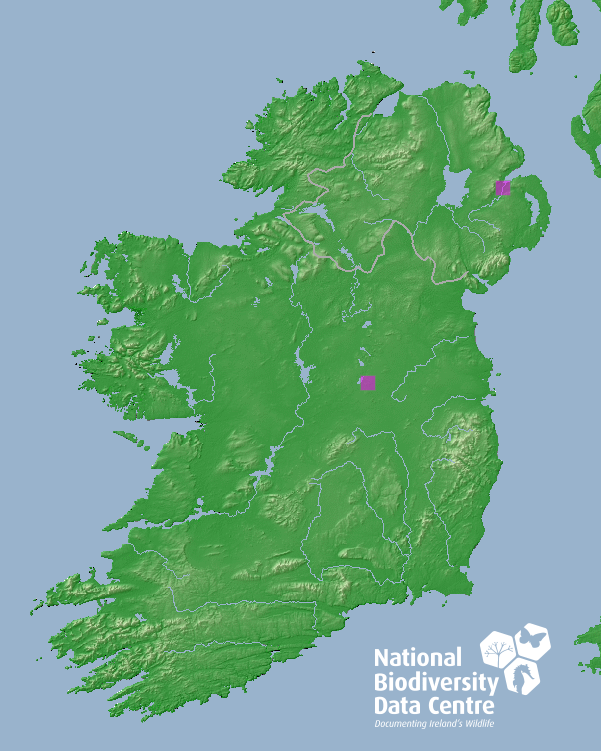 Carapace of this turtle is dark green to olive green to black with green or yellow markings (Wilkinson, 2012). There are 2 yellow stripes posterior and inferior to the eye and extending down the neck .The limbs are narrowly striped yellow and the feet are clawed (Bringsøe, 2006). The females, which are larger can reach 21cm long (Wilkinson, 2012). Sexual dimorphism is further evidenced by the male's long thick tails and curved claws on the front feet (Bringsøe, 2006).

Although impacts in its introduced area remain largely undocumented it may have an impact on biodiversity. This omnivore is a voracious feeder and will eat anything it can catch including invertebrates, fish, waterfowl nestlings, other turtles (Wilkinson, 2012), amphibians, reptiles and small mammals (EEA, 2012). Juveniles are highly carnivorous but become omnivorous as they age. The adults consume large quantities of specific aquatic plants, which may impact wetland plant diversity. May also impact breeding of waterfowl by using nest sites for basking (EEA, 2012).

Its most serious impact is on numbers of already endangered turtle species such as the European pond turtle (Emys orbicularis) and the Mediterraean turtle (Mauremys leprosa) by outcompeting for nesting and basking sites (European Commission, 2017). May also pass diseases and parasites to endangered native species (Scalera, 2006).

These turtles are possible reservoirs for Salmonella, which causes a severe gastrointenstinal infection and can have complications including meningitis particularly for children (EEA, 2012). However, it is unlikely that feral populations represent a real risk of infection to people (Bringsøe, 2006).

The absence of native turtles and the inability of this species to reproduce in Ireland may in practice mean a minimal impact here. However, this is a long lived species (40 years) and so may still have a long lasting local impact (EEA, 2012).

This species does not appear to reproduce successfully at more northerly latitudes as the eggs require 59-112 days of warm weather to hatch (Wilkinson, 2012). The breeding season is May. A complex courtship takes place under water. Up to 30 eggs are laid in a nest in loose substrate. Several clutches are possible each year in warmer climes (Wilkinson, 2012).

Trachemys scripta was a popular turtle in the pet trade and over 50 million were imported into Europe (European Commission, 2017). T. s. elegans was the most popular and widely traded but in 1997 the EU banned the import of this subspecies and trade switched to other species including T. s. troostii (Bringsøe, 2006; EEA, 2012). Bringsøe (2006) reports that the 'other species' were 3-4 times more expensive and therefore imported in much reduced quantities. The small brightly coloured turtles may have been released in urban areas once owners realised the size and longevity of their pets. From there dispersal could occur over a couple of km, though this is most likely by hatchlings and juveniles. Most animals released are adults and so remain at the release site (Wilkinson, 2012).

There is currently an EU wide ban on the sale of this species and personal and zoo ownership are being phased out (European Commission, 2017).

Eradication of this species could be achieved if attempted. The animals can easily be detected in their basking sites predominantly in urban areas (Bringsøe, 2006). A variety of methods can be used including hand capture, nets, pitfalls and fences. The use of baited cages on floating rafts can be very effective. Dogs can be trained to locate and collect turtles and eggs. Egg removal should also be carried out. This can be achieved by following the females back to the nest (EEA, 2012).

In its introduced range it is usually found in parks, lakes, canals and rivers, where there is permanent still or slow flowing water, suitable basking sites (Wilkinson, 2012) and clear oxygenated water for hibernation.

Trachemys scripta scripta can be distinguished by a yellow blotch rather than a stripe posterior to the eye (Bringsøe, 2006).

T. s. elegans can be distinguished by a red or orange blotch posterior to the eye (Bringsøe, 2006).

Found in the upper portions of the Cumberland and Tennessee rivers – flowing through southeast Kentucky & southwest Virginia, through Tennessee and down to northeast Alabama (Bringsøe, 2006).

Report any sightings of turtle species to the National Biodiversity Data Centre.

Natural reproduction is not currently considered possible in this country but future climate change may favour the establishment of this long-lived species. However, since there is now a ban on imports of this species it is unlikely climate change will occur rapidly enough for the current population.

Trachemys scripta elegans is listed by the the Invasive Species Specialist Group (ISSG) of the SSC (Species Survival Commission) of the IUCN (International Union for Conservation of Nature) as one of the 100 Worst Invaders. T. s. troostii is a similar species and is likely to have similar impacts.