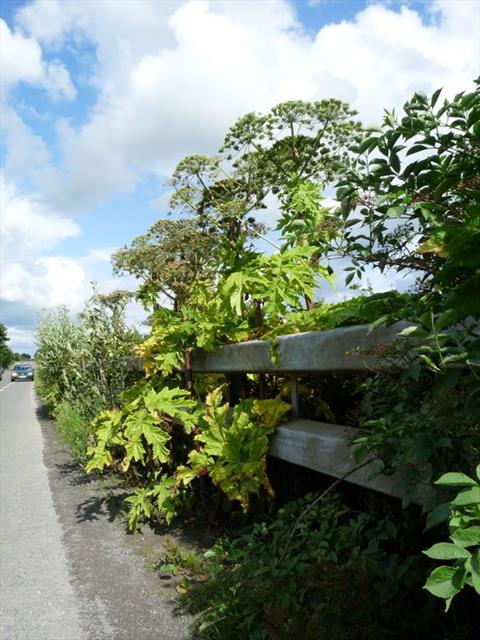 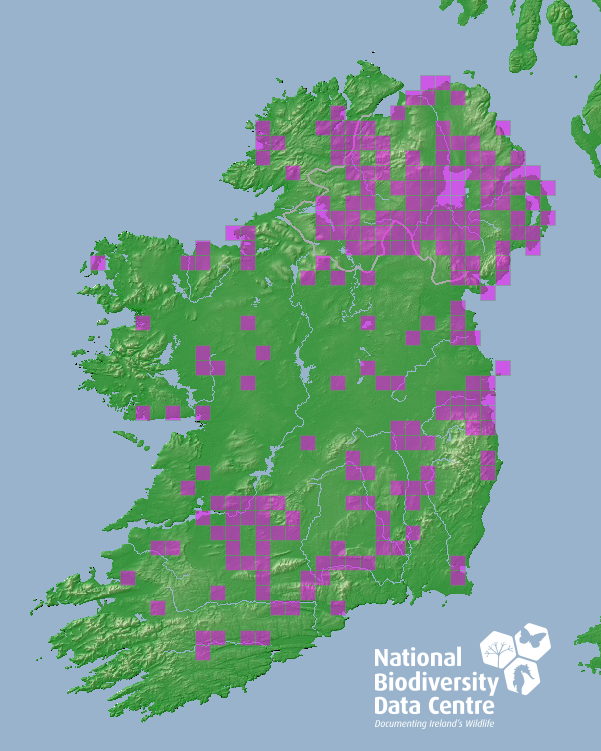 A tall perennial herb (living 3-5 years) with a pale yellow root. Has a single ridged stout hollow stem up to 10cm thick at the base and up to 5m tall, green with purple patches. Leaves are pinnately arranged (leaflets in opposite pairs with one terminal leaf) and large up to 2.5m across.  Flowers are white (rarely pinkish), in umbells up to 80cm across (Tiley et al., 1996).   It can have up to 50,000 seeds per plant that are 0.9-1.5cm long, flat, with oil ducts showing as dark stripes 2 on one side and 4 on the other side.

When fully grown it's 'giant' stature make it readily identifiable. It may be confused with the native Hogweed (Mantegazzianum sphondylium) but this species has a much thinner stem 1-2cm, leaves are not as sharply divided and it is rarely more than 2m tall. If Giant hogweed has been disturbed/trampled then it may not grow to such height but would still retain the large stem, leaf and umbel.

Spreads by seed. After reaching maturity, it flowers, sets seed then dies. This can take 3-5 years. Can form extensive stands and as cover increases can decrease the number of vascular plant species per unit area (Thiele & Otte, 2007). Can cause erosion of river banks when the plant dies back during winter exposing bare soil (Caffrey, 1999) and soil influx into rivers can render gravel substrates unsuitable for salmonid spawning (Caffrey, 1999). May impact on human health as compounds in the sap can cause phytophotodermatitis within 24-48 hours after exposure, with symptoms including: mild to severe erythematours reactions (red colouring of the skin); blistering of the skin; and hyper-pigmentation of burned parts of the skin for months or years (Thiel & Otte, 2007).

Flowers, generally after 3 years, producing large amounts of seed, estimated with estimates ranging from 5,000-29,000 seeds per plant, though the potential seed production may be as high as 100,000 per plant (Tiley et al., 1996).

Popular Victorian garden 'curiosity', it was introduced to Britain and then Ireland in the 19th century (Reynolds, 2002). First noted escape from cultivation was in 1902-1903 in Dublin (Reynolds, 2002).

There is currently an EU wide ban on the sale, growing and keeping of this plant (European Commission, 2017). Protective clothing, face-masks and goggles, rubber boots and gloves must be worn by personnel involved in the control of this species (DARD, undated).

Education of the general public in identification of Heracleum mantegazzianum as well as its human health and ecological impacts would assist in early detection and reduce the number of contacts with the plants. Posters, leaflets, radio and online information would all be valuable. Signs declaring the presence of Giant hogweed and its possible health effects should be posted at infestations.

Hard to reach areas can be cut using scythes (Nielsen et al.,2005). H. mantegazzianum are monocarpic and usually flower at 3 or 4 years (Caffrey, 1999). Only cutting the flowering plants (during mid-flowering) will eradicate seed production and the plants will gradually shade each other out (Nielsen et al.,2005). This is much less labour intensive than other manual methods but should be effective within a few years.

Plants can be dug up using a sharp spade to slice diagonally through the root at least 15cm below soil level (DARD, undated). This should be done in early spring and again in mid-summer (Nielsen et al., 2005).

Glyphosate and triclopyr can both be used for control. Triclopyr is selective for broadleaves but is not approved for use near water. Glyphosate is not selective but certain formulations are approved for use beside water. The first application should be made in early spring with a second application before the end of May (Nielsen et al.,2005). Eradication will require treatment for 4-5 years (DARD,undated).

Cattle and sheep readily eat H. mantegazzianum and grazing will gradually weaken and kill the plants (Nielsen et al., 2005). Stock should be monitored for signs of photosensitisation and digestive problems, which can result from the consumption of the furanocoumarins in the plants (DARD, undated). Dairy animals should not be used as the milk will have an unpleasant odour (DARD, undated). This method can eradicate an infestation within 5-10 years (DARD, undated).

Established - Widespread. Locally abundant, naturalised and invasive (Reynolds, 2002), found along river banks and waste ground, favours damp ground (Reynolds, 2002). May occur initially as a single plant but due to large volumes of seeds produced can rapidly spread within an area (Tiley et al., 1996).

Native to the Caucasus (Tiley et al., 1996), the area between the Black and Caspian seas.

Report any sightings to the National Biodiversity Data Centre

Control and management guidance documents listed here but please note that advice should be sought on best control options for infestations in Ireland and more locally and especially in the use of herbicides.