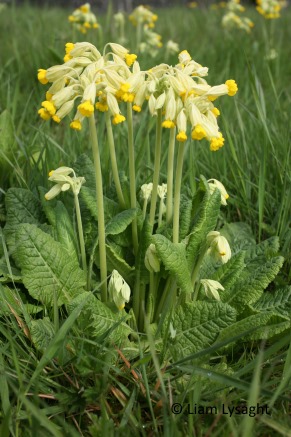 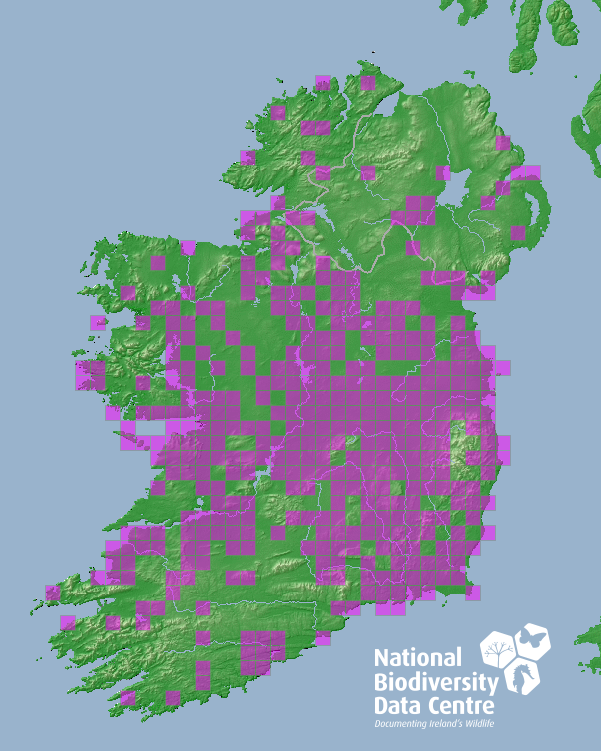 Native species, apart from much of Northern Ireland, where most populations are now thought to be introductions.

Primrose (Primula vulgaris) is a common and familiar close relative of Cowslip.

Primroses and Cowslips can hybridise if they grow close to one another, resulting in Primula x polyantha, sometimes called False Oxlip. They can be identified by the larger paler flowers, intermediate between the two parents, as in the photo above. (Note that Oxlip, Primula elatior, is not found in the wild in Ireland.)

In some parts of Ireland Cowslips are quite common, however in others they are rare and almost lost. In Northern Ireland they are so rare that they are a protected species. They are often planted along roadsides and in gardens, so are more likely to be native away from road verges.

Natural and semi natural grassy habitats on calcareous and base-rich soils are under threat of being lost due to land abandonment, changes of use, and agricultural improvement.

Irish Species Project: If you have seen Cowslip or any of the species in the Irish Species Project, please fill out a recording form. It can be downloaded here, and you can also download the guidance document for detailed instructions (both also available at http://www.bsbi.org.uk/ireland.html).

Spring flowering plants project: this project is a collaboration between the National Biodiversity Data Centre and the BSBI. It is hoped we can collect valuable data to improve our knowledge of the current distribution of some common plants. All data will be fully validated by both partners before loading to Biodiversity Maps and being made available to the BSBI.

Photos of Primula leaves from www.aphotoflora.com, with kind permission.