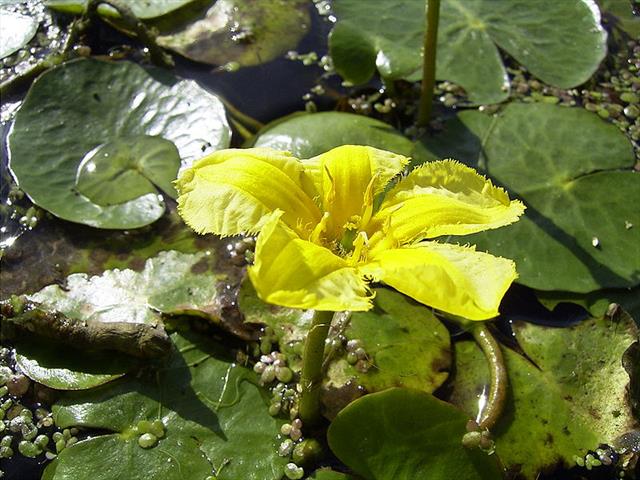 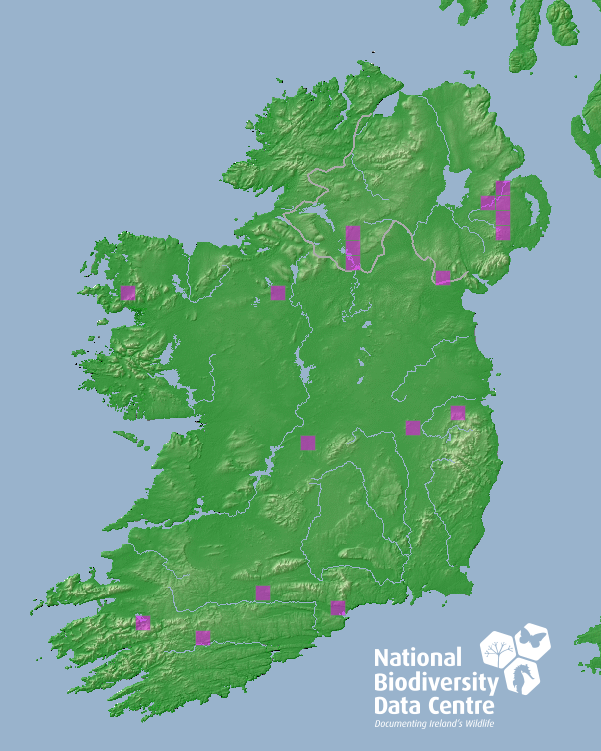 Overall risk of this species to Ireland is categorised as: MODERATE to MAJOR with a HIGH level of confidence.

Overall conclusion summary:  The impact of this species is limited to a very few sites in Ireland. Where it is present it is abundant, but the impacts have not been quantified. Its spread is slow, and the impacts on other components of the aquatic ecosystems are poorly understood. It is relatively easily controlled in small populations. Therefore, in a national context, it is considered to have a moderate to major risk to native biodiversity, native ecosystems and conservation goals as well as having the potential to cause negative socio-economic impacts in a wide-range of still or slow-flowing waters in Ireland.

Floating aquatic plant, rounded heart-shaped leaves 2 to 5 inches in diameter arranged alternatively on the vegetative stems and are opposite on the flowering stems. Stems up to 1.5m long. Flower has 5 petals that are yellow and with fringed margins.  The flowers are on long stalks rising a few inches above the water. May be confused with other lilies.

To date no impacts recorded in Ireland but that is likely due to its limited distribution and low abundance at sites (Millane & Caffrey, 2014). However much like other aquatic plants that form dense stands it is likely to exclude native plants when abundances are high.

Can reproduce vegetatively or by sexual reproduction, though in Sweden vegetative reproduction was found to be the main method of dispersal (Larson, 2007).

Widely sold as an ornamental plant and present in artificial watercourse, ponds and aquaria (Millane & Caffrey, 2014). Subsequently introduced into the wild, by escape during flooding or attached to waterfowl, or deliberately introduced. The potential exists for it to be further dispersed by human mediated mechanisms within Ireland.

Established - Localised. Locally established and growing abundantly in a number of artificial watercourses, in sheltered bays of lakes and some smaller lakes (Millane & Caffrey, 2014).

Report any sightings to the National Biodiversity Data Centre. Do not purchase this plant or grow in outdoor ponds. Dispose of garden waste responsibly and never dump aquatic plants in lakes.