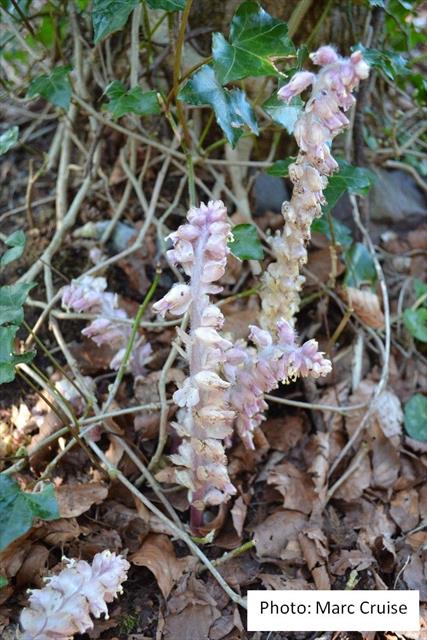 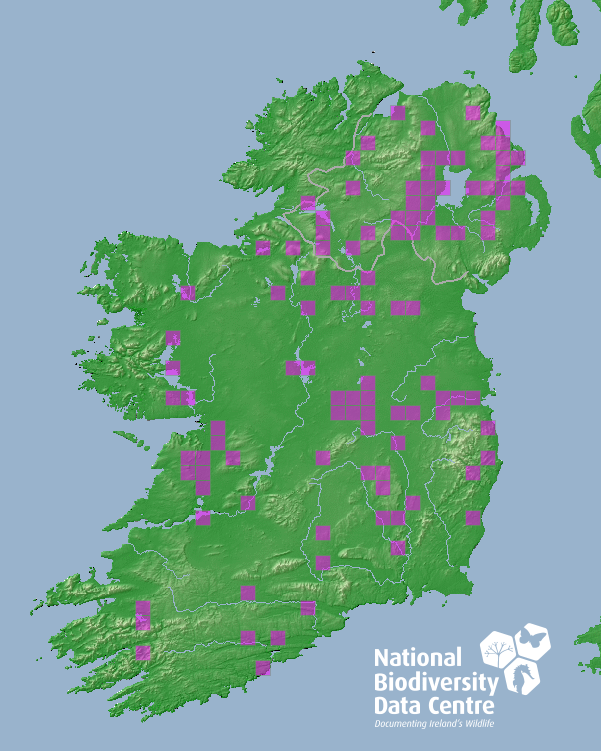 Toothwort’s closest relative Purple Toothwort (Lathraea clandestina) is not native in Ireland. Toothwort may be confused with Bird’s-nest Orchid (Neottia nidus-avis). Like Toothwort, Bird’s-nest Orchid grows in woodlands and flowers in early summer. It also lacks green pigmentation, but unlike Toothwort it is not a parasitic plant - instead it is a saprophytic plant (feeds on dead matter, e.g. decaying leaves on the woodland floor). Its flowers are light brown or golden in colour and have a different shape from the two lipped creamy pink flowers of Toothwort.

Toothwort grows in woodland habitats on moist rich soils. It is parasitic on the roots of Hazel and Sycamore, and apparently a range of other trees, and so will be found growing in close proximity to them.

The plants are pollinated by bumble bees and can produce copious seed. The seeds have elaiosomes, (fatty structures attached to the seeds) and are distributed by ants.

Many areas of woodland habitat in Ireland are under threat of changing management or abandonment, and tend to be quite small or fragmented. Plants are vulnerable to trampling by grazing animals, or may become crowded out by other plants, such as Brambles.

Toothwort may be found anywhere in Ireland but it is more common in the northern part of the country. It is an uncommon species, and may be considered an indicator of ancient woodland (Perrin and Daly 2010).

Irish Species Project: If you have seen Toothwort or any of the species in the Irish Species Project, please fill out a recording form. It can be downloaded here, and you can also download the guidance document for detailed instructions (both also available at http://www.bsbi.org.uk/ireland.html).

Spring flowering plants project: this project is a collaboration between the National Biodiversity Data Centre and the BSBI. It is hoped we can collect valuable data to improve our knowledge of the current distribution of some common plants. All data will be fully validated by both partners before loading to Biodiversity Maps and being made available to the BSBI.