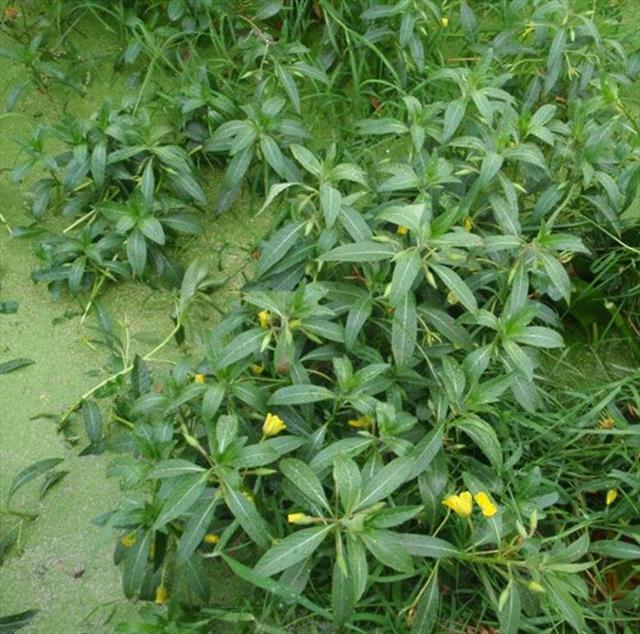 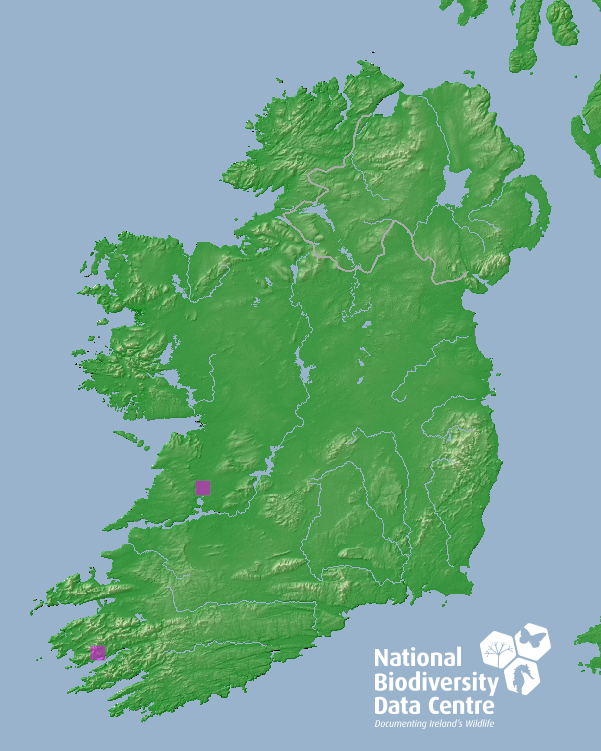 Overall conclusion summary:  The three Ludwigia spp. assessed appear to pose a major risk to native biodiversity, native ecosystems and conservation goals as well as having the potential to cause negative socio-economic impacts in slow-flowing or still waters due to their capacity to spread rapidly and establish dense infestations. The Irish climate appears to be very suitable for the establishment of L. peploides and L. hexapetala and it has already been demonstrated that it is suitable for the establishment of L. grandiflora.

"Herbaceous perennial and has two different growth forms: in one form glabrous or sparsely pubescent stems grow horizontally over the soil or water and produce roots at nodes and, often, white, spongy roots. These roots are feathery but stiff. Leaves are mostly glabrous, alternate, petiolate, but so congested at the tip to appear to be in rosettes. Leaf shape varies from suborbicular to obovate to spatulate with a round apex and base. Plants do not flower when only floating leaves are present. In the other growth form, plants elongate from the rosette stage (described above) and grow above the surface of the water. The stems are pubescent and erect, up to 1 m tall. The leaves are pubescent, variable in shape from lanceolate to elliptic and acute at both ends. Upper leaves may be subsessile or sessile, the lower leaves petiolate. Flowers are solitary from the upper leaf axils and on stalks 2 to 3 cm long. Sepals and petals are 5, sometimes 6, the petals bright yellow. The fruit is a pubescent capsule with many seeds." (USACE-ERDC 2009).

A strong negative relationship between Ludwigia grandiflora cover and invertebrate abundance & native plant abundance were measured in pond experiments in Belgium (Stiers et al., 2011). Can form dense mats covering over waterbodies with measured dry biomass(DM) of Ludwigia spp. varying from 200 g DM per metre squared in shallow lakes to 4,500 g DM per m squared in a meander of a eutrophicated river (Lambert et al., 2010). Has been shown to engage in allelopathic activity (releasing chemicals to affect other organisms) that influences the water quality throughout the year, giving it a competitive advantage over Lactuca sativa (Dandelot et al., 2008).

Sold as an ornamental plant for outdoor ponds. Initial records were from garden and ornamental ponds. From there it has the potential to spread to natural waterways, by natural means during flood events or through 'aquarium dumping' of material in the wild. (Millane & Caffrey, 2014)

Well established stands may be impossible to eradicate (Millane & Caffrey, 2014). The Department for the Environment, Food & Rural Affairs in the UK (Defra) (2007) advises eradication is only possible within the first year of establishment. Kelly and Maguire (2009) recommend a combination of chemical, environmental and mechanical methods.

Publicity campaigns, education of gardeners and water users, and promotion of responsible disposal of aquarium plants should help to prevent further introductions of Ludwigia grandiflora to Ireland.

Areas undergoing eradication should be fenced off and signed 'Uruguyan Hampshire-purslane eradication area. Please keep out.' Biosecurity is essential in preventing the spread of this invader (Renals, 2016).

Hand-pulling is an effective method for individual small areas of establishment (Q-bank, 2011).

For areas above the waterline and those in shallow water effective control can be achieved by excavating the top 30cm of topsoil (Q-bank, 2011).

Defra (2007) and Kelly & Maguire (2009) recommend the use of an adjuvant as Ludwigia spp. may be tolerant of low concentrations of glyphosate. Several applications each season are necessary to achieve control. The first application should occur before June or July (Q-bank, 2011).

Strategic planting of shrubs and trees may be useful to control individual stands but non-target species may also be affected.

Raising water levels can be very effective if the site allows (Q-bank, 2011).

Benthic barriers (jute matting) have been used to successfully control Lagarosiphon major in Lough Corrib (Caffrey, 2010). This method may also have an application in the control of Ludwigia spp.

Occasionally present- Rare/Localised. Detected at two sites in 2009, Inland Fisheries Ireland undertook action to remove the species from both sites and to monitor the sites.