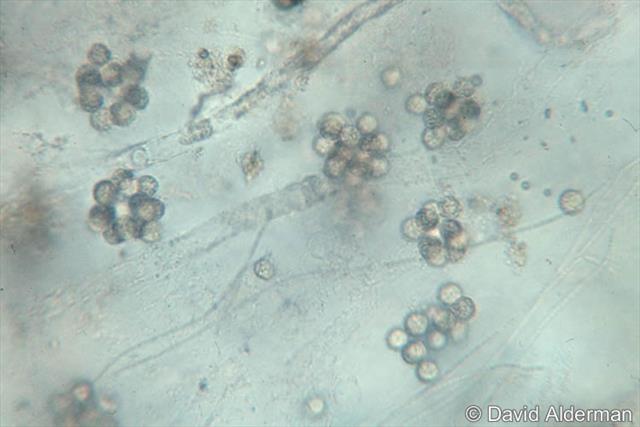 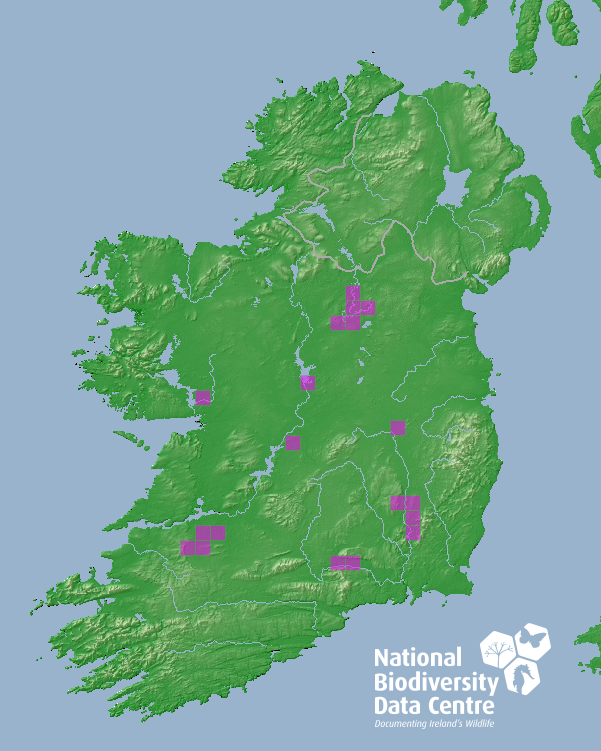 Presence of the disease is generally identified by the presence of black (melanised) spots on crayfish but microscopic (Cerenius et al., 1992) or increasingly DNA techniques are used to confirm identification (Schrimpf et al., 2013). Anphanomyces astaci is a pseudofungus consisting of vegetative hyphae 7-9µm in width.

Causes widespread mortality in native crayfish species and has resulted in virtual extermination of all 5 native crayfish species in Europe with only relict populations surviving (Alderman, 2009). Loss of crayfish from Irish lakes are likely to result in changes in the macroinvertebrate community and an increase in the growth of dominant aquatic macrophytes (plant species large enough to be seen with the naked eye) (Matthews & Reynolds, 1992), however these impacts are likely to be exacerbated by the presence of non-native freshwater species that were not present in Ireland in 1992.

Originally introduced into Europe with North American crayfish species (Orconectes limosus spiny cheek, Pacifastacus leniusculus signal & Procambarus clarkii red swamp) in the 19th century (Alderman, 2009). The likely source of the 2015 introduction is unknown but thought to be from contaminated wet equipment, incorrectly decontaminated after being used in affected waters in Britain or Europe or by the introduction of non-native crayfish species (DAHG, 2015).

All non-native North American freshwater crayfish can act as hosts for this disease (Alderman, 2009).

Crayfish plague was first diagnosed in Westmeath in Irish stocks of White-clawed crayfish from  a midlands limestone lake and crayfish farm in October, 1987  (Matthew & Reynolds, 1992).

If introduced on non-native crayfish the species can be considered established in Ireland but if introduced with contaminated equipment there is the potential for containment as spores only remain viable in water for approximately 6-9 days after death of an infected crayfish (Matthews & Reynolds, 1990).

Originally native to North America it has been introduced into Europe and Turkey (Alderman, 2009).

Report any sightings of dead or diseased crayfish to the National Biodiversity Data Centre or Inland Fisheries Ireland. Practice good biosecurity by disinfecting and thoroughly drying any boating, fishing, angling or other equipment that has been used in British or continental European waters.

Department of Arts, Heritage and the Gaeltacht (2015). Investigation underway into cause of Crayfish Plague on River Bruskey, near Ballinagh, Co Cavan. Press release prepared by Inland Fisheries Ireland, NPWS & NBDC.

Detailed description of biology, reproduction and culture of A. astaci in Alderman & Polglase (1986).