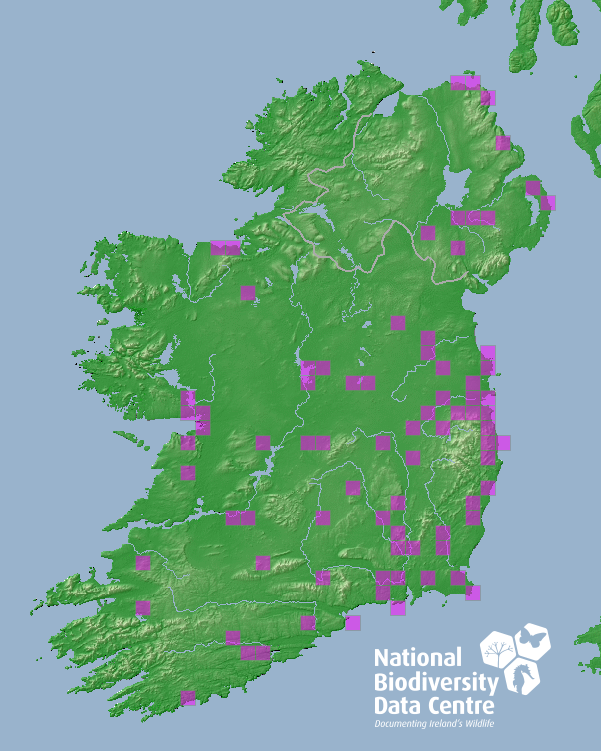 Generally found in many, usually open, habitats, which in Ireland are rather widespread. They also happen to be most common species of wasp associated with urban habitats. Very rarely found in forested areas and above 800 m a.s.l.

Nest sites are mostly subterranean with entrance tunnels some 3-20cm in length. Open sites are preferred, often in heathland or grassland. Aerial sites are used less commonly than V. vulgaris. In the soil, nests may reach 25cm in diameter. Nest paper is grey, due to workers collecting well-weathered wood fibres.

Adult wasps leaving and entering a colony often carry materials which have a nutritional or nest-building function, and sometimes a sanitation or nest-cooling function. The main materials brought into a colony are fluids, including water in the crop, and pulp and flesh carried in the mandibles.

The pulp is used as a building material for the envelopes and combs of the nest. Unlike V. vulgaris,  which uses rotten wood, V. germanica will use dead sound wood.

The fluids, with their dissolved carbohydrates, and the flesh are used to maintain the metabolic activities of the larvae and adults, for the growth and development of the larvae, for egg maturation in the queen and to build up reserves in the newly reared sexuals. Water is used in the nest building process and as an aid to reducing colony temperature when it becomes too hot. In general, water is obtained from open sources such as ponds and streams, fluids from the nectaries of flowers, extra-floral nectaries (e.g. laurel), honeydew, ripe fruit, sap flows and mad-made sweet substances.

Prey and flesh food are usually derived from live insects and other arthropods, particularly spiders, but are also scavenged from dead arthropods and vertebrates including man-derived sources. For example prey items usually consist of flies, lepidopteran larvae, spiders etc.

Generally from mid-March to early November (essentially once the warmth of Spring arrives until the colony terminates due to the cold weather that winter brings at the end of the year).

The life cycle of social wasps including that of V. germanica can be divided into four phases, namely the foundation, worker, reproductive, and intermediate phases.

Overwintering queens emerge from mid-March with nest foundation by the single queen from early May. The first workers emerge from early June which signals the start of the worker phase. Further workers are then produced in time before the reproductives (new queens called gynes and males called drones) leave for their mating flights from early September i.e. the intermediate phase. The colony terminates usually in early November and rarely mid-December with the death or inactivity of the queen.

In spring, queens visit cotoneaster and other early flowering shrubs for nectar. Males and the last workers are often found taking nectar from ivy flowers and the last remaining umbellifer flowers in October and November.