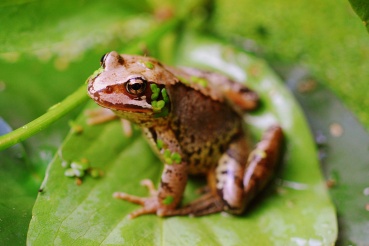 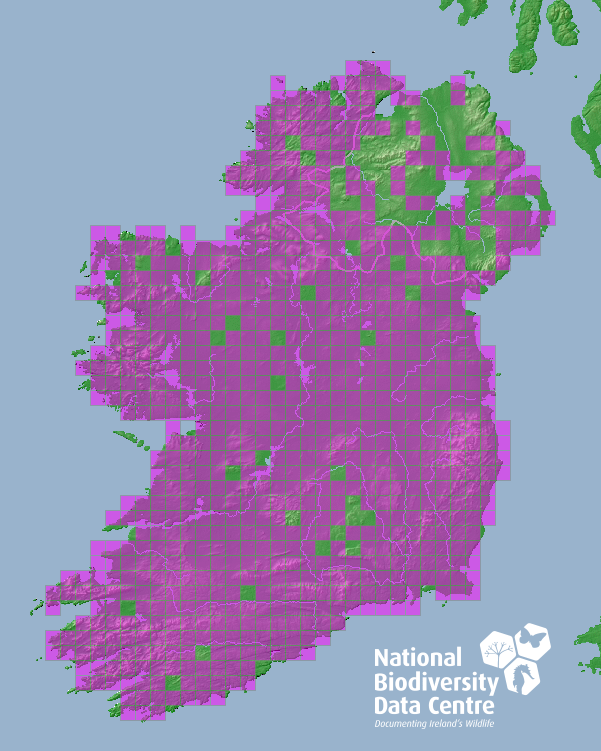 Over most of the country this is unmistakable as it is the only native species of frog that occurs in Ireland.

Could be confused with the Natterjack Toad in the Dingle and Iveragh peninsulas, but the latter species has a yellow band running down the middle of the back and has a general ‘warty’ appearance.

The spawn of frogs is laid in clumps whereas that of the Natterjack Toad is laid in strips.

Uses a broad habitat range and has a relatively broad diet.

Spawning can occur from early spring.

Tadpoles hatch within two weeks and mature over a period of two to three months, metamorphosing to froglets in early Summer.

It may take two to three years to reach sexual maturity.

The 2011 Irish Red List of Amphibians,Reptiles and Freshwater Fish notes that while Chyrtid fungal disease (Batrachochytrium dendrobatidis) and Ranavirus have been an issue for populations of Common Frog in Britain as yet neither disease has been identified in populations in Ireland

In the Article 17 Habitats Directive reporting for the period 2007-2012 no Conservation Actions implemented or being implemented during the period are listed.

The 2009 IUCN European regional Red List assessment for this species notes the localised threats of:

Widespread and abundant. From Norway and Sweden, Britain and Ireland through the Balkans to Kazakhstan, to Greece and to Spain although absent from areas of Italy and Iberia.

Widespread and common, recorded from every county from sea-level to upland areas.

The National Biodiversity Data Centre is trying to improve our knowledge on the distribution of the Common Frog in Ireland. Should you observe this species, please submit sighting to add to the database. Detailed observations will assist us gaining a better insight into where the Common Frog is most abundant in Ireland and we might also be able to detect regional variations. Please submit any sightings and photographs at:

Marnell, F. 1999. The distribution of the common frog Rana temporaria L. in Ireland. Bulletin of the Irish Biogeographical Society 23: 60 – 70.