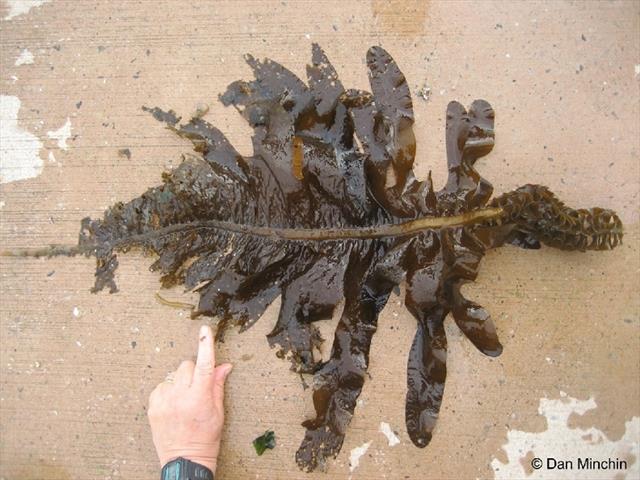 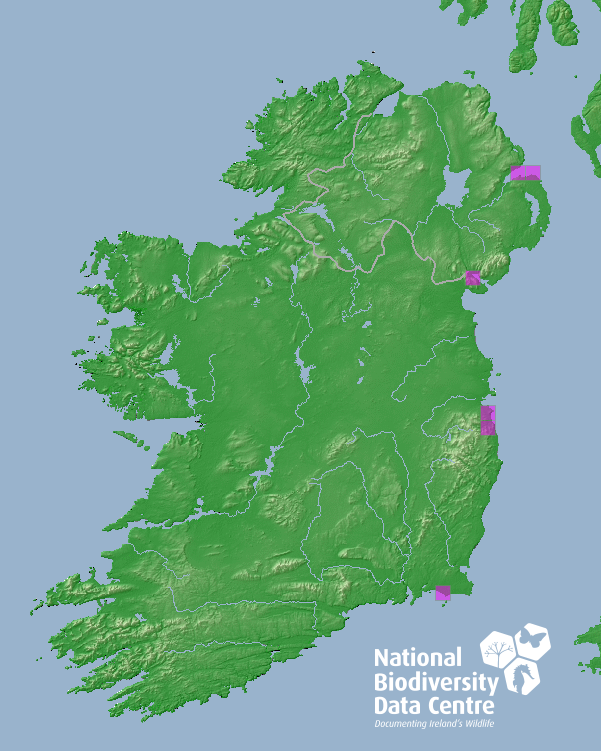 The sporophyte is the stage that can be readily identified is a large golden brown seaweed 1-3m in length, with a broad, 'strap like' midrib (1-3cm wide) running the length of the thallus (Verlaque, 2007).

On man-made structures in Torquay Marina U. pinnatifida was found to decrease the numbers of Laminaria digitata, L. saccharina (two native sea weeds) and the tunicate Styela clava (an invasive tunicate) (Farrell & Fletcher, 2006), and has been shown to impact on native seaweeds in Argentina (Casas et al., 2004). These impacts are likely to be more severe in natural habitats (Casas et al., 2004; Farrell & Fletcher, 2006; Minchin & Nunn, 2014) but U. pinnatifida appears to be slower to invade these areas than man made structures (Farrell & Fletcher, 2006). However, as man made structures are an increasingly important proportion of coastal environments this species may still pose a significant threat to native biodiversity and is likely to spread extensively in Irish waters (Minchin & Nunn, 2014).

Undaria pinnatifida has a heteromorphic, diplohaplontic annual life cycle, with a diploid macroscopic sporophyte (kelp body) and a haploid microscopic gametophyte (Verlaque, 2007). Spores are released into the water and are viable for 5-14 days, though generally seem to settle within 10m of the parent plant (Forrest et al., 2000) and after settlement gametes are released.

There is a degree of conflicting information regarding the sea temperatures required for reproduction. Spore release is thought to begin when the water temperature exceeds 14 °C (Saito, 1975 in Farrell & Fletcher, 2006), however studies from the United States have found that recruitment is highest after periods of cold water (defined there as <15°C) and lower at higher temperatures (Thornber et al., 2004), suggesting there may be a narrow band of temperatures at which the species is capable of full reproductive output (~13°C) (Thornber et al., 2004). However it is thought to grow best in Europe at temperatures of below 12°C (Verlaque, 2007).

As it was initially found in Belfast Lough and Carlingford Lough the most likely source of introduction is as a fouling organism on boats, as it is unlikely the species can survive transport in ship ballast water (Minchin & Nunn, 2014).

Long and medium range dispersal in Irish waters is likely to be predominately by leisure craft and movement of contaminated gear (Minchin & Nunn, 2014) and may occur at a rapid pace, e.g. in Argentina after being present in the country for approximately 15 years it was found to be spreading at a rate of 50km/year (Dellatorre et al., 2014).

Short range dispersal by natural means may show a lag phase between inoculation of an area and the spread of Undaria pinnatifida, as it took 7 years for it to spread from the marina to a nearby sea wall at Torquay marina (Farrell & Fletcher, 2006) though spread in New Zealand is thought to be at a rate of 100m/year (Forrest et al., 2000).

Competition, Bio-fouling, Interaction with other invasive species, Other

Sublittoral rock and other hard substrates (EUNIS code A3).

Established - Localised. Originally found in Belfast Lough in 2012, it has been reported from Carlingford Lough in 2014 & is likely to spread further.

Farrell, P., & Fletcher, R. L. (2006). An investigation of dispersal of the introduced brown alga Undaria pinnatifida (Harvey) Suringar and its competition with some species on the man-made structures of Torquay Marina (Devon, UK). Journal of Experimental Marine Biology and Ecology, 334(2), 236-243.