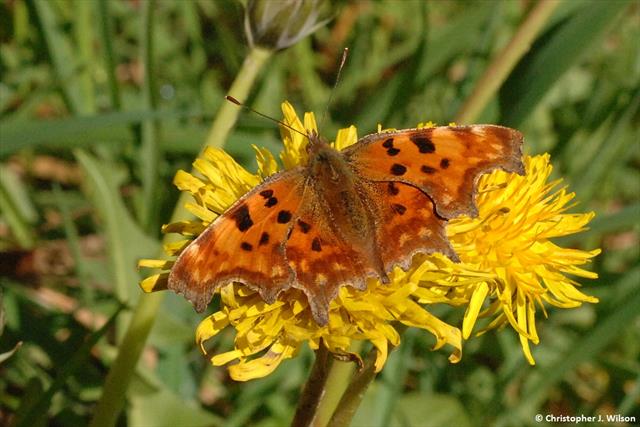 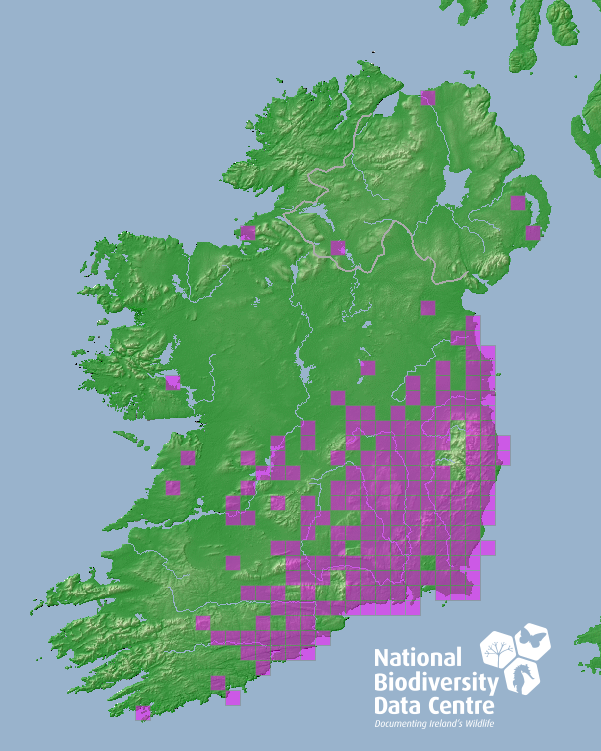 The Comma is not afforded legal protection in Ireland.

Generalist, found in: tall-herb and grassy forest clearings, crops, field margins, orchards, urban parks and ornamental gardens. The first confirmed report of the Comma in the Republic of Ireland was in 2000 in Co. Wexford (O'Donnell & Wilson, 2009).  It is now consistently recorded each year throughout the south and east, and in 2014 it was confirmed to be overwintering in Co. Carlow (Harding & Power, in press). In Spring, overwintering adults emerge in wooded habitats and spend time basking, favourite surfaces being tree trunks, wood piles, dead bracken and fence posts.  Males establish territories on sunny rides and woodland margins, perching waiting for females to enter the territory and conducting short flights to and from their original perch.  During late summer and early autumn, the 2nd generation adults range widely over sites with nectar sources, but move to woodland to hibernate (Bond & Gittings, 2008).

Bivoltine: in 1st generation is in flight from April to May, and the 2nd generation from July to August. Adults of this species can be observed throughout the year as migrants continue to arrive from Britain and continental Europe.

Eggs are laid singly, near the tip of the upper surface of a leaf growing at or close to the top of the foodplant. The larva feeds in May and early June, and again in late July and early August, at first on the lower surface of a leaf, but later switches to the upper surface. It pupates in May, and again in July, suspended from a dense silk pad on the foodplant, but more often in surrounding dense vegetation. Overwintering as a hibernating adult on tree-trunks and branches, where the ragged wing outline provides good concealment (Bond & Gittings, 2008; Harding & Power, in press).

Harding, J. and Power, B. In press. Addition of the Comma butterfly as a breeding Irish species. Irish Naturalists' Journal.