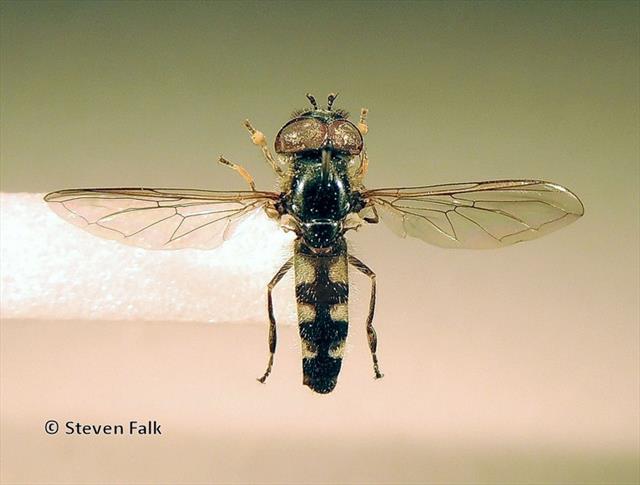 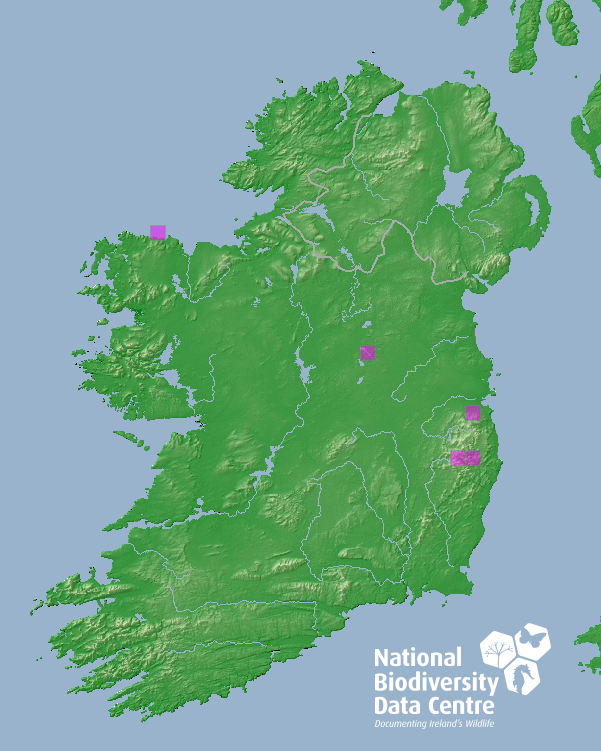 Forest; deciduous forest and scrub; scrub-invaded grassland. This enigmatic species is in Ireland associated with open areas in humid deciduous woodland and Prunus spinosa scrub, but the few records allow little more than that to be said. However, despite its apparent association with P. spinosa scrub, it does not seem to occur in hedgerows and there are no records of this insect from the standard Irish farmland landscape of green fields plus hedges. Its early flight period almost inevitably leads to under-recording - a phenomenon not confined to Ireland. It can occur in great numbers at the tree line in the Alps (L.Verlinden, pers.comm.), but elsewhere is rarely encountered.

Occurs in the immediate vicinity of scrub, where it flies at 2m upwards among the branches of shrubs such as runus spinosa, descending to rest on low-growing plants, e.g. tussocks of dead Molinia; visits flowers of taller shrubs and small trees.

Violovitsh (1986), plus Nielsen (1972, 1981) and Vockeroth (1992); Haarto and Kerppola (2007a), Bartsch et al (2009a). Violovitsh's indication that the dorsum of the male mesoscutum is entirely pale haired in P. discimanus is erroneous. Black hairs may also be present across the middle. This insect is extremely similar to the northern European P. groenlandicus (Curran). It may be distinguished from these two species in the male sex by the fact that the two basal segments of the mid tarsi are yellow in P. discimanus, while they are entirely black in males of the other species. The recently-described Georgian species, P. migriaulii, Stuke and Nielsen, also belongs in this group. Stuke and Nielsen (2002) provide a key for distinguishing that species from P. discimanus. The adult of P. discimanus is illustrated in colour by Stubbs and Falk (1983), Torp (1994) and Bartsch et al (2009a).

From southern Norway south to Belgium and France (Alps); from Ireland eastwards through central Europe into Russia and on through Siberia to the Pacific coast (Sakhalin); also in Afghanistan, Mongolia and China; in N America known from central Canada and Pennsylvania. The range of this species in Europe extends from the southern edge of Scandinavia south to the Alps, but it is nowhere recorded frequently. It ranges far beyond Europe, through Asiatic parts of the Palaearctic and in the Nearctic.

Added to the Irish list by Speight et al (1975). The few Irish records of this species suggest it should be included in any listing of insects requiring protection in Ireland, but until there is better knowledge of its habitat requirements and biology, such a listing would be largely an empty gesture towards its conservation.