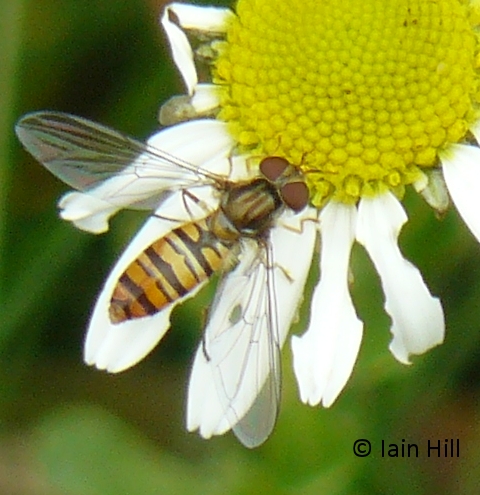 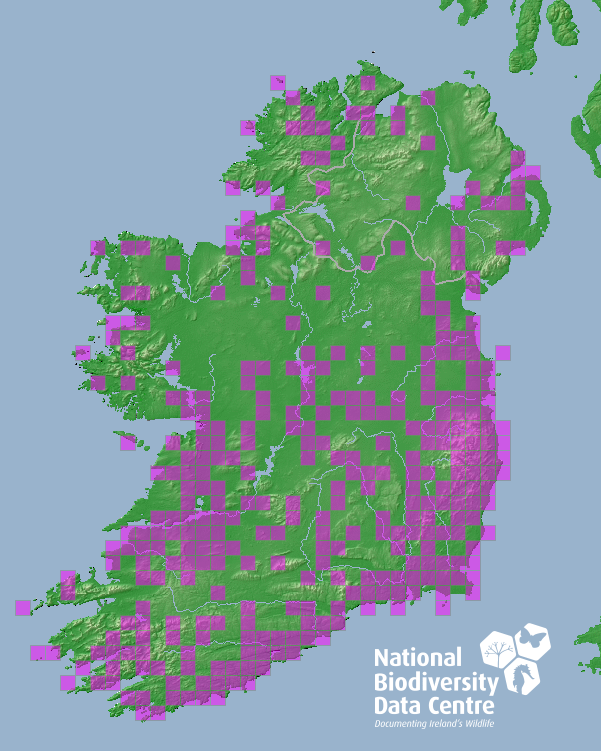 There are many other black and yellow striped hoverflies in Ireland, but none with this particular banding pattern on the abdomen. With a little experience it becomes very distinctive.

Highly anthropophilic and almost ubiquitous. This remarkable species is found as frequently in ecosystem conditions highly modified by human activities as elsewhere. It has a short generation time and can build up large populations by completing at least one generation in crops, like cereals, before they get harvested. It can also take advantage of setaside land. These attributes have led to its recognition as a useful supplementary biological control agent of greenfly in various crop situations. It definitely overwinters in Ireland as an adult, as in other parts of its range, and is one of the earliest species seen on the wing - typically in February. The extent to which populations of this insect in Ireland are maintained via the overwintering adults is uncertain, because they can be augmented by migrant swarms which arrive over the sea, and not necessarily across the narrowest piece of water (Speight, 1996a). However, there is no evidence for arrival of these migrants before July/August, and E. balteatus is normally both frequent and generally distributed in Ireland by that time of the year. Recently, evidence has accumulated to suggest E. balteatus may also be capable of overwintering as a larva, though the extent to which populations can be maintained in this way in Atlantic parts of Europe is unclear.

Usually flies within 2m of the ground; active under cloudy conditions as much as in the sun; highly migratory; males hover up to 4 - 5 m, usually over paths in woodland, or similar situations.

February/ November, with a number of overlapping generations; overwinters as an adult and may be found hibernating among ivy, or in caves etc. On exceptionally mild, sunny days in mid-winter this species can sometimes be found in flight - presumably specimens that have been hibernating. Sarthou et al (2006) show that the occurrence of E. balteatus adults under these conditions is linked to availability of shelter and potential resting/hibernation sites (in forest), in an agricultural landscape. This species is a pronounced migrant. Larva: the larva has been described and figured by various authors, notably by Bhatia (1939). It is incorporated into the keys provided by Rotheray (1994), who also figures the larva in colour. The morphology of the chorion of the egg is figured by Kuznetzov (1988). Egg morphology is described by Chandler (1968), oviposition behaviour by Bargen et al (1998) and Scholz and Poehling (2000) and various aspects of egg development are detailed by Branquart and Hemptinne (2000), who establish that a female of this species can lay between 2000 and 4,500 eggs during its adult life. The larva is aphidophagous on a wide range of low-growing plants including various crops (e.g. Beta, Lactuca, Solanum, Trifolium spp., Triticum), shrubs (e.g. Buddleja, Euonymus, Sambucus) and trees; Kula (1982) records that E. balteatus shows a preference for aphid colonies low down among the foliage, when its larvae are found on spruce (Picea). Dusek and Laska (1974) and Bargen et al (1998) describe elements of larval biology and Bombosch (1957) and Tanke (1976) give accounts of laboratory culture of the species. Branquart (1999) shows that development time (from egg-laying to eclosion of adult) in this species can be as little as 3 weeks. An extensive literature has grown up around this species, because it may be readily cultured under laboratory conditions. It has to be recognised that, although larvae of this species may occur abundantly in crops their presence does not necessarily lead to abundant adults - pesticides used to control aphids can lead to 100% mortality of E. balteatus larvae. There can also be sublethal effects of pesticides on the insects, for instance reduction of fecundity, in females that have developed in treated crops (see, for instance, Colignon et al, 2003). Barkemeyer (1994) provides an extensive and comprehensive review of the literature concerning this species and its biology. While it has been long recognised that this species can overwinter as an adult, only recently has it been established thsat it can also overwinter as a larva (Sarthou et al, 2006).

Visits a wide range of white and yellow flowers, from trees to low-growing plants and including nectarless flowers; also visits pink flowers such as Cirsium and Succisa (see de Buck, 1990, for an extended list of plants visited by this species). In October/November the species uses flowers of plants such as Arbutus unedo, Hedera and Viburnum tinus. Aspects of the use of flowers by E. balteatus are discussed by various authors, e.g. Sutherland et al (1999).

Fennoscandia to the Mediterranean; Canary Isles, Azores and N Africa; Ireland through Eurasia to the Pacific coast; south through the Oriental region to Sri Lanka; Australia. This is an extremely migratory species and records from offshore islands of northern Europe, such as the Faroes (Jensen, 2001) are assumed to be due to annual immigration, rather than indicative of the occurrence of resident populations.  Although known throughout the Palaearctic Region (except in the extreme north) and in both the Oriental and Australasian Regions, this species does not seem to have been found in the Nearctic.

Recorded as occurring in Ireland in Coe (1953). Common and widespread in Ireland, as elsewhere in most of Europe.