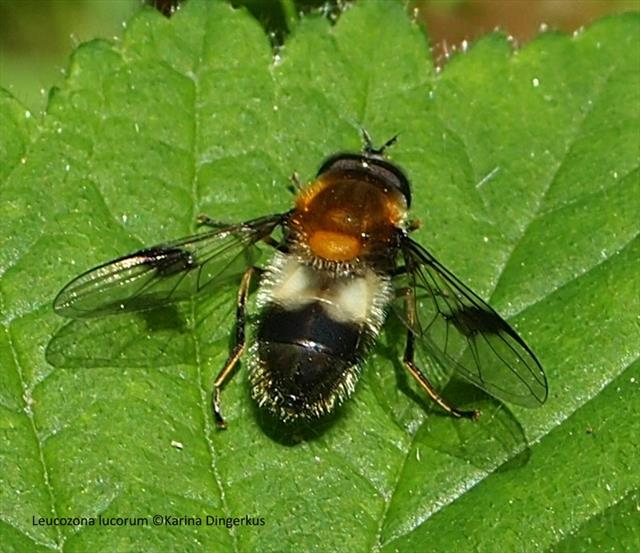 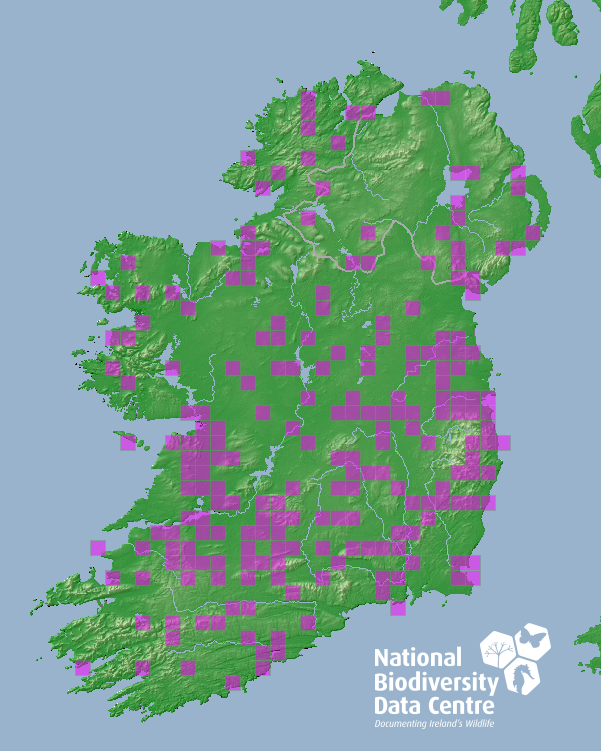 Deciduous forest, including scrub woodland and hedgerows, normally in relatively humid regions and up to the upper altitudinal limit of Fagus; unimproved montane grassland. In Ireland, this is characteristically a species of hedgerows and tracksides and open areas within oak woodland and hazel scrub. It is not a garden hoverfly and can only be expected in conifer plantations where there is a fringe of deciduous shrubs etc along tracks. Similarly, it does not occur in wetlands, dune systems or improved grassland. It has an unusually long flight period here, with females occurring throughout the summer to as late as September. This hoverfly is to a significant extent an anthropophilic species in Ireland at present. But its situation could deteriorate markedly, if intensification of use of farmland were to cause loss of hedges and unused field margins on a significant scale. One unusual feature exhibited by L. lucorum in Ireland is a partial second generation in August/September, particularly in the south-east of the island. This syrphid seems to be strictly univoltine elsewhere in Europe.

May/July and on into August in western Europe (stragglers in September). Egg: Chandler (1968). Larva: described and figured by Dusek & Laska (1967) and figured in colour by Rotheray (1994); aphidophagous.

Doczkal (1998a, 2000b). The male terminalia are figured by Dusek and Laska (1967), Hippa (1968b), Vockeroth (1969) and Doczkal (1998a). The adult insect is illustrated in colour by Colyer and Hammond (1951), Kormann (1988), Stubbs and Falk (1983), Torp (1984, 1994) van der Goot (1986) and Bartsch et al (2009a). Doczkal (2000b) demonstrates that three closely similar species have been confused under the name lucorum. One of these, L. nigripila (Mik), is currently known only from the Caucasus, but the other two species, L. inopinata and L. lucorum, appear to be widely distributed in Europe and, at least in central Europe, may be found in flight together. A simple, but not entirely reliable, method for distinguishing L. lucorum from L. inopinata is that in both sexes the hairs on abdominal tergite 4 are predominantly white in L. lucorum, whereas they are all black in L. inopinata. This feature is used by van Veen (2004), in separation of L. inopinata and L. lucorum.

From Fennoscandia south to the Pyrenees and northern Spain; from Ireland eastwards through Eurasia to the Pacific coast (Sakhalin and Kuril Islands); Japan; in N. America, from Alaska south to Oregon and New York. It is also frequent over most of western and central Europe, from northern Norway southwards to central France. But further south it becomes increasingly confined to mountain ranges and is not known from the Mediterranean zone.

Recorded as occurring in Ireland in Coe (1953). This Holarctic species is frequent and generally distributed in Ireland. The closely related L. inopinata does not seem to occur in Ireland.