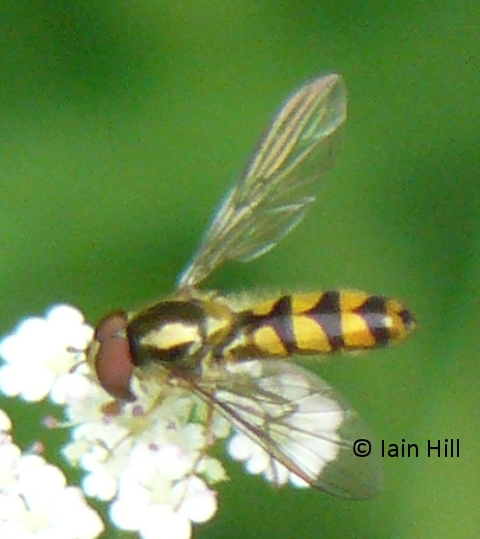 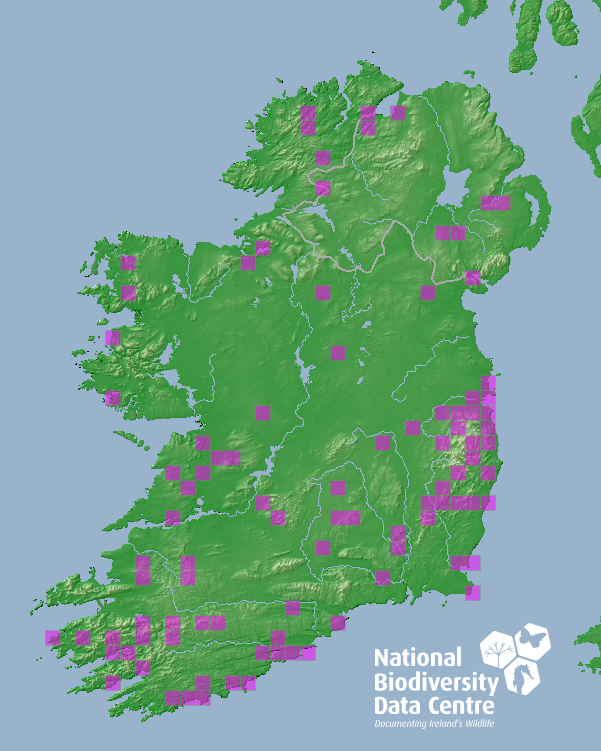 Many types of forest (both deciduous, broad-leaved evergreen and coniferous) and conifer plantations. Occurs in association with both oak forest and Betula/Salix scrub in Ireland, but is by no means characteristic of either. The wide range of situations in which its larvae can occur (tree foliage, shrubs and tall herbs) and the fact that it can use both aphids and psyllids as larval food, provide this syrphid with potential to exploit a variety of habitats. M. auricollis is to a significant extent an anthropophilic species here, found more frequently in suburban gardens and conifer plantations, than in more natural situations. However, in Ireland M. auricollis is not characteristically a constituent of farmland hedge faunas.

van der Goot (1981). The male terminalia are figured by Dusek and Laska (1967) and Hippa (1968b) (as Episyrphus). The adult insect is illustrated in colour by Stubbs and Falk (1983), whose figures show the range of variation exhibited by the abdominal markings in this species. Other coloured figures of the adult insect appear in Torp (1984, 1994) and van der Goot (1986).

Fennoscandia and the Faroes (Jensen, 2001) south to Iberia, the Mediterranean (including Cyprus, Malta and Crete), Canary Isles, N Africa, Turkey and Israel; Ireland eastwards through most of Europe into European parts of Russia. Considering this species' capacity for long distance movement together with the reality that it has probably been on the edge of its climatic range here - it reached northwards in western Europe only to the southern tip of Norway as recently as 10 years ago (Nielsen, 1999) - suggests that the existing Irish distribution pattern may in part be a consequence of recent changes in climatic conditions. In the previous version of these species accounts (Speight, 2000) it was suggested that M. auricollis would be an appropriate candidate for monitoring, in any attempt to use insects in climatic warming studies in Ireland, since it would be expected that this species would establish more permanent populations over much of the island as climatic amelioration occurred, leading rapidly to it becoming generally distributed here, due to the general availability of appropriate habitat.

Recorded as occurring in Ireland in Coe (1953). Until recently, the available distribution records for this syrphid in Ireland were scattered round the periphery of the island, few records originating further than 20km from the coast. It is well-established that the adults of M. auricollis undertake long distance movements, though not on the scale of the classic "migrators" among European syrphids, like Episyrphus balteatus, and it would be typical for such movements to occur along the coast. There is no reason to suppose that such movements would be confined to immigrant specimens arriving in Ireland from elsewhere. They could equally easily be undertaken by elements of the resident Irish population of the species. Latterly, M. auricollis has been recorded from conifer plantations in much of the southern half of the island and it can only be concluded that it is now established in these plantations and expanding its range through them quite rapidly.