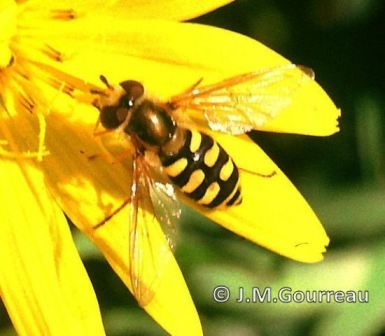 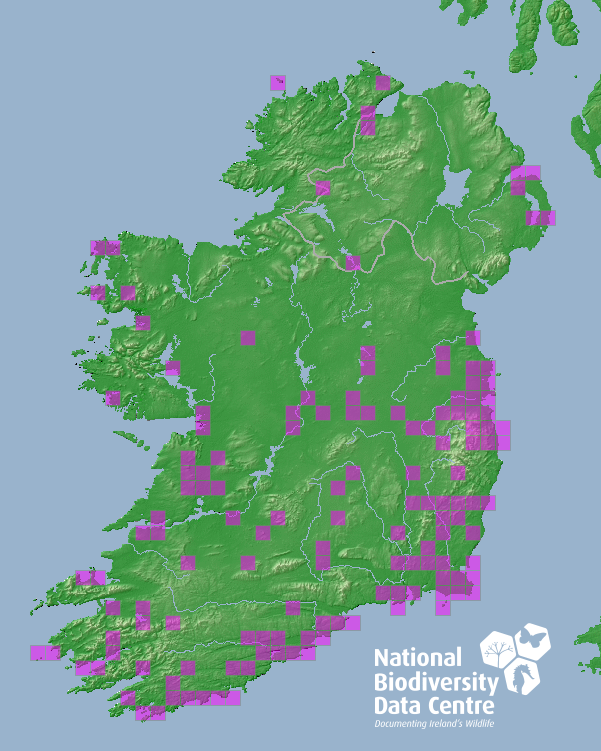 Open ground; grassland, dune systems, dry river beds, garrigue, largely anthropophilic, occurring in most sorts of farmland (including arable crops), suburban gardens, orchards and parks; occurs (at least as an adult) up to altitudes of alpine grassland in the Alps. This is an open-ground species, well-known for exhibiting long range dispersal by the adults. Although it may be found in the summer in various different open country habitats in Ireland and almost anywhere in the island, the early spring generation of adults is much more localised, hardly occurring away from low altitude situations near the coast. These early specimens are found in such places as suburban gardens. Doubtless, the Irish populations of E. corollae are augmented in many years by migrants that reach the island by flying over the sea. Evidence for occurrence of such migrations is fragmentary but, for instance, it is not a rare event to find a few specimens flying round the deck of cross-channel car ferries in summer, staying with the boat for much (if not all) of the crossing - but there is no evidence that such migrants are responsible for the early spring records of this species in Ireland. Neither is there any evidence that the larvae of E. corollae can go into suspended animation during the winter. How, or if, E. corollae manages to survive the winter in Ireland as a puparium is not a question open to easy investigation, but does represent an intriguing enigma. Further south in Europe, where it is clear E. corollae does overwinter successfully, the species is almost continuously brooded, adults appearing on winter-flowering shrubs like Viburnum timus on suitable days even in January. In much of central/southern Europe, E. corollae is an intensely anthropophilic species, building up immense populations in farmland, particularly on leguminous crops and weeds. These numerous populations are not seen in Ireland, presumably because the farming system would be less likely to engender them. But the species is markedly anthropophilic here as well, occurring as frequently in extensively man-modified, open-ground habitats as elsewhere, including the standard farmed landscape of green fields and hedges.

May/September, and may persist into November in some years (all the year round in southern Europe). Larva: described by Dusek & Laska (1961); biology detailed by Marcos-Garcia (1981); aphid feeding on various low-growing plants, particularly Leguminosae and including various crop plants (e.g. Avena, Beta, Cucurbita, Lactuca, Triticum, Zea). Chambers and Sunderland (1983) record larval densities of up to 46 per m² in crops of winter wheat (Triticum). Laboratory culture of this species is described by Bombosch (1957). According to Dusek and Laska (1961), this species overwinters as a puparium, which is most unusual for an aphidiphagous syrphid. Development (from egg-laying to larval maturity) can apparently take as little as 11 days (Chambers,1991). Egg: Chandler (1968). The morphology of the chorion of the egg is figured by Kuznetzov (1988). A comprehensive review of the biology of this species is provided by Barkemeyer (1994).
Range and status: from I

From Iceland, Fennoscandia and the Faroes (Jensen, 2001) south to Iberia, the Mediterranean, Madeira, the Canary Isles and N Africa; coastal States of Africa down to and including S Africa; Mauritius; from Ireland eastwards through most of Europe into European parts of Russia; through Siberia from the Urals to the Pacific coast; Japan; China; Formosa. This is a highly migratory species, frequently observed using the coastal land/water interface as a migration route. Records from northern European offshore islands such as the Faroes (Jensen, 2001) are almost certainly derived from annual immigration, rather than a resident population.