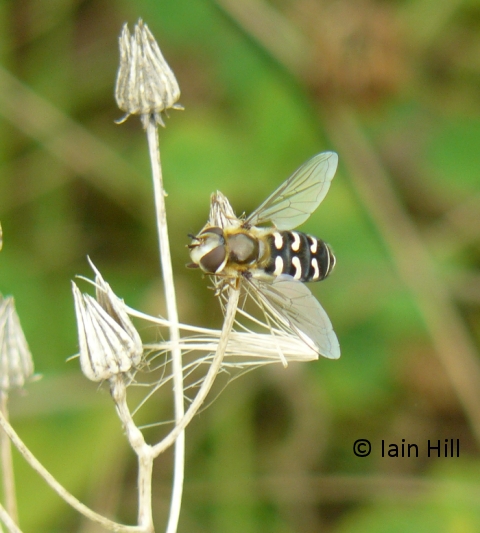 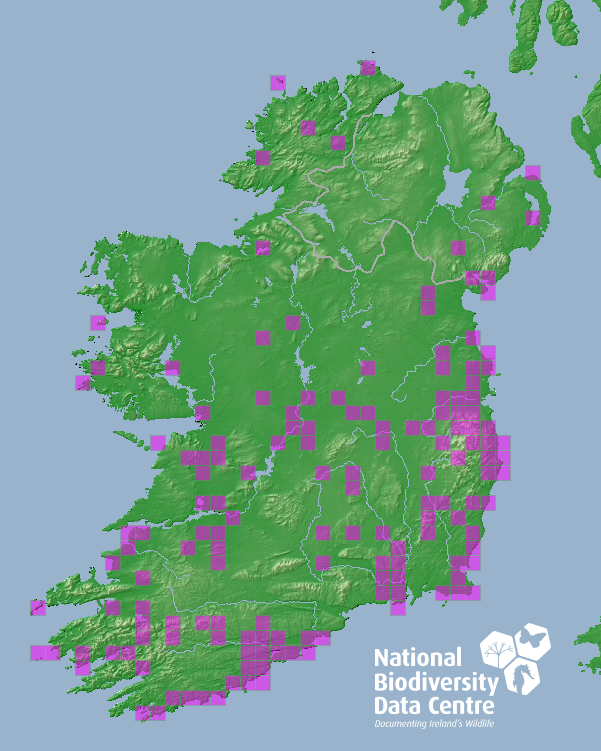 It is not possible to define preferences for this highly mobile species, which seems to exploit concentrations of aphids wherever it finds them. It is to a significant extent anthropophilic, occurring in arable crops, hedgerows, orchards, gardens and conifer plantations. It is uncertain whether or not this insect survives throughout the year in Ireland. Speight (1985a) argues that its occurrence here is probably as a migrant only, and there are still no data to suggest otherwise. If this interpretation is correct, the ecological requirements of S. pyrastri in Ireland are limited tothe habitats it can use during the period mid-June to October. That would include various crops, orchards, suburban parks and gardens, as well as the general farmland landscape of green fields and hedges - S. pyrastri is a markedly anthropophilic hoverfly and its generation time can be as little as six weeks. It is unclear why this insect may not survive the year round in Ireland, but climatic factors must be suspected as limiting. In this regard it is perhaps apposite that, like another syrphid extremely frequent and widespread in continental Europe but also seemingly unable to maintain populations throughout the year in Ireland (Sphaerophoria scripta) S. pyrastri is unusual in that it is known to overwinter as a puparium (Kantyerina (1979). Although it is a strongly migrant insect, the only records of S. pyrastri in Norway are from the southernmost part of the country (Nielsen, 1999), while the same author shows that the closely related (and resident in Ireland) S. selenitica occurs as far north as Lappland.

Clearings, tracksides, hedgerows, gardens etc. etc.; fast flying, usually within 3m of the ground; frequently encountered flying round bushes and shrubs, in a slow and purposeful manner, only to speed away after 30 seconds or so.

February/November in most of continental Europe. Females are known to overwinter in central Europe, but there is little evidence for this in Atlantic parts of Western Europe, where the annual occurrence of S. pyrastri may well be totally dependent upon annual immigration from elsewhere and records of the adult insect are almost entirely confined to the period June/September. Larva: described and figured by various authors, e.g. Bhatia (1939), who also describes the egg. Diagnostic features of the last instar larva and puparium are given by Laska et al (2006), who also provide a key separating both larvae and puparia of this species from those of the other Scaeva species known from Europe. The larva is aphid feeding on a wide range of aphids on low-growing plants, bushes and shrubs, including many crops. Rojo and Marcos-Garcia (1998) list herbaceous plant genera on which larvae of this species have been found in Portugal and/or Spain. Rotheray (1994) illustrates the larva in colour. Overwintering in this species apparently occurs as a puparium (Kantyerina, 1979) in the grass-root zone or on trees. Barkemeyer (1994) provides a comprehensive literature review of what is known of the biology of this species. The morphology of the chorion of the egg is figured by Kuznetzov (1988).

Fennoscandia south to Iberia, the Mediterranean, Canary Isles and N Africa; from Ireland east through much of Europe and Asia Minor into European Russia; through Siberia from the Urals to the Pacific coast (Kuril Isles); India; China; N America from Alaska to California and New Mexico. This is an extremely migratory species, and occasional records from offshore islands of northern Europe, such as the Faroes (Jensen, 2001) are almost certainly derived from seasonal immigration, rather than a resident population.  S.pyrastri ranges widely through the Palaearctic and Nearctic regions and beyond and is abundant in southern Europe.

Recorded as occurring in Ireland in Coe (1953). Recorded from most parts of the island, and in some years not infrequent during late summer.