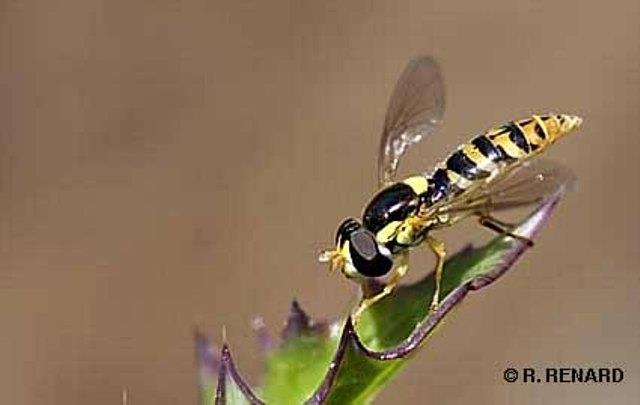 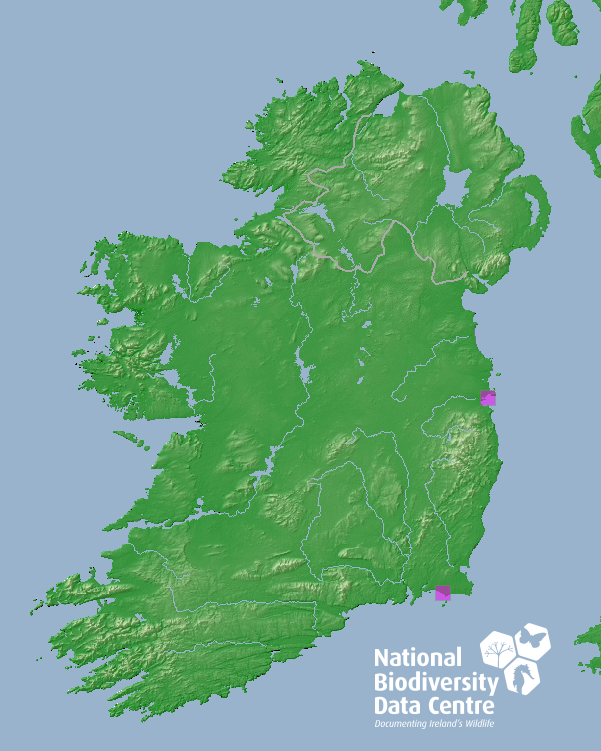 Wetland/open ground; salt-marsh meadow on the Atlantic and Fennoscandian fringes of its range; exposed, vegetated, sand and gravel banks of major rivers; irrigation ditches and dry beds of seasonal rivers (torrents) in southern Europe; cruciferous crops over much of Europe and a wide variety of crops in the Mediterranean basin.

Flies within 1m of the ground, among low-growing vegetation, especially along the edges of ditches and water courses; in shorter vegetation types (e.g. Limonium) this species flies lower, so that it remains within the vegetation cover; as easily detected by use of a sweep net as by direct observation.

April/October in southern Europe, with most records elsewhere from described and figured by Bhatia (1939); biology detailed by Dusek and Laska (1974) and Marcos-Garcia (1981). The larvae are aphid-feeding on herbaceous plants, and have been recorded on Brassica, Chenopodium, Nicotiana, Onopordon and Sonchus.

Goeldlin (1992) who figures the male terminalia; Speight (1988a). Discovery by Goeldlin (1992) of the alpine species S. estebani, which is extremely similar to S. rueppelli and has been confused with that species in the past, leaves records of S. rueppelli from cooler parts of the Alps and the Pyrenees (S. estebani has not been found in Northern Europe) open to question. These two species may be separated using the key provided by Goeldlin (1992), but care is required, since the abdomen of S. rueppelli is more variable in overall shape than is indicated, so that, in males in particular, the more typical clavate form can be absent. The male terminalia of both S. rueppelli and S. estebani are figured by Goeldlin (1992). The most comprehensive keys to European Sphaerophoria species that include S. rueppelli are those of Haarto and Kerppola (2007a) and Bartsch et al (2009a). The adult male is illustrated in colour by Stubbs and Falk (1983), Torp (1994) and Bartsch et al (2009a). The latter authors also provide a coloured figure of the abdomen of the female.

From southern Norway and Sweden south to N Africa and the Canary Isles; from Ireland east through central and southern Europe, including Greece, Turkey and Mediterranean islands into Asia Minor, Russia and Afghanistan and on to the Pacific coast, China and Korea; in eastern parts of the Afrotropical region south to Kenya. It is also very localised in northern Europe, where it reaches only the southern edge of Scandinavia. But further south it becomes more frequent and is frequent in early seral-stage habitats in southern Europe. In continental Europe this species is noticeably associated with ruderal communities and, in southern Europe, with various crops.

Added to the Irish list by Speight (1976b), based on a solitary male collected from Bull Island, Co.Dublin. It was suggested by Speight (1976b, 1985a) that S. rueppelli is not a resident Irish insect, the only known Irish specimen being regarded as a migrant. Since then there have been no published records of this species in Ireland. However, recent intensive search of the Bull Island locality from which the record derives has resulted in location of a dense population of S. rueppelli, occurring at the junction between salt marsh and sand dune in this estuarine site. The adults occur within a band of Juncus and Limonium some 20 metres wide and 1 kilometre long, which they seem rarely to leave. Some other Irish localities where similar salt marsh conditions occur have been searched for the species, but this has not resulted in additional records. Nonetheless, it would seem likely that careful examination of this habitat during July could reveal the presence of S. rueppelli elsewhere in Ireland. Since S. rueppelli is known from only one locality in Ireland where it would seem to be resident, and has to be regarded as extremely vulnerable to extinction here. It should be included in any listing of insects requiring protection throughout the island.