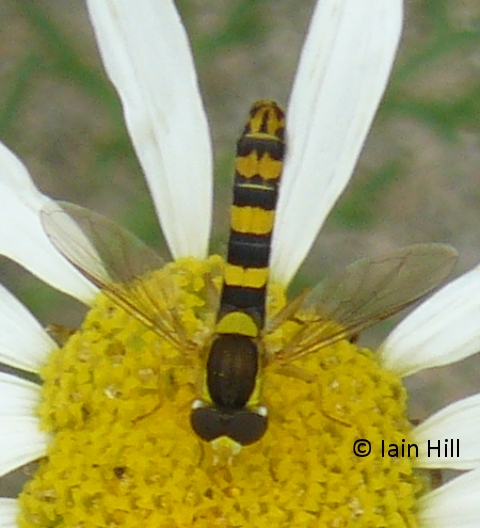 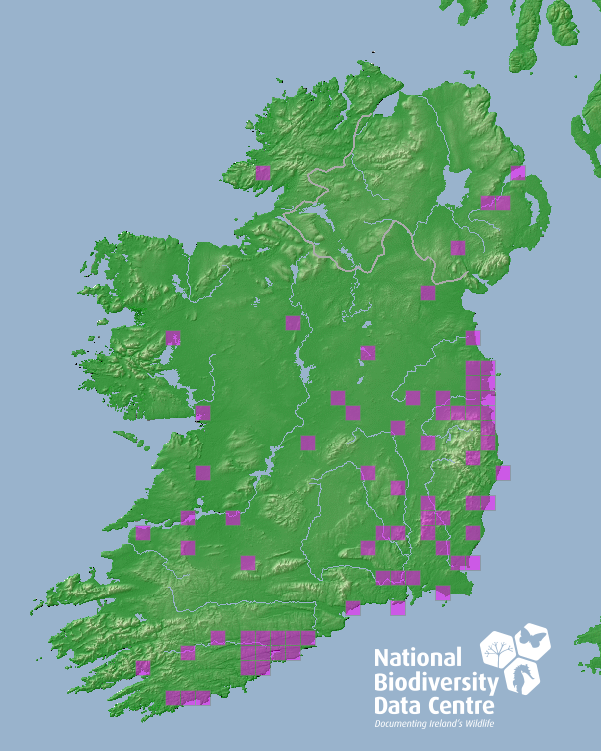 Open ground; grassland up to and including the alpine grassland zone; grassy clearings in dry woodland; heath, garrigue and suburban gardens; salt-marsh; predominantly coastal at the northern edge of its range; further south distinctly anthropophilic, occurring with various crops and along hedges and roadside verges. Nearly all Irish records of this species are derived from coastal localities, usually dune systems, though a few are from unimproved/ improved grassland. This contrasts sharply with the situation over most of W Europe (including Great Britain and Denmark, where conditions are in many ways similar to those in Ireland), where S. scripta is one of the most frequent and widespread of hoverflies and occurs in nearly every sort of grassland and open ground, including suburban gardens. A second feature of the Irish records is that they are nearly all derived from the period July /August. Put together with the knowledge that S. scripta is a strongly migratory insect, these facts provide a strong basis for postulating that S.scripta may well be a non-resident species in Ireland, and that the Irish records are due to annual migration to the island, with subsequent establishment here of only temporary colonies. The few early records - one from Belfast, one from Dublin - may indicate that the species does overwinter in Ireland on occasion. In stark contrast to elsewhere in Europe, in Ireland S. scripta cannot be regarded as a primarily anthropophilic insect. It is difficult to believe that its failure to occur generally in the farmland landscape in Ireland is due to climatic conditions, since this hoverfly is abundant and widely distributed from the Mediterranean to northern Scandinavia. However, if climate is the controlling influence then the current phase of climatic amelioration should trigger an explosive spread of S. scripta in Ireland in the very near future and this species would seem an extremely appropriate target for climate warming studies here.

April to beginning November (May/September in more northerly latitudes/higher altitudes and probably all the year round in southern Europe). Larva: described and figured by Goeldlin (1974); aphid-feeding on herbaceous plants, including various crop plants e.g. Avena, Brassica, Cichorium, Lactuca, Triticum, Vicia. Overwintering in this species apparently occurs as a puparium (Kantyerina (1979) in the grass-root zone. Barkemeyer (1994) provides a survey of the literature on the biology of this species. The morphology of the chorion of the egg is figured by Kuznetzov (1988).

A highly migratory species; southwest Greenland, Iceland and Fennoscandia south to the Mediterranean, the Canary Isles and N Africa; from Ireland eastwards through much of the Palaearctic to the Pacific coast of Asia; Kashmir and Nepal.  Elsewhere in Europe it is widely distributed and common, becoming abundant in southern Europe, where it is an extremely anthropophilic insect.

Recorded as occurring in Ireland in Coe (1953). The majority of Irish records of S. scripta are from close to, or on, the east coast. Perhaps this is indicative of limited, intermittent immigration of the species from Britain?? Certainly, S. scripta is apparently entirely absent from Ireland in some years, though there seems no obvious reason why it should not establish itself here. The present uncertainty over whether it is resident effectively makes its conservation status indeterminate.