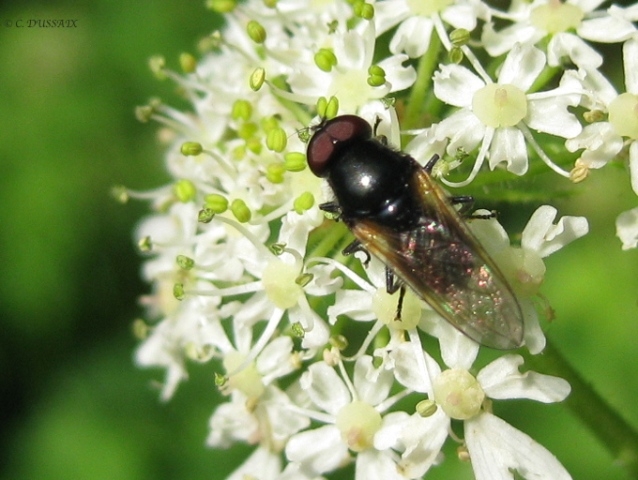 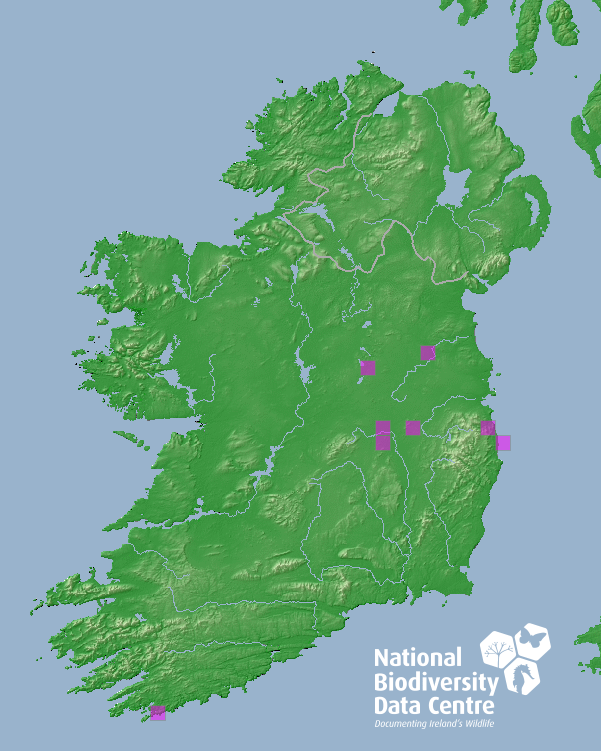 Deciduous forest/wetland: open areas in deciduous forest; montane, unimproved grassland, plus unimproved grassland up to above 2,000m in the alpine zone; fen. As is the case with a number of other Cheilosia species, C. impressa occurs in rather different biotopes. In Ireland it is to be found in fen in parts of the midlands, and in the south-west it turns up in deciduous woodland. Its other haunt in Atlantic parts of Europe is chalk grassland, in which it may be found in southern England, while in the Alps it occurs up to the level of subalpine grassland. The explanation for the unlikely combination of environmental preferences exhibited by C. impressa is almost certainly to be found in the host plants used by the larvae. But this will remain conjecture until the host plants are better known. At present, its only definite foodplant is Arctium, which certainly doesn't occur in all of the habitats where C. impressa is found. In Ireland, C. impressa appears to be only partially divoltine. Further south, in parts of the Atlantic zone and in central Europe the second generation is more pronounced.

May/July and August/September (with peak in July), but the second generation described and figured by Schmid (1999a), from larvae found feeding externally on the rootstock and underground stem-bases of Arctium. This species very probably has alternative food plants, since it may be abundant where no Arctium is present, for instance in alpine grassland. Stuke (2000) and Doczkal (2002) report egg-laying by this species on Eupatorium cannabinum and numbers of teneral specimens have been found drying their wings on large Rumex, in grazed alpine grassland where no other large herbs were present (MS).

van der Goot (1981), Vujic et al (1998). The adult insect is illustrated in colour by Bartsch et al (2009b) andTorp (1994). C. impressa and its close ally C. schnabli Becker are apparently unique among European Cheilosia species, in possessing a distinct, knob-like projection baso-laterally, on the external surface of the fore coxae in both sexes (Vujic et al, 1998). This remarkably useful feature has been ignored in keys (e.g. Ball et al, 2002; van Veen, 2004), except for those of Bartsch et al (2009b), where it is also figured. C. impressa and C. schnabli are very similar in appearance, but the surface of the mesoscutum is fine-punctured in C. schnabli, whereas it is coarse-punctured in "Neil Reid" C. impressa. Additional features are provided by Vujic et al (1998), who also figure the male terminalia of both taxa. C. schnabli is so far known only from the Balkans and the Caucasus, but within its range can occur with C. impressa.

Fennoscandia south to the Pyrenees and north Spain; Ireland east through central Europe to European parts of Russia and on across Siberia to the Pacific.  In continental Europe it is both widespread and frequent over much of the continent, though it does not reach further north than the southern edge of Scandinavia. Eastwards it is found through Eurasia to the Pacific, making it one of the most widely ranging Cheilosia species occurring in Ireland.