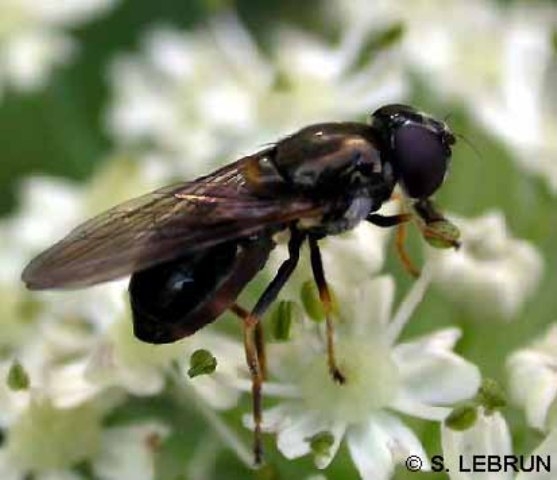 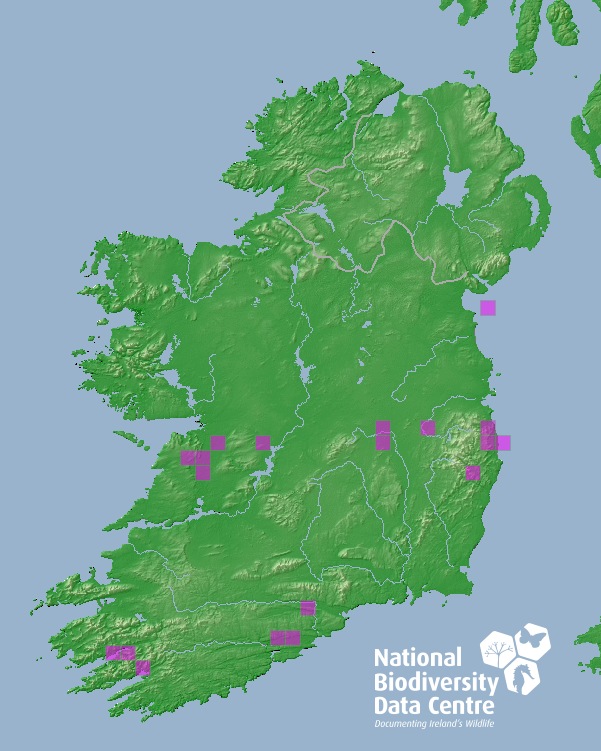 A wide range of types of forest, from northern European conifer forest to Mediterranean maquis, but not apparently associated with Betula, Fraxinus or Picea. C. scutellata is primarily a forest insect, occurring with a wide range of humid forest types, both deciduous and coniferous and there is no indication that the ecology of this species in Ireland differs from what is observed elsewhere. The scattered records are from mature deciduous or mixed woods at low altitude.

Frequently found on low-growing vegetation and bushes within woodland, in the dappled sunlight of small glades etc.; also along tracks and at the edges of clearings.

May/September and April/October (or even November) in southern Europe. Larva: described and figured by Rotheray (1990); well-known as tunnelling the tissues of various large woodland basidiomycete fungi, especially Boletus and Suillus (Dely-Draskovits, 1972).

Fennoscandia south to Iberia and round the Mediterranean to Greece, Turkey and N Africa; from Ireland eastwards through Eurasia to the Pacific coast. Given as occurring in Ireland in Coe (1953). In the Atlantic zone of Europe, this is a common and very widespread species, normally found almost anywhere there is woodland of deciduous trees or pine. However, C. scutellata does not seem to have any clear association with birch or ash woods, or with Picea, which may account for, at least in part, the paucity of Irish records, though it does not entirely explain the lack of records from conifer plantations in Ireland. It is not known which large basidiomycetes are used by C. scutellata larvae (the larvae mine the tissues of the fungal fruiting bodies) in Ireland, but the general scarcity of the fruiting bodies of these fungi in Irish woods is all too apparent to anyone who embarks on autumnal fungus forays! Elsewhere in Europe, this insect is usually found in large numbers at localities it frequents.

In Ireland, it is unusual to encounter more than one or two specimens. This presumably reflects the lack of old deciduous woods here, it being in ancient woodland that large basidiomycetes are most in evidence. Although by no means common, it is not recorded so infrequently as to yet be regarded as under direct threat. But there is no basis for concluding that the present situation is stable. If, as seems to be the case, C. scutellata does not inhabit Betula or Fraxinus woods and will be unable to utilise plantations of introduced conifers at least until they have been in situ for some hundreds of years, then the resource base upon which it is dependent in Ireland is oak woodland, planted beech woods and old pine plantations, all of which continue to dwindle. If this analysis of the interplay of factors affecting C. scutellata is largely correct, then it can be expected that this insect will become increasingly scarce and progressively dependent for its survival upon protected sites containing oak woods. It should probably be regarded as vulnerable here.