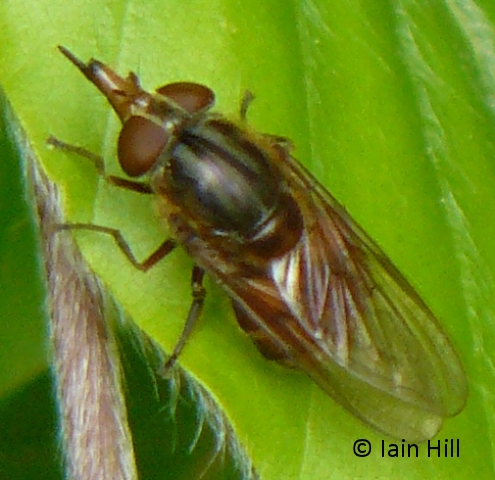 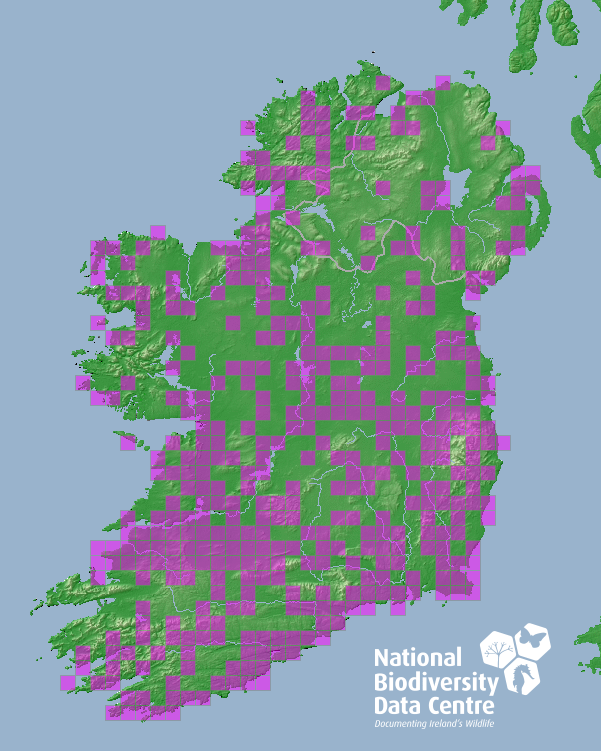 Distinctive hoverfly due to its long snout

Forest/wetland and anthropochorous, occurring most frequently on land where cows are grazed, whether in the open or in woodland; otherwise in alluvial forest and beside streams and rivers in forest up to the Fagus/Picea zone. With cattle and beef farming well-nigh ubiquitous in Ireland, so is Rhingia campestris, whose larvae feed in cow dung. Here, it is thus a classic example of an anthropophilic syrphid. The question of what R. campestris larvae can use as alternative foodstuffs has not been adequately addressed, but nutrient-rich, water-logged concentrations of decaying vegetable matter of some form other than cow-dung very probably can be used by this species, since it can occasionally occur in an apparent absence of cows, for instance in alluvial hardwood forest. However, alluvial hardwood forest is now absent from Ireland and it can reasonably be said that the continued survival of R. campestris here is almost entirely dependent upon current climatic conditions and the livestock management practices adopted in the beef and dairy industries. If livestock management practices were to change towards keeping the animals more-or-less permanently in pens, as has happened in some parts of Europe, R. campestris could be expected to disappear from the Irish countryside. Similarly, if climatic change were to result in long, dry summers in Ireland, this species would be expected to decrease in frequency and become restricted to wetter parts of the island. There is clear evidence for loss of populations of some dung-feeding insects caused by the blanket application of the systemic helminthicides generically known as Ivermectins. But there is an absence of published research data on the effects of these chemicals on Rhingia campestris and all that can be said at present is that, since Ivermectins were introduced, R. campestris populations do seem to have become more localised in time and space than previously, though, in Ireland at least, this syrphid remains both frequent and well distributed.

Hedgerows, clearings, tracksides etc.; flies up to 2m from the ground; settles frequently on foliage; active under overcast conditions.

May/September (plus April and October in southern Europe), with peaks in June and August. In drier parts of Europe the August generation may be extremely localised. Larva: the subaquatic larva was described and figured by Coe (1942), from larvae reared from moist cow-dung. It is illustrated in colour by Rotheray (1994). The species is today closely associated with cattle over most of its European range, but can occur where cows are absent, e.g. alluvial forest, and the larvae can be presumed to develop also in rich, moist accumulations of rotting foliage other than cow dung.

Visits a wide range of flowers, including many pink flowers which have concealed nectar sources, making them unusable by other flies with less attenuated mouthparts.

From northern Fennoscandia south to the Pyrenees, northern Spain and the Mediterranean; from Ireland eastwards through most of Europe into European parts of Russia and the Caucasus; throughout Siberia to the Pacific coast; Mongolia.The practice of keeping cattle penned in cow-houses and feeding them cut grass etc., throughout the summer, is now spreading in Europe and R. campestris is all but absent from regions (e.g. much of northern France and northern Italy) where this regime now predominates. Similarly, the use of the systemic pesticides, the Ivermectins, in cattle, appears to be causing a decrease in the frequency of R. campestris at present, though there is as yet no experimental work on the degree of toxicity of these chemicals to Rhingia larvae - Ivermectins excreted in cow-dung are known to be lethal to dung beetles (Aphodiidae etc.). It occurs widely through the Palaearctic region, from the Atlantic to the Pacific, but maintenance of large populations seems to be mainly dependent upon presence of cow-farming in which pasturing of the animals is practised during the growing season. In southern Europe the species becomes much more localised, occurring within forests grazed by livestock.

Recorded as occurring in Ireland in Coe (1953). There are suggestions (see Speight et al, 1975) that R. rostrata (L.) has been found in Ireland, but there are no substantiated records. The only Irish "R. rostrata" specimen that has been traced is in the Morley collection in the Ipswich Museum (Suffolk, England). Through the good offices of the curator (H. Mendel) it has been possible to examine this specimen, which proved to belong to R. campestris. R. campestris is common and generally distributed in Ireland and much of the Atlantic zone of Europe.