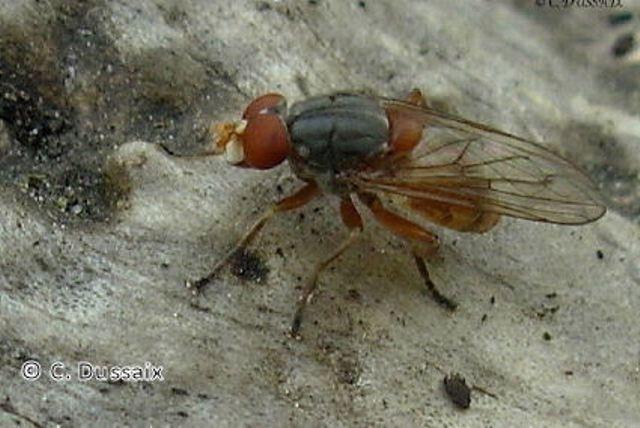 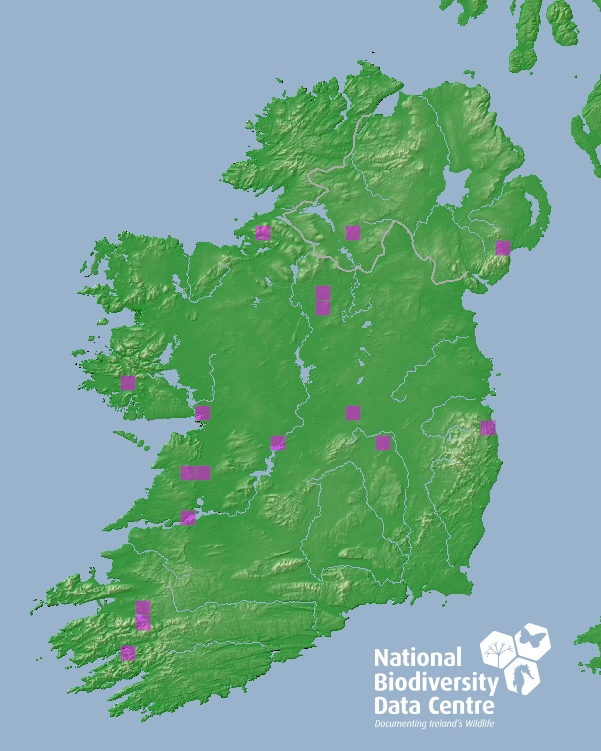 Forest; deciduous forest, with mature Acer, Alnus or Fraxinus. B.scutellaris usually occurs in Ireland in association with overmature ash (Fraxinus) and sycamore (Acer pseudoplatanus). The introduced sycamore provides an alternative tree host where ash is lacking and is also used when ash is present. Overmature elm (Ulmus) were used where available until they were entirely eliminated by Dutch elm disease. This insect seems to require a woodland micro-climate for its survival, since it does not seem to occur on isolated trees, or in hedgerows, though it may, on occasion, be found in association with tree lines of overmature trees. It thus has to be regarded as strongly anthropophobic in Ireland.

Flies back and forth, pendulum-like, in patches of sunlight beside living trees exhibiting sapruns, rot-holes or trunk-base rot and standing within woodland; settles frequently on foliage in the immediate vicinity and on the tree trunks themselves, where these are in the sun; when sunlight disappears B.scutellaris disappears from the vicinity of these trees, presumably moving up to the canopy; visits flowers of low-growing plants in the shade and the flowers of trees.

Mid April/end June. Larva: develops in sap-runs on Acer pseudoplatanus, Fraxinus and Ulmus glabra and in sappy, wet-rot situations beneath the bark of Alnus, Fraxinus etc.;described and figured by Rotheray (1996). According to Pellmann (1998), B.scutellaris has also been reared from Taxus and Ulmus. This species has also been found flying in numbers round the trunk base of an oak (Q. robur) showing extensive damage by Cossus, including weeping bark lesions.

See Key provided in StN Keys volume; Thompson (1980). The male terminalia are figured by Pellmann (1998).The adult insect is illustrated in colour by Bartsch et al (2009b) and Torp (1994). Recorded as occurring in Ireland in Coe (1953). This species appeared in earlier literature under the name bicolor (Fall.) and the unsubstantiated record of B. bicolor from Ireland, referred to by Coe (1953), is taken to refer to a record of B.scutellaris. B.bicolor (Fall.) is a distinct species, most reliably identified by the key in Thompson (1980). It occurs in the island of Great Britain, where it appears to be associated primarily with ancient beech (Fagus). There remain no confirmed records of B. bicolor from Ireland.

Denmark south to the Pyrenees; Ireland east through central Europe to Switzerland. B.scutellaris is widely distributed in western Europe, but, just as Fraxinus excelsior becomes more localised away from the Atlantic zone of the continent, so does B.scutellaris. It does not seem to occur north of Denmark and is largely confined to riparian gallery forests where ash occurs, or to areas with sycamore, in central Europe. This syrphid is apparently endemic to Europe.

Given that the only large, indigenous trees occurring in most of the Irish countryside are ash (Fraxinus) and that B.scutellaris larvae are associated primarily with this tree, it might be expected that B.scutellaris would also be a frequent species in Ireland. However, although B.scutellaris is widely distributed in the western half of the island it is confined to woodland locations, there being no records from hedgerow trees or small copses, and although it is not currently threatened, this species cannot be regarded as common.