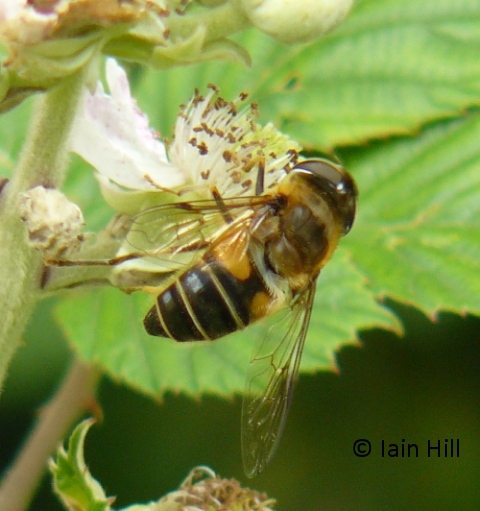 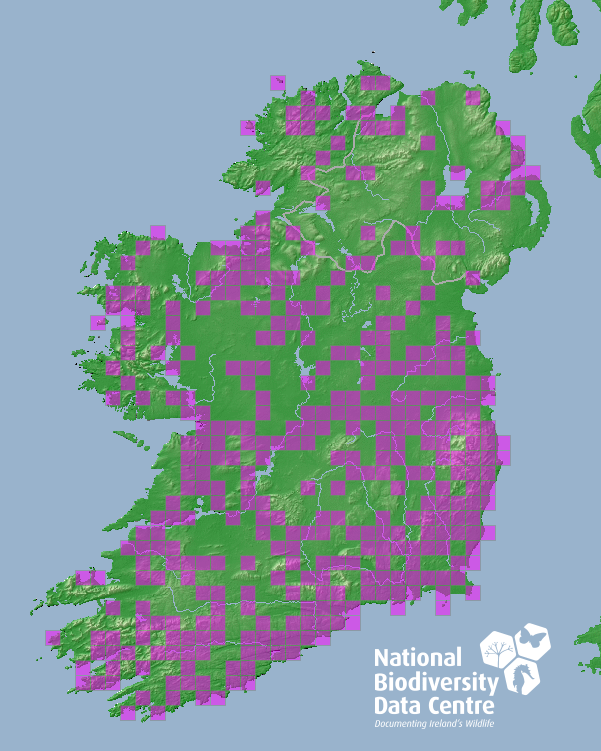 Wetland/forest; alluvial forest, fen and woodland streams and ponds; primarily anthropophilic, over much of Europe, occurring in farmland (especially where domestic stock are grazed in fields), suburban gardens and parks etc., but progressively confined to the immediate vicinity of woodland streams toward the southern edge of its range. The combination of a humid climate and extensive animal farming suit this species well and E. pertinax is well-nigh ubiquitous in Ireland, occurring in both natural and man-made habitats. It can occur in association with (and has been bred from) constructed wetlands, introduced to farmland for treatment of livestock waste. It is also frequent in wetland habitats in Ireland where livestock are not present. It is found on the wing here from February to November, without a break, and presumably manages an uninterrupted succession of generations throughout this period. It appears at the same time as do those species which hibernate as adults (in Ireland, Episyrphus balteatus and Eristalis tenax), but there is no evidence for adult hibernation in this species. Elsewhere in Europe it is very widely distributed and frequent in the Atlantic and continental zones, but does not occur above the tree-line in the Alps. Further south in Europe it becomes progressively restricted to the vicinity of forest streams.

Flies round bushes and shrubs; frequently settles on ground by water, e.g. at the edge of streams, ditches; males hover over paths etc. at 1 - 4m; spends much time on flowers.

February/November. From the early start to the flight period, this species might be described and figured by Hartley (1961), from larvae in farm drains, wet manure and decaying vegetable matter in a pond. Dussaix (2005b) also reports reared the species from a manure heap. His observation of oviposition in E. pertinax at the edge of a pond demonstrated that the eggs of this species were laid at the water surface, and float.

Visits the flowers of a wide range of low-growing plants, bushes, shrubs and trees (see de Buck, 1990, for list of plants visited by this species).

Fennoscandia south to Iberia and the Mediterranean; from Ireland through much of Europe into European parts of Russia and Turkey; apparently not known beyond the Urals. Recorded as occurring in Ireland in Coe (1953). The 19th century Irish record of "E. similis", mentioned in Speight et al (1975) presumably refers to E. pertinax, though this cannot be confirmed. The name similis (Fall.) is now recognised as the correct name for the species known until recently as E. pratorum Meigen. E. similis is difficult to segregate from E. pertinax (Speight, 1988), and (under the name E. pratorum) has recently been found in Britain (Falk, 1990), though there are as yet few records there, albeit scattered from the Scottish highlands to the south coast of England. Despite its frequency in most of Europe, E. pertinax becomes confined to mountain ranges in southern Europe, where it is difficult to find other than in association with either wetlands or streams within forest.

E. similis could occur in Ireland and this requires to be borne in mind when determining Irish specimens which appear to be E. pertinax. E. pertinax is common and widely distributed in Ireland. This species is recognised as undertaking long distance movements in large numbers, in parts of continental Europe, but this behaviour has not been noted here. It remains unknown whether Irish populations of this species are augmented each year by immigration from elsewhere.