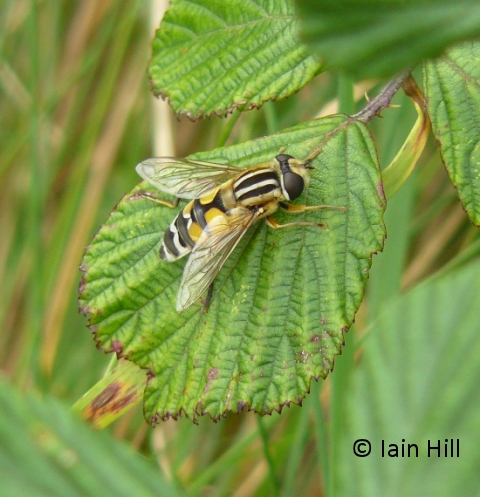 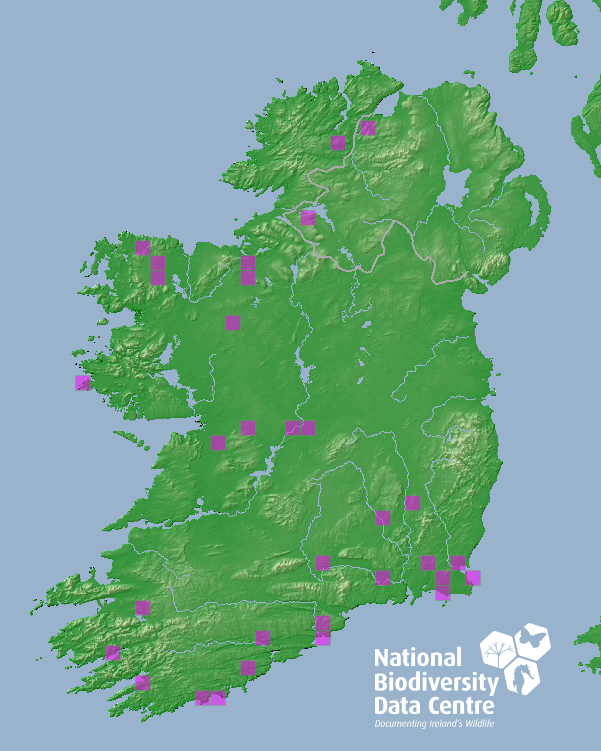 Wetland/open ground; river margins, seasonally flooded humid grassland and salt-marsh; becomes to a significant extent anthropophilic in southern Europe, where it frequents irrigation ditches in farmland. An enigmatic species in Ireland, giving no indication of undertaking the long distance dispersal movements here that seem to characterise it in central/southern Europe - it may occur on the continent in almost any habitat and up to above 2000m altitude, in situations in which it would be almost impossible for it to develop. Here it is a low altitude wetland species, but with no clear indications of the range of situations it can exploit. Until very recently, in Ireland H. trivittatus has been found only in lightly managed systems, like the ditched, seasonally-flooded grasslands along the river Shannon. There are recent records from roadsides in blanket bog, but they relate to adults found feeding at flowers and give no indication of where in the vicinity the species might be developing. Blanket bog itself is not a habitat of this species and it might be hypothesised that in such surroundings H. trivittatus may be using roadside drainage ditches receiving run-off from fields of improved grassland, that also occur in the vicinity. A novel habitat, so far almost entirely restricted to a few locations in the south-east (Waterford), is the chain of shallow pools comprising a constructed wetland used for treatment of organic waste from farms. These constructed wetlands have only been introduced to the Irish landscape since 1995, but can provide an alternative habitat for H. trivittatus, which has been found in considerable numbers in association with pools toward the lower (outflow) end of the chain.

Flies fast and low among ground vegetation, usually close to slow-moving water and is extremely evasive; occasionally settles on the bare ground of paths; to a significant extent a migratory species, the adult fly not infrequently being found at a great distance from sites appropriate for larval development.

May/October, with peak in August. Larva: apparently still undescribed, although larvae have been reared by Dolezil (1972) from eggs laid on a hay infusion in water. The eggs were laid in batches of 100-150 over a period of a week in September. Some of the larvae kept in the laboratory pupated in November, but the others, kept outdoors until frosts commenced and then in a cool cellar, pupated from 21 April onwards in the next year. The puparial phase lasted 2 weeks. The larva has also been found in liquid mud with a high organic content of animal dung and rotting vegetation. Bagachanova (1990) observed oviposition on plants bordering shallow water enriched by organic material and notes that the eggs of this species float in water. From rearing the species under laboratory conditions she established that H. triviyttatus overwinters as a larva.

See Key provided in StN Keys volume. This species appears in some recent literature e.g. Peck (1988) under the name parallelus (Harris). But it can be shown that application of the name parallelus to this species is unjustified (Speight, 1988). The female closely resembles those of H. affinis and H. hybridus in the field and these species may be found in flight together. The adult insect is illustrated in colour by Bartsch et al (2009b), Kormann (1988), Stubbs and Falk (1983) and Torp (1984, 1994).

From Fennoscandia south to the Mediterranean and from Ireland eastwards through Eurasia to the Pacific, including Iran and Afghanistan.